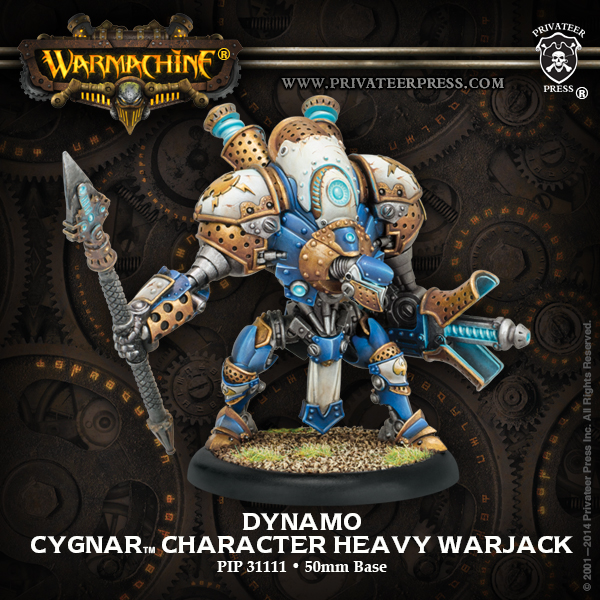 Thunderhead was pre-affinity so he doesn’t count. And well he is a doosey. This guy brings a nasty gun combination with a decent powered reach spear for mangling some metal. And Nemo makes him more uber awesome then he already is.

He is a stormclad chassis stat wise. That bring a decent MAT and average RAT. Respectable DEF12 and a tad low ARM18. He is a Nemo creation so of course he is immune to electricity.

Affinity Nemo- He’s Nemo’s jack so of course he does something cool with him. And were not talking about he changes color , were talking about rerolling his gun’s attack rolls while in control area. SICK!

Chain Reaction- He has a built in damage synergy bonus. He hits you, he gets to hit you +1 damage. This means his last attack will usually be hitting +4 damage making that wimpy POW 16 spear a little more respectable.

Insulated- Friendly base to base are immune to electricity. This can help Nemo3 with bouncing.

Nemo gets to use him in all his theme forces. My weathermen tier 2 is permanently altered!

His cannon is his bread and butter if I ever saw something to make people sad. It has multifire so that is 4 shots to stuff with 2”. Its 10” Pow12 and benefits from the Chain Reaction. This means that first shot is Pow 13 and that last one is 16!

To round it all out he has set defense, meaning that Def12 is 14 vs charges!

What’s the best way to be DYNAMIC?
Obviously Dynamo wants to be with a Nemo.
Nemo1:
– Up to 5 focus, a +2 damage buff, and locomotion makes this guy scary. Not to many heavies want to be on the other end of this machine.
Nemo2:
– Energized, a +2 damage buff makes this guy a great heavy. Not as cool as Nemo 1, but Nemo 2 is his own beast.
Nemo3:
– Feat makes the gun just hilarious. Throw in some boosted damage rolls and that is a whole bunch of pain. You can also get away with using some non immune electric stuff base to base with Dynamo since they will gain bounce protection. Dynamo up in the paint with a ranger base to base with him giving that stomrstrider a much easier to hit roll!
Lt. Jakes
– SideKick plus set defense means Dynamo is sitting on an insane defense for a heavy vs charges. Average MAT will need double digits to hit him on the charge.
Haley2
– No comment needed…its Haley2
Kara
– I actually think Kara gets a bunch out of Dynamo. It has a respectable gun, it can utilize her feat, and it just such a versatile jack. Refuge on Dynamo can mean it can walk up and take some boosted shots and then walk back to stay out of bad spots.

What to do vs Dynamo?

If you can get the alpha on him outside of charging, like a heavy’s 2nd 3rd 4th and 5th attack you can make quick work of dynamo. He is only Arm18 and probably wants damage buffs so will most likely not be sporting Arcane Shield.

Shooting. At only Arm18 he can definitely be plinked to death. Hyperion’s main gun is doing straight dice…which means Dynamo is going to be hurting!

So BOLS, what do you think of the new character jack for Cygnar? I think he is a monster. I am a little bias as a cygnar player. Please share your comments below.