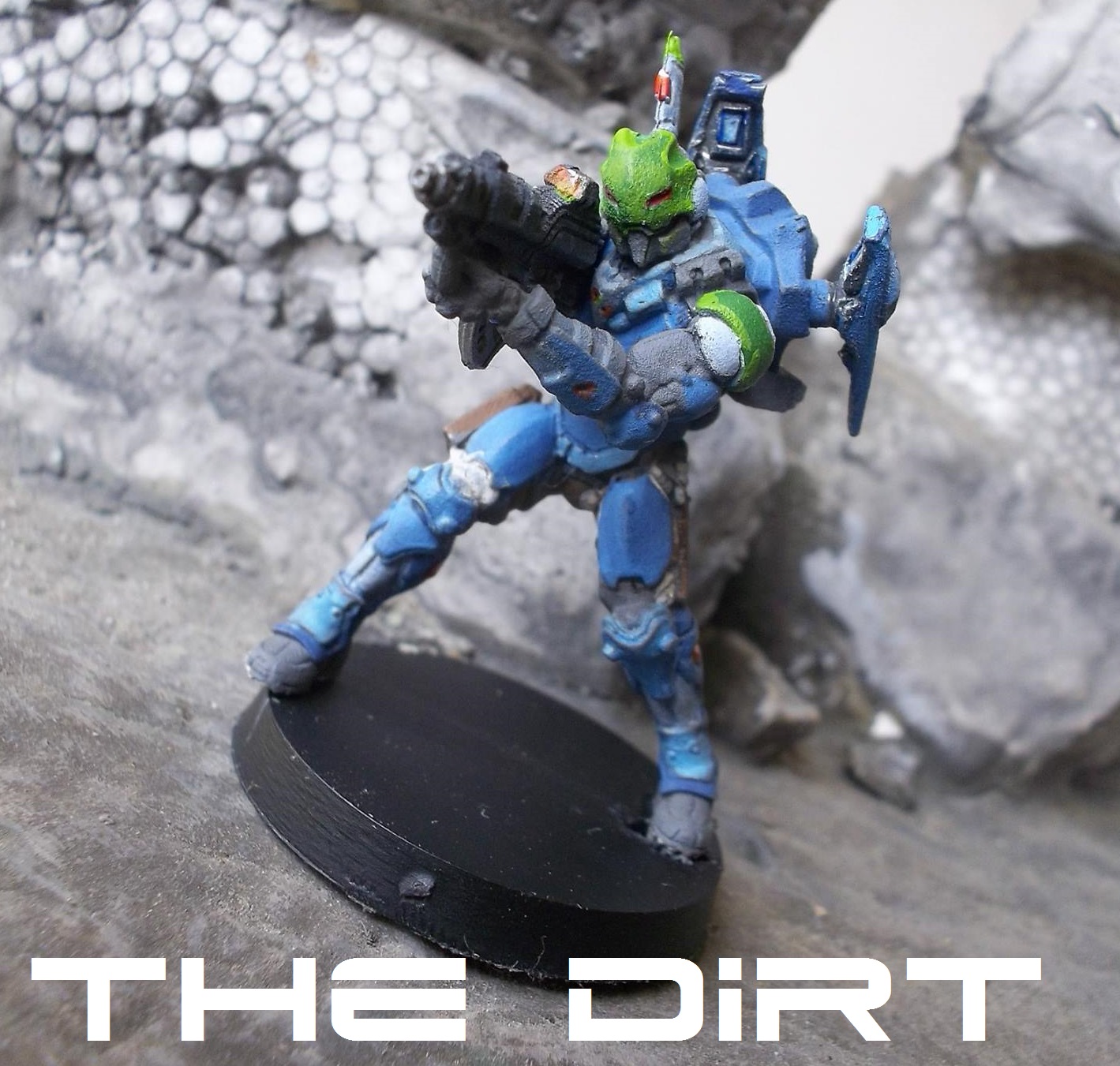 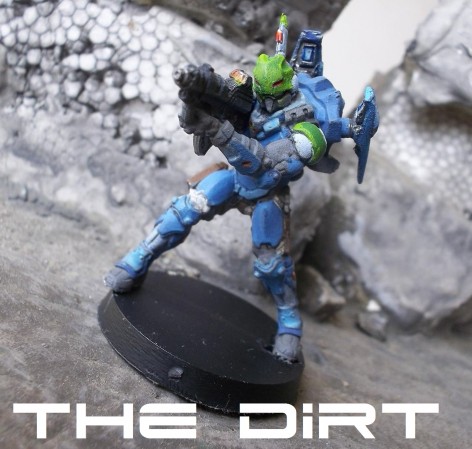 GenCon is 81 days away, so I think it’s time to talk about all the Infinity Inspired (non-tournament) goodness that can occur at GenCon and how those things have continued to inspire.  Photo by  Calabozo Criollo.

Welcome back to the DiRT.  I had to take a few weeks off, so for those that are just finding me for the first time, welcome.  The DiRT is Doremicom’s Infinity Related Thoughts.  This weeks issue is about Infinity Inspired Games.  What exactly do I mean by this?  It’s scenarios where Infinity Rules are taken but perhaps modified in some way to accommodate a slice of Infinity life that might not be strictly war.

The NEWS – Being Exposed to Infinity Related Events at GenCon 2013

My first exposure to this was observing non-tournament events at Gencon in 2013.  Guillermo (Infinity handle Magno) had an event which blew my mind away.  Multiple players controlled individual models but acted as an Infinity group.  I covered this in an earlier DiRT article, but I have to post the image again.

I don’t want to spoil any piece of this mission, but suffice to say the story arc and objectives were well developed.  The rules governing how models consumed orders, as well as how combat worked against “the Fiddler” had to be adjusted from the normal Infinity rule set to make this event happen.  This success led to two separate events being run in GenCon 2014.  One by Magno and one by Warsenal.

The Skinny – Creativity expands in GenCon 2014

Photos in this section provided by Cervantes.

Laid out within the Infinity rule books is the back story on how Raichos (Morat TAGs) have to go through an initiation, defeating animals in the wild without their weapons.  Magno brought that element from the Infinity Canon out to the table top as multiple players in Raichos fought to become fully initiated into the Raicho ranks.  The Infinity story line is incredibly rich.  It is a completely higher level idea to not only read, but to effectively live through these other aspects of the Infinity universe. 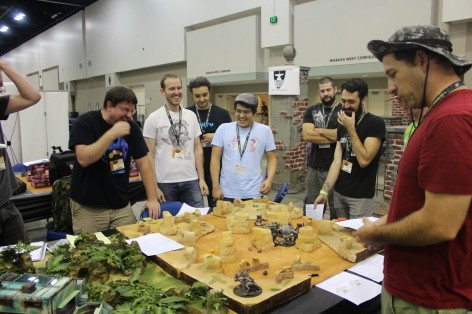 Warsenal expanded on the Morat themed events at GenCon with a jail break scenario that came with just an impressive, unlikely to ever be duplicated, scenery piece. 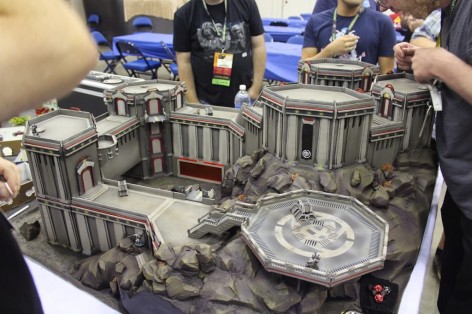 I was unable to sign up for either of these events, but both were so entertaining that just witnessing the action was a treat.  Remember that there are only 81 days left before event registration for GenCon 2015 occurs.

A sneak peak at Infinity Events that will be run at 2015…. The Fiddler is coming back (although I’m expecting quite a few rules changes due to N3) AND Rashiriya (Road Rash + Hashiriya (fluff illegal racing) = Rashiriya).  Rashiriya will allow bikers from multiple factions compete in a race that encourages riders to take one another out.  Magno has confirmed that the ruleset is 90% complete, but I will hold off from sharing them just yet.

The DiRT – Infinity Events Outside of GenCon

I will state right now that expanded rule sets should NOT be used to replace Infinity rules for normal gameplay or tournaments.  But for one-off events, I cannot encourage their development more.

Between GenCon 2013 and 2014, I attempted such an event.  A dynamic story driven Infinity event.  Subsequent rounds were dependent on what happened the turn before.   I had an entire information tree that I had to reference to keep story elements safe.  Introduced a notion of lower gravity to allow for hard to reach objectives. 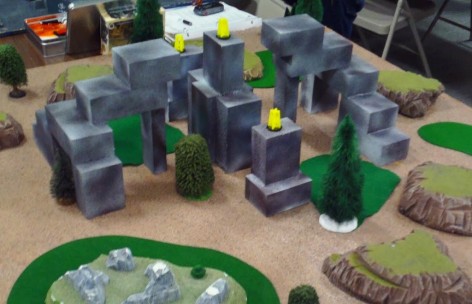 The final mission required attendees to break themselves into two teams and fight on two boards that controlled elements of the same game.  For more information on this event, refer to these three articles:  Part 1, Part 2, and Part 3.  The only thing I cannot stress enough…. find a group to playtest your creation BEFORE you let loose your creation in an event and plan for things to not go right.  I remember having a really difficult time with doing this for my event as I wanted to keep as much of it a secret as possible.  I stretched play testing over 10 weeks to hide the story arc away from mission rules.

In Durham, we just recently had a Dire States event: Shooting the Bull.  For our Sunday (non-tournament event) dlfleetw and Todd ran Infinity:Zero.  I am sorry that I could not get photos in time for this article, but I was amazed at the concept behind this series of rules.  Try to imagine Infinity mixed with first person shooter free for all and Bioshock.  Players controlled an authorized mercenary, who could get weapons and upgrades from lockers scattered around the room and the goal was to rack up as many kills as possible.  Death was temporary, and your character would respawn sans gear/upgrades.  The ruleset can be downloaded here Infinity Zero – Shooting the Bull – Standard.

I know these are only some of the examples of the creativity contained within the minds of the Infinity community.  For those I did not mention, please forgive me, but also get ahold of me as I’m curious about what other people are working on.

Generally speaking, I’m not a big fan of Kickstarter.  Not that I don’t like it, I’m just not sitting on Kickstarter every day waiting for something to show up.  But I had to share this one for ModCube.  It uses constructed cubes to act as multiple token states for models for various games.  Although the Infinity ones interested me the most.  There’s something about finding tools that make playing a game easier that I have to admit I’m a bit of an addict.  If you are interested, you can find their kickstarter here. 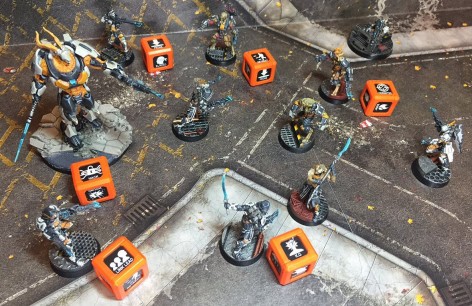 So that’s the the news, the skinny, and the dirt of dealing with expanding the Infinity Ruleset.  As always, you can find me here, on Facebook, or on YouTube.