It’s time to put another faction’s Reckoning goodies under the microscope. This time, it’s Cryx’s turn.

Deneghra3 has really been a tricky one for me to wrap my head around. It’s not so much that she is hard to understand. It’s obvious what she’s good at. She’s geared to getting lots of Mortality and Ghost Walk out wherever you need it and loading up jacks with focus. So when list building, the tricky part is narrowing your selection down to which models work best with abilities that can help everyone. With the possibility for so many easy Ghost Walk castings, the first place my brain went was to the Scavenger. Take a few of those guys, Ghost Walk them, Load Them up, fly to enemy caster’s face. To that end I think I’ll start by running her with some of those guys, mech thralls, and maybe an Afflictor if they’re out by the time she is. Since Shield Guard is what I’m interested in from the Afflictor, I guess a Bokur might do. But I can’t take one of them in her Theme List. So is it really worth taking her theme?

Like I said before, when you have a caster with easy access to Mortality and Ghost Walk, every choice is viable. Soulhunters and Bane Cav can really chew up an army when they’ve got spells like that to work with. You could even throw a Scourge or two out there to knock things down for them. Pistol Wraiths with Advanced Deployment also sound like a helluva good time. Cheaper Afflictors; also a plus. But she loses out on so many helpful things. I don’t think I’m ready to say which way is best to field her. Whichever way you go some kinda Shield Guard seems necessary. Even with Immunity to Knockdown that huge base of hers is a giant target.

I’m seeing a lot more potential with her now than I did at first. Her size seems less an obvious hindrance the more I think about it mostly because of her high Def and access to Shield Guard. WJ points +4 seems too much but barely so. There’s definitely a pattern with huge based casters being a little over costed but I digress. Overall I think Denny3 will win you games, but as of now I don’t think she’s top tier within the faction. 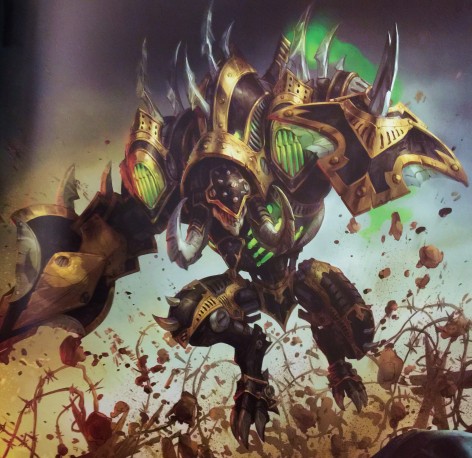 Barathrum what is up with you? All these crazy abilities and none of them seem to work together. There’s the whole drag below thing that makes me think you should be sent after infantry. But no reach means you’ll need optimum conditions just to kill more than three models an activation. Assuming I trigger Drag Below, a full advance back is unlikely to get you safe from a charge. That means Dig In won’t matter that much. I guess it could get you somewhere you could contest/score an objective. On the other hand, you have high P+S for the faction so that makes me want to send you after heavy targets. That’s really the most impressive thing about you. Those two P+S 17s. And why on earth are you Terminus’ pet jack? Counter Charge isn’t really impressing me either. Usually it’s just a way to get a model killed faster. Counter slam on the other hand… If you had that maybe we could talk.

The Shrike seems a bit more interesting to me but not enough to get the trumpets blowing. This little guy can trample through your opponent’s lines to hopefully chew on cowering solos. The Defiler could already do something similar with better threat and be an arc node. But once that Shrike has made its way to the backfield your opponent’s gonna gotta do something about it. And that can be trickier than it sounds. If they don’t have any knockdown, their whole line can be thrown out of whack because it can be tough to kill these lil buddies. I guess Extended Control would have been too much to ask?

The Soul Catcher strangely, seems the most interesting new piece for Cryx. He’s something I’ve wanted forever without knowing it: a means to deliver souls to all those models that don’t want to get within that measly 2″ Soul Cage range. You can never have too much focus. And these things are so cheap, even if you’re opponent doesn’t have souls to give up it’s no big loss. They can always get in the way or hang out near objectives.

So here we are now with the Sepulcher. I think this guy is another win. In most cases it should be an improvement over the Kraken. While it’s main gun has lost some range and pow over its predecessor, the increased AOE and Arcing Fire easily make up the difference. When you factor in the critical paralysis the Desolator just gets that much better. Its Spikers will be less effective against single wounders than the Kraken’s Flayers, but Burst Fire makes them better against bigger targets, including MMM type armies that are so popular lately. The necro-industry thing is very neat because it can be done any time during activation. After charging and finishing your attacks you can deliver some thrall love. Just make sure to plan ahead of time to have the new guys in formation with an existing unit. Finally, the Sepulcher’s melee attacks have pull which creates great charge lane opening opportunities. The loss of Meat Fueled and Kill Shot are kinda big bummers, but I still think the Sepulcher will see more play going forward than the Kraken. The 1 point cost reduction is the final nail for the older Colossal. Goreshade 2 will probably still like the Kraken at least.

~Hope you enjoyed the article. Would any Cryx players like to weigh in on the army’s new options?