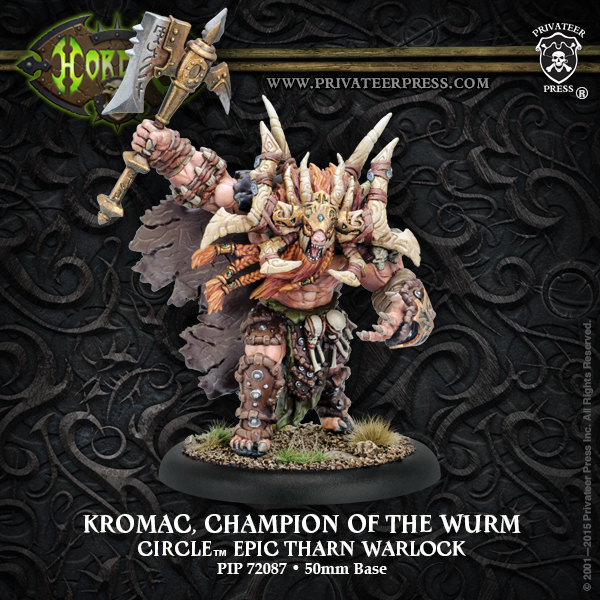 Kromac is back and he is sporting Madrak’s axe. Let’s see how to put him to use:

Kromac’s epic version has been out for a little while now and is he a monster.  Not always one of the most used rules in warmachine is pyschology.  However, you better have some fearless troops when you are hanging around Kromac because there will be multiple terror checks!

Kromac has a decent spell list.  I want to make a point of primal howl.  It makes enemy models taking CMD checks close by have a penalty.  Passing one LD 6 check is hard enough.  But, with the right list selection , you might have to take that CMD check multiple times.

Kromac hits HARD with his newfound axe.  And his feat makes everyone hit harder too.  Charges autohit and at an increased STR value.  This can be big in some of the armor skew lists that are hanging around.  But, it also helps with the high defense.

Kromac doesn’t deliver your beasts any faster then other circle casters but his feat gives them that real hitting power that you might not have to primal for.  Kromac can clean house himself with his heart token mechanic.  If he can hit, he can kill everything in his melee range outstide a colossal.

Lord of the Feast

Be sure to include Ghetorix and Lord of the Feast for terror shenanigans.  Druids are a good way to go as well since you can keep Kromac somewhat safe behind clouds and antimagic.

Infantry spam is something to consider with his feat letting you autohit charge attacks.

What do you think BOLS of Kromac2?  Is he on your hate list now?  Have you failed a terror check around Kromac yet?  Please tell us in your comments below.