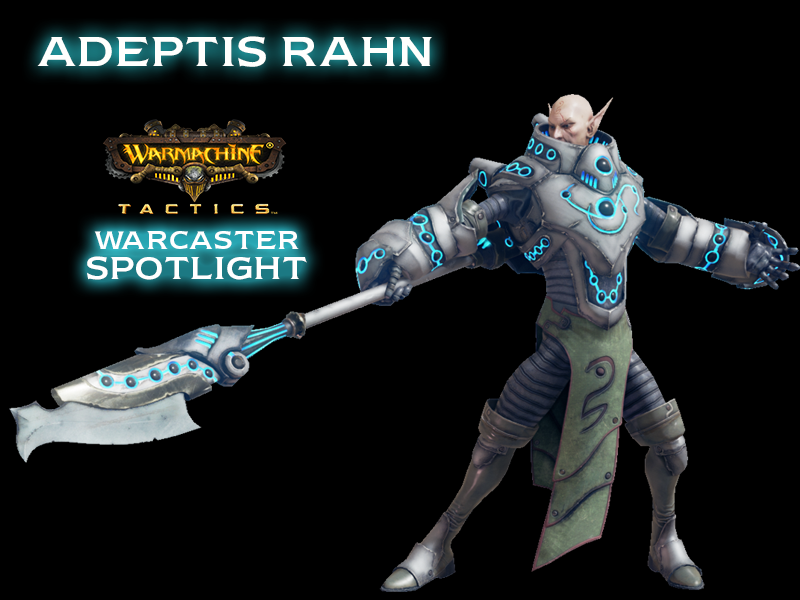 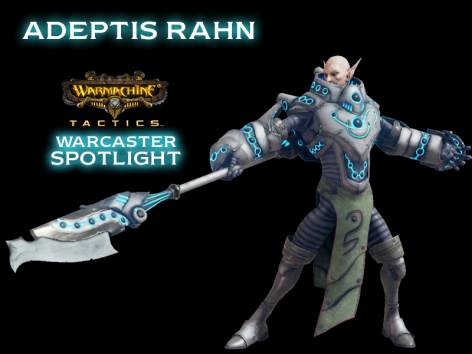 Are you looking for a powerful spell caster who can really impact the battle with their offensive and utility spells? Adeptis Rahn is the Warcaster for you!

Backround: Among the Great Houses, House Shyeel is known for their exceptional understanding of magical principles and how to apply them. And in this collection of powerful arcanists, Adeptis Rahn Shyeel stands above them them. As one of the most powerful arcanists born in a generation, he is a living embodiment of the battle mage discipline. With a wave of his hand men and machines alike are swatted aside, and he just as effortlessly brushes away entire volleys of incoming fire. He backs down to no one, no matter their rank, when it comes to matters he sees as his domain. With the control of raw force as his sphere of specialty, he has risen to a position of undisputed leadership.

Rahn is arguably an even more influential representative of his house then Consul Hyselle, to whom he answers. The consul may stand among the Nine Voices, but it is the adeptis who directly commands the house’s battle mages. And although not an artificer, the adeptis nonetheless has great sway over the design and final shape of his house’s myrmidons. It falls to him to demonstrate House Shyeel is an equal partner in the Retribution, sharing its risks and glories and not simply serving as a production source for myrmidons.

Abilities and Descriptions: Rahn is a very potent spell caster, with a strong focus on manipulating the battle field. Of the Retribution casters, he is often the most directly involved through his spells.

Balance: A melee weapon that deals 6 damage and has Reach, Beat Back, and Critical Smite

Chain Blast: 3-cost offensive spell. When cast, this spell is a 7 damage spell with a small AoE. But wherever this spell lands (either on the target or on scatter) then a second small AoE scatters from that point dealing blast damage to those hit.

Force Blast: 3-cost utility spell. Force Blast can only be used on a battlegroup unit, and enemies within 2 squares of the target are pushed 4 squares directly away.

Force Field: 3-cost defensive upkeep spell that can only be cast on Rahn. While Force Field is active, Rahn does not suffer collateral damage (from a slammed or thrown units hitting Rahn) and is immune to knockdown. Additionally, any AoE attacks that scatter will always scatter directly away from Rahn. (Force Field also prevents blast damage but Rahn’s Force Barrier already does this for him)

Force Hammer: 4-cost offensive spell for 7 damage, and the target hit by the spell is slammed directly away from either Rahn or the arc node he uses for the spell.

Polarity Shield: 2-cost defensive spell with dispersal. Units affected by Polarity Shield can’t be charged by any units in its front arc.

Telekinesis: 2-cost offensive/utility spell that deals no damage. If this targets a friendly, it hits automatically, but an enemy requires an attack roll. The target unit hit by this spell can then be placed 2 squares from its current location. A unit may only be affected by Telekinesis once a turn.

Feat – Arcane Alignment: Lasts for one turn. While in Rahn’s control area, friendly faction units gain +2 RNG to their non-channeled spells (not using an arc node) and their magic attack rolls and damage are boosted.

Suggested Tactics: Rahn is a master of manipulation. He uses his spells to give him near total control over the battlefield, and he uses this control to either gain the edge in combat, control scenario zones, or even create assassination opportunities. But while Rahn brings some very impressive spells, he is not a strong fighter himself and prefers to remain near the rear of the squad and provide his influence through arc nodes like the Chimera. He also does well with some House Shyeel Battle Mages in his squad as their Force Bolts become very powerful and much more likely to knock down units during Rahn’s feat.

His normal ways of directing the fight is through a combination of defensive spells to make fighting your units difficult, and offensive spells to manipulate their positioning and dictate how the fight unfolds. Defensively, this is primarily done through the spell Polarity Shield to give your front line immunity to charges, but even over the course of the game you can move this spell to various units such as one of your myrmidons to put them in more aggressive positions and still keep them safe from charges. Force Field is also rather useful against any squads with a large about of AoE attacks, but is primarily used to keep Rahn safe from any slams or throws to knock him down.

Offensively, he uses a combination of Telekinesis, Force Hammer, and Force Blast to control where units are in the battlefield. Force Hammer is very simple in its application, but Telekinesis has a myriad of uses. Using it to disengage a unit so that it can go charge someone else, or pull an enemy into charge range, or putting units off a flag or out of a zone to score. That last point pairs will with Force Blast as one trick you can do is if Telekinesis will not move a unit far enough to get it out of a zone, you can move that unit to somewhere near one of your battlegroup units and use Force Blast to then push it 4 squares away. The combination of these 2 spells will usually get that unit out of the zone and you can then score control points.

Rahn’s spells are very flexible and powerful, and reward a player for thinking through the possibilities rather than simply executing a prepared plan. And because his spells are very flexible, he can work with almost any squad composition. This makes him a very good Warcaster for players learning Retribution as he is the most individually potent of the Retribution Warcasters.

Differences from the tabletop: Rahn remains mostly unchanged from the tabletop. Force Field now sends blasts always directly away instead of choosing the direction as we do not have actions on your opponent’s turn. And even his playstyle is largely unchanged, and arguably more potent as his primary form of manipulation, Telekinesis, has fewer units that need moving to get to your goal. Players who enjoy Rahn’s playstyle of controlling the battlefield will find him very much at home in Warmachine: Tactics.

If you’re looking for a Warcaster who has a the tools to get the job done, no matter the odds, the you should take a look at Adeptis Rahn!

Better bring you mittens because when it Rahns it Pours!