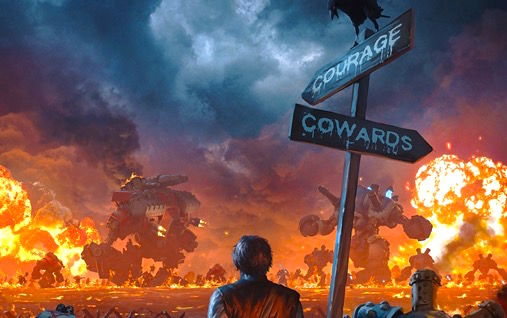 Organized play head honcho Will Hungerford gives us the details:

Over the last few weeks, we’ve talked a lot about the updated Organized Play offerings you can expect: Journeyman, Steamroller, Masters, etc. What we haven’t talked about yet is the new narrative league beginning this September. So, let’s do that right now!

“Crossroads of Courage” is the name of the narrative league starting in September 2016 and running until Lock & Load GameFest 2017. The league will be broken up into four different four-week long seasons, as well as a big team-based finale event at Lock & Load 2017.

So, what is “Crossroads of Courage” all about? Well, it’s hard to tell you much about it without giving away its many, many secrets. Ultimately, it’s about the choices we make, the consequences of those choices, and, well… it’s about karma. Each season, a player will choose to belong to one of two teams: Reapers or Sowers. Like narrative leagues in the past, Crossroads will have its own fiction, league scenarios, unique battlefields, special goals to achieve, and a very special league model each season. The story of Crossroads follows a young man by the name of Holden, and his fate is up to you, the players.

Holden will be swept up in the wars of western Immoren, and your actions will determine what kind of man he turns out to be. Will he become a valiant hero, a sinister villain, a despicable coward, a stealthy assassin? Your actions will shape him and will ultimately lead to the final decision of who Holden becomes at the Lock & Load finale.

You see, Holden is going to be a model for WARMACHINE and HORDES, not just for the league. During each season, you’ll get to play with the evolving form of Holden, his light and dark sides, his courageous and cowardly sides, but in the end only one form will emerge, and you get to decide which one that is.

In addition to the Holden cards that will come in each league kit, there will also be the Coin of Fate, a special metal coin that will have “uses” down the road in your games of WARMACHINE and HORDES. You’ll want to play in each league season to collect all of the Holden cards and the different coins. Luckily, the prizes for Crossroads are all participation prizes— you don’t have to “win” the league in order to get any specific prize.

A scoring system will determine the best Reaper and the best Sower each season, but no specific prizes exist for those champions. That information might just be useful in other ways, though.

Keep an eye out as we discuss “Crossroads of Courage” leading up to its release this September, and get ready to shape the fate of the Iron Kingdom’s newest hero/villain. This is all on you now.

Are you participating in any of Privateer’s organized play events?