40K: Everything Is Better With A Tentacle 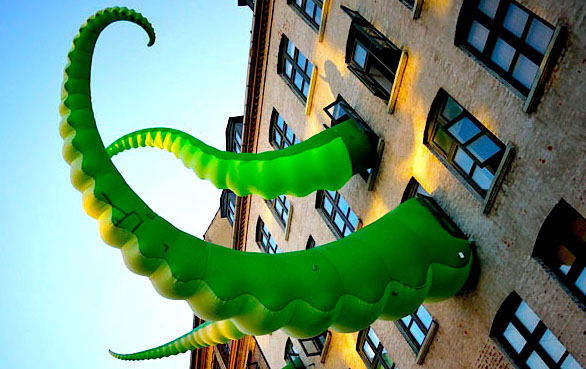 The Chaos Marines are the glue that binds the grimdark together; their allure is strong, and growing by the day.

Now before you taint my article with your vile, anime/Slaanesh visions of tentacles, let’s get this straight from the get-go: I’m talking about the wholesome, Tzeentch-approved mark of a Chaos God’s true favor to his glorious champions – a nice, slimy tentacle that replaces an arm or leg.  Maybe a neck.  One must account for the occasional really killer conversion after all.

At this point, you may be asking yourself “What the hell is he talking about?  I’m strangely attracted to his honeyed words, but what IS his point?”  Well my friends, I’m talking about what really makes us all love Warhammer 40,000 so much.  Let’s face it, a good setting is all about the bad guys.  And while you can sanely argue that there are no good guys in Warhammer 40,000, and that therefore everyone is the bad guy, it is Chaos and the Ruinous Powers that really makes it all work.

Warhammer 40,000 has evolved from its silly beginnings as a simple generic fantasy setting transplanted to space into a deep and unique science fiction setting over the last quarter century, but it’s Games Workshop’s take on Chaos that really has made it endure this long.  Cosmic horrors, eldritch alien civilizations and the fusing of arcane technologies with the worst xenophobic attitudes of mankind’s dark ages have all played their part in the attraction to this dark setting, but beneath it all is the supernatural horrors of the daemon, the witch and the corruption of the warp that makes it so cool.  Indeed, every significant event upon which the 40K setting is built is rooted in this taint of Chaos, from the foundation of Mankind’s Imperium during the Horus Heresy to the birthing of the fourth Chaos god, Slaanesh, due to the eons of vile and wanton practices of the Eldar.  All this, and space marines, of course.  Everyone seems to love space marines. 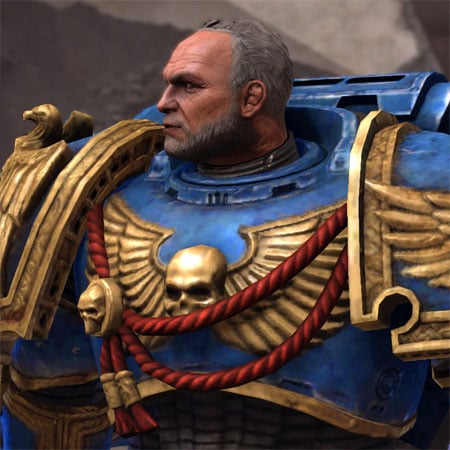 I’m awesome, and you know it.

Space marines.  Yeah, I can practically hear your Homer Simpson impression right now, little puddles of drool threatening to engulf the tiny plastic Astartes marshalled on your desk.  Everyone seems to love space marines – and GW knows it too.  And hey, who am I to say nay?  Space marines ARE cool.  They’ve just got that look that appeals.  But, consider this.  What could make a space marine even cooler?  That’s right – a tentacle.  Or, imagine this, all manner of other sinister mutations.  Horns, wings, extra limbs or eyes, a slithery forked tongue.  Yeah, now we’re talking.  Let’s throw in the practice of sorcery, binding dark spirits to blackened and tainted weapons and trafficking with daemons, and we’ve really got something.  That’s Chaos.  And Chaos is the thematic engine that drives it all.

There are many elements to Chaos in 40K – daemons, cultists, witches, traitor guard – but it’s Chaos Space Marines that bear the banners of the Dark Gods highest.  I still remember when I first fell to the Chaos powers, lured to corruption by an infernal tome whose title is only whispered from the lingering shadows now – Realm of Chaos:  The Lost and the Damned.  There were many things in that dread book that drew me in – descriptions of the Chaos Gods and their minions, the vast mutation tables, Chaos and Daemon weapons.  But more than anything else, it was the descriptions of the chaos space marines, particularly the Thousand Sons, and their misdeeds, that really started me down the dark path.  Space marines are cool, but chaos space marines are even cooler.  They can do, or be, anything.  The only limit is my imagination, and yours as well.\

Oh, I know what you’re gonna say.  “But, Kazzigum, CSMs straight-up suck in the game and on the table-top.  Why would I want to play those guys when I know they’ll just be punked by everyone, especially space marines?”  I’ve heard all the arguments.  The CSM codex was the first out of the gate in this new era of the game (6th and 7th edition), which is always a bad thing, as the designers inevitably always underpower that first codex.  Everything in the codex is overcosted.  CSM psychic powers are all terrible and the traitors don’t even get full-fledged 7-power disciplines.  The formations, relics and warlord traits CSMs have access to are all underpowered and bland.  GW refuses to grant CSMs any rules that evoke the original Traitor Legions and stubbornly foists newly fallen renegade space marine chapters upon us.  And perhaps worst of all, these CSMs, who were all formerly loyal space marines, have no access to a host of basic equipment that their loyalist brethren do (drop pods wherefore art thou?), for absolutely no thematically sound reason.

To all these arguments, and more, I can say but one thing.  You’re right.  They’re all true.  And believe me when I say, it’s a bitter pill to swallow.  And I used to let all this sway me too, for a time.  To get me down, to steer me away from CSMs, though not Chaos entirely, as Chaos Daemons have been both thematically and rules sound for some time.  But, ultimately, there is more to the game and hobby than winning – and besides, I enjoy a challenge.  There are ways to use the resources CSMs do have to cobble together a list that can still feel right, even if it’s not as potent or true to background as I’d like.  For example, by using multiple sorcerers equipped with spell familiars (the Black Legion’s Cyclopean Cabal formation is nice for this), running limited numbers of small Thousand Sons squads and lots of Tzeentch-marked chaos spawn, I can still run an army that really feels like a Thousand Sons army should.  A band of Chaos tainted sorcerers who hurl magic all over the battlefield, summon and bind Tzeentch daemons to their will and heedlessly sacrifice their former brothers that have succumbed to the Flesh Curse.  While I long for more, and understand it is not a match for tournament armies, I can still have a good time at my local store with such a list. 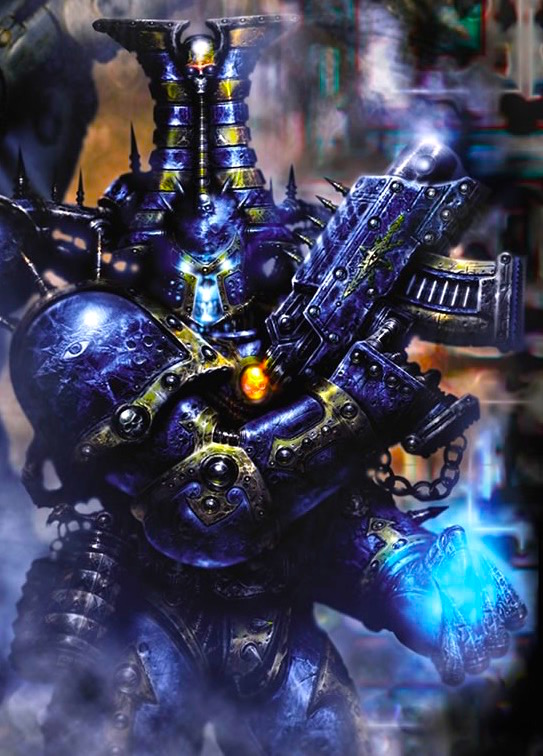 Considering what many of the other 40K armies have been granted over the last year by GW, particularly space marines, I understand that such a CSM challenge is not for everyone.  But before you dismiss the notion, consider again how cool Chaos is.  Think about the fact that everything that is awesome about 40K is because Chaos has made it so.  Think about the Horus Hersey.  There is a reason why the books are so popular – it’s because the Traitor Legions and their primarchs are corrupted by the Chaos Gods and then are tricked into turning on their brothers.  Think of that tentacle.

And if the whispers of “why would space marines turn on the Emperor for infernal power that appears so weak?” or “why are CSMs who’ve lived in the Eye of Terror for 10,000 years so pathetic in comparison to their loyal, younger brothers?” still haunts you, just remember this.  The Ruinous Powers are liars.  Just because they promised the Traitor Legions power and prestige, doesn’t mean they meant it.  Perhaps the traitors were led down the dark path with false promises and honeyed words.  Sometimes I think I was too, and that those at GW are the real Ruinous Powers.  I find myself thinking “Why can’t we have all these cool powers, formations and equipment?  Why GW??  Why?!?”  And when I do think these things, I grow bitter.  But nowadays, a just think of the bitterness as part of the CSM experience.  The Long War, after all, is nothing if not bitter. 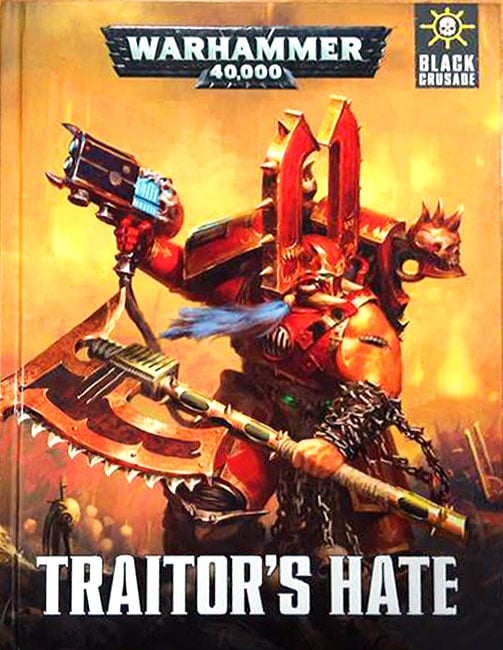 I feel a change in the wind.

Brimstone on the Wind

But if all I’ve said is still not enough to tempt you onto the dark path, let us look to the portents emerging from the ether.   The rumors over the summer have crept upon us like tendrils of the warp spilling from the Eye of Terror.  Daemon primarchs, new Thousand Sons models and rules, a new Khárn the Betrayer model, a CSM supplement called Traitor’s Hate and much more.  While one should never put too much faith in these internet rumors, they do smack of the truth in the same way others have over the last year.  Certain rumored products just seemed to be proceeded by rumors that built slowly in the same manner.  Much like these rumors, they seemed wildly unlikely.  Silver Tower, the return of the genestealer cult in Deathwatch Overkill and the Deathwatch codex itself are just three examples.  These new Chaos related rumors just feel the same, and with the leaks of this last weekend, some are even confirmed.  Behold, Khárn the Betrayer ushers in the new CSM sourcebook Traitor’s Hate. 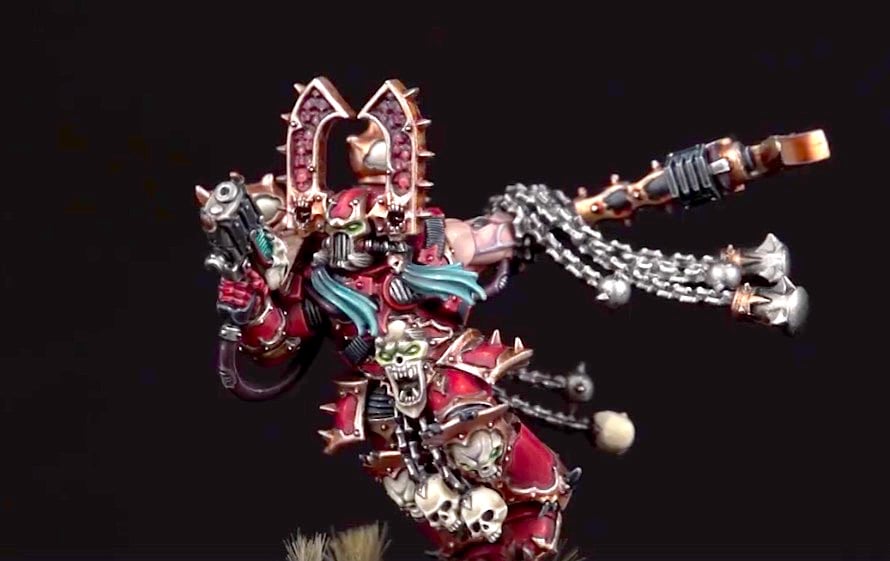 So what will Traitor’s Hate bring to CSM?  All we know for certain is that there will be four new Chaos inspired psychic disciplines, new Chaos formations, the rules for Renegade Knights and a new Black Crusade detachment.  From the sounds of things, it looks to be focused on the Black Legion and Crimson Slaughter, with a side of Khárn the Betrayer thrown in.  Pity, but it appears there will be no further Traitor Legion specific material or reworking of the Chaos God specific psychic disciplines.  Still, it looks to be a hefty book, and perhaps they’ll squeeze in new relics, warlord traits or Legion specific formations (multiples of these focused on the four Chaos Gods like the Daemons received in their update in Warzone Fenris: Curse of the Wulfen would be amazing).  I have hope that interesting and evocative things are coming our way.  Yes, yes, I recognize the futility of hope regarding CSM, but I soldier on.  At worst, there will be Chaos content that I can bend to my will and shape into fluffy improvements to my Legion centric CSM lists.  If we’re lucky, in this new era where GW seems to be getting many things right that they once got so wrong, maybe we devoted of the damned really might get something cool.  But either way, as additional rules, it can’t get any worse, right?

So now that I’ve firmly enticed you onto the path to damnation, why not give Chaos Space Marines a second look?  I mean, on the surface, they’ve got twice the cool of ordinary space marines and four times the tentacles.  Besides, call it intuition or just the imaginings of one who hears those voices in his head, but something tells me we are on the verge of a new awakening for Chaos.  There are stirrings in the dark, and the warp is watching…  Speaking of which, if you do find yourself embracing the glory that is Chaos, and furiously dive into making army lists, take a moment to peer closer at your own work.  If you somehow find that you have just penned a list that features Khárn the Betrayer teaming up with six motorcycle-riding sorcerers … you have lost your way.  Slowly place your pen onto the desk and back out of the room while softly chanting “Khorne cares not from whence the blood flows” to yourself eight times.

So how about it?  Do you hear the whispers in the dark?  Are you bitter enough to fight the Long War against the shiny followers of the false god that is the Emperor entombed upon a failing throne?  Hello?  Am I all alone in here?