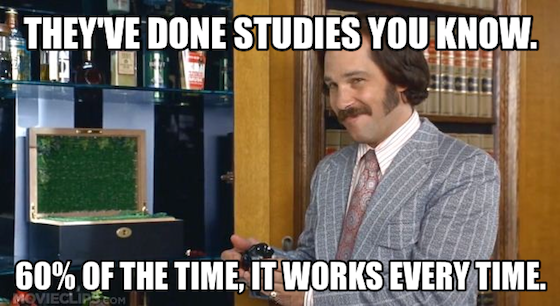 Goatboy here again and this week’s FAQ fully answered the question:  Is Kharn the Betrayer the ultimate bully?  YES!

Does he always give the roughest purple nurple?  Does he always get the Eggo during breakfast time?  The FAQ stated that Kharn will always hit on a 2+ – no matter what if they are invisible, WS 100, or making him fight with one hand tied behind his back.   This is pretty cool and fluffy as most people played it that way.  I have a lot of memories of Kharn popping out a Rhino, charging some Guardsmen, and doing 7 wounds amongst all the combatants.

The question I have today is – how the heck can we use Kharn to even do anything.  We all know if a Special Character isn’t attached to a thunder beast of some sort they most likely won’t get involved in the punch dancing we call the Assault Phase.  So how the heck do I get this murder beast into play?  I know overseas there has been a rather big usage of this jerk face in the KDK star lists we see and that is most likely the best way to engage the ultimate Skull Collector.

Let’s look at what Kharn adds to anything he is attached too.

– He hits everyone on a 2+ with a weapon that is AP 2, +1 Str, and even Armourbane.   Any 1’s hits his friends in the assault – but as he is most likely not instant death they can easily be “soaked” by a dog or two.  The Armourbane aspect is pretty interesting as it gives the KDK star an answer to a Knight that isn’t Psychic based. Oh is that an annoying Culexus hanging out – come meet Kharn and his 2+ hitting axe of jerkdom.  What is that D slinging Thirster thinking about doing?  How about eating some axe nonsense in his jingling bits.  It’s basically like Kharn took all the Tau marker lights from everywhere, shoved them in his helmet, and then said EFF YOU to invisible jerks.

– Hey if you are targeted by a Psychic effect you get to Deny the Witch on a 2+.  This is pretty neat as it helps you ignore the whole other issue with the list that is presented.  More on that later.

– He even has an invulnerable save which is good since Sanctuary can make him more of a pain in the butt to deal with.

– His Warlord Trait isn’t bad when you are looking at wanting Rerolls on a Death Star.  Hatred is pretty dang good.

Meh for the Meh God?

– He is on foot – which means your star will go -2 inches when charging through cover.  Luckily he has grenades so his Axe will always be going off at Initiative 5.

– He isn’t a Sorcerer so while he can kick butt he doesn’t give anything really extra unless you take him as your Warlord.

– He also has a Plasma Pistol which feels like it adds too much to his overall cost.  He is running a bit to high for a Special Character that isn’t fast moving, covered in fur, and hanging out with some poetry reading angel fans. 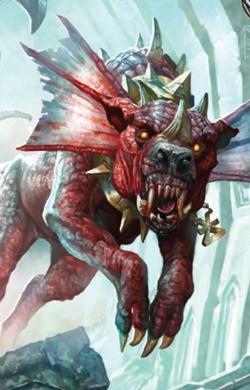 While there are some issues with the character I still think he can be a big help to the current KDK Dog star nonsense we see around and about.  This is the army for the person that doesn’t want to bring a ton of summoning daemons to an event and still wants to go out, kick some butt, and scream Blood for the Blood god.  I know there are Sorcerers in the list – but with the way Chaos Space Marines are working now they need some psychic help. 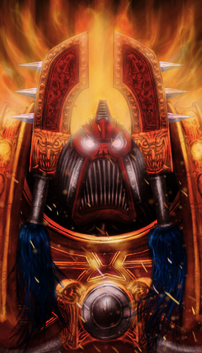 The idea here is to make either a 2 stars that can move around, support each other, and cause issues as needed.  One can get Kharn to get Hatred while the other can have Prescience cast upon them by the Sorcerer that is forced to “hang out” with the ultimate Jerk and keep him “occupied”.  I don’t know how well the list would perform but it seems like it might actually do enough work to get the job done.  It isn’t “scared” of Knights as it can easily have Str 8 attacks from massed Staves or from an enraged Kharn barreling in.

Spell Roll
Biomancy at min 2 Sorcerers.  Can do 3 if needed but most of the time you need 2 for each “star” to have a shot at Endurance.  Roll them on 2 Staff wielders as Iron Arm gives them AP 2 and sitting at Str 9 attacks.
Divination on the Crimson Slaughter Sorcerer – this is a lock and most likely what you roll first.
Sanctic rolls on at most 2 of them depending on if you want to split up into different stars.  Sanctuary, Hammerhand, Gate, and even Vortex of Doom are all strong spells. Cleansing Flame can be really handy especially with a Divination throwing Sorcerer.  I personally know how good Misfortune can be.
Telepathy is what you might want on 2 Casters depending on what they roll first.  2 hits of Psychic Shriek will be helpful as well as any Shrouding or Invisibility.

I went with Laser Destroyers as you have an option to hurt things like Rhinos and other pain in the but boxes.  Plus you can get lucky and pop/hurt a Knight from across the field if needed.  I think these models are also one of the few “good” things Chaos Space Marines can get.  I had a thought on using some extra Lascannons from left over Centurion builds mixed with Ad Mech tank legs.  Plus Green Stuff and a little bit of Goatboy Elbow grease.  I am annoyed that the only way Chaos seems to work well is either utilizing some kind of FW nonsense or shoving a ton of Psykers into a unit or two.  I am hoping the rumored “update” makes them good so I can feel like actually playing Chaos instead of just trying to out spell sling my enemies.