Privateer Press is Planning a Big Showing at GenCon 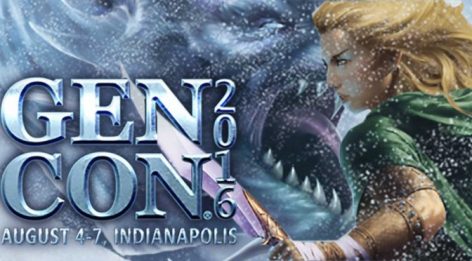 Privateer is bringing some sweet exclusives to GenCon – take a look!

Privateer’s marketing manager, JR Godwin, spills the beans about all the great things they have in store for GenCon…

I love this time of year. We are in the middle of convention season, and there is always something going on. So far this year we have been to SmogCon, Lock & Load GameFest, Origins, the Las Vegas Open, and a whole bunch of other shows, and that’s only the beginning of what we have planned. Our next big appearance is at Gen Con. This year’s show is going to be bigger than ever as we celebrate the new editions of WARMACHINE and HORDES with a host of events, con exclusives, and new features at our booth.

For the casual gamer, we have plenty of tables prepped and ready for war in our Iron Arena. Iron Arena lets everyone get in on the action, earning skulls for each game played (which can be redeemed for sweet prizes, from special Iron Arena tokens and dice to collector’s editions of Prime and Primal). Iron Arena is being done a bit differently this year, with tickets being used to secure two-hour time slots. This lets you play when you want and still have time to check out the rest of the show. Make sure to try out our brand-new Rumble format on 30˝ x 30˝ mats. Same great WARMACHINE taste, but twice as fast! Looking to see some of the fiercest competition around? Head over to the Iron Gauntlet tables where top players from across the globe compete to gain the coveted title of Iron Gauntlet champion, with this year’s being especially important as it marks the first champion of the new editions! Over in the Masters tournament, you will get the chance to watch tactical experts display their skills with gorgeous armies. Our newest format, Champions, will be making its debut as well. Drawing from a restricted pool of warcasters and warlocks, Champions lets you prove you have the mettle (and metal) to bring the fight no matter the limitations.

If you joined us last year you got to see the prototype for our line system, and this year we have further refined it. We will be using the fast passes again—here’s how they work. When the line gets full, we will hand out passes with a specific time on them. Once you have your pass, you can go and check out all the show has to offer (like Iron Arena or one of our board game or IKRPG sessions in the events hall), and come back to the booth at the time on your pass. That way you get to see the show without spending most of it standing in line.

Our booth is packed with new models and sweet exclusives. First up are the five newest members of our elite warcaster club, the second versions of our novice warcasters. Each brand-new model is being previewed (so far Sovereign Tristan Durant, Captain Aiakos, and Captain Allison Jakes have made an appearance), so you will get a chance to check out how they went from a concept sketch up to a miniature. Debuting at Gen Con (and on our online store), these limited-edition sets feature a unique box, boast a foil card, and have an exclusive pin so you can show off your faction loyalty with pride.

The box is designed to fit in your battlegroup box and has plenty of room to store sleeved cards, so your miniatures, cards, dice, and tokens all have a solid carrying case to get them safely to the field of battle. Back in 2007, we partnered with the RAM (more on them in a minute) to put out Bloody Buccaneer Brews and shirts. Now the Pirate Queen gets to join the ranks of our beer-based crew. The Bloody Buccaneer herself, Pirate Queen Skarre will be on sale both in our booth, and for those not attending the convention, on our online store. The model is gorgeous; Doug Hamilton knocked it out of the park! Tales of the Invisible Hand will be launching at Gen Con, and on Friday and Saturday from 2–4, Miles Holmes will be at the booth to sign copies. This marks the first book for Skull Island eXpeditions to be set outside the Iron Kingdoms or LEVEL 7 universes, and is a harrowing tale of adventure set in a steampunk world. If that isn’t enough to grab you, how about we add the first chapter of the upcoming Mark of Caine novel as a bonus? Over on the P3 side of the booth, Dallas Kemp, studio painter extraordinaire, will be on hand showing off painting techniques and chatting with passersby. Make sure to swing by and chat with Studio Director Ron Kruzie and Sculpting Engineer Stu Spengler about your P3 Grandmaster entry or just to pick up a few hobby tips and tricks. Speaking of, the P3 Grandmaster Painting Competition features entries from top painters across the world. Last year saw Tom Ales take the top prize, with his Ashlynn D’Elyse. I love seeing the models for this come in. Showcasing beautiful paint schemes and creative conversions, the P3 Grandmaster Painting Competition is always one of my highlights of the show. For those of you who are new to Privateer Press, or are bringing new members to the family, we will have demo tables showcasing the new editions of WARMACHINE and HORDES. We are also trying out something new this year. I can’t say too much about it just yet, but I will say it does involve putting Will “Oz” Schoonover, Will Shick, Will Hungerford, and Matt “Will” Goetz on small stages and giving them microphones . . .

As referenced above, we are back at the RAM in full force this year. The RAM always puts out a fantastic menu, and this year sees the return of the Bloody Buccaneer brew. Stop by for a bowl of Borka’s Home Remedy or snag a Sea King Sandwich. The whole restaurant gets a facelift with dozens of banners featuring the art of WARMACHINE and HORDES, and it has Bloody Buccaneer shirts and swag available for sale.

There is a ton going on this year at Gen Con. Pin trading, high-level competition, author signings, and new editions everywhere you look mark this year as an all-new war. It will be an amazing show, and I look forward to seeing you all there. Make sure to keep your eyes peeled for upcoming Insiders, Primecasts, and newsletters, as I will be highlighting all of our shows to come (Wargames Con, PAX Prime, WARMACHINE Weekend, SmogCon, and more).

Are you going to be wandering the halls at GenCon tomorrow?