Privateer: Q&A with Will Shick

Will addresses your Warmachine/Hordes questions in last installment in Privateer’s Q&A series before the holidays!

Without further ado, a few of the questions covered:

Will the Mercenary, Minion, and Convergence theme forces to be released in No Quarter also contain new models? If so, can we expect those models to follow the same “models will release within three months” guideline?

Those theme forces do not necessarily introduce new models to their Factions. If an issue of NQ does introduce a theme force containing new models, however, then those would follow the same “release within three months” guideline.

Do you acknowledge there is currently a gap between WARMACHINE and HORDES system balance?

No. Are there perhaps match-ups where WARMACHINE has a leg up on HORDES? Very likely. Are there other matches where HORDES has an advantage over WARMACHINE? Also very likely. Does this prove that one game is simply the superior game and that it will always come out on top between equally skilled opponents? I don’t think there is nearly enough data to prove such a point. WARMACHINE certainly received a power up (pun intended) in the new edition. That was one of our big goals. In doing so this certainly swung the pendulum from the fury to the focus mechanic in terms of basic power level. Did it swing it too much? That certainly has been a subject of much debate, and this is an issue we will continue to watch. My current thought on the matter is that the Focus system now is much more forgiving, but just because it allows a player to recover more easily from a streak of bad luck or a misplay doesn’t mean it is the more powerful of the systems. We’ve definitely seen high-level players do well with HORDES against equally matched WARMACHINE players. In the end I don’t think anyone can unequivocally claim that WARMACHINE > HORDES when taking into account all variables, but we have indeed seen a shift in the focus vs. fury power level between the two systems. 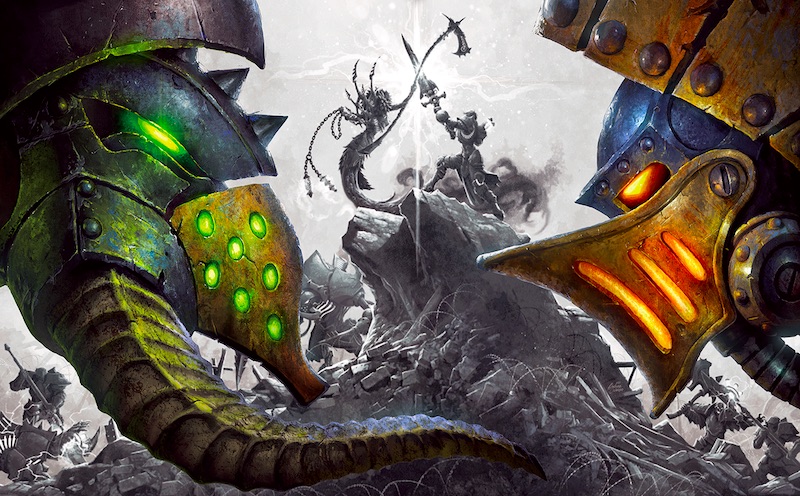 What is the intention, moving forward, to deal with spam lists?

This question assumes that spam lists by definition are a problem or unintended. The fact is that they are part of the nature of the game at the moment. Whether or not someone dislikes seeing multiples of the same model fielded across the table has no bearing on game balance foundationally.

Now, that being said, we will be watching such trends closely and, as always, doing our best to discover possible areas where a model (whether due to its abilities, stats, points, or interactions) is over-performing and thus leading to a situation where it becomes the best option, period. In fact, I just watched a playtest game yesterday where our developer Will Pagani brought Xerxis 2 and 26 Reptile Hounds to stress-test some of the changes we’ve made to both models.

Of course, sometimes items will be missed. We’re not perfect, which is why we will continue to expand our playtesting resources over the coming months (because more testing is always good), and we will remain vigilant and committed to addressing elements that are detrimental to the health of the game—but that doesn’t mean eliminating “spam.” After all, if someone wants to build an all-Feral Warpwolf army, why shouldn’t they be able to do so?

Can the majority of Factions expect changes to their top/bottom performers?

Sort of. It’s not a karmic scale. Every Faction should expect a small number of changes to a small number of models. Since generalities only seem to lead to consternation, at the time of this writing the most changes outside of Skorne were to Cryx, at 9, and the least to Protectorate at 1.