Popular Mechanics: What Is LOL Teh Randum? 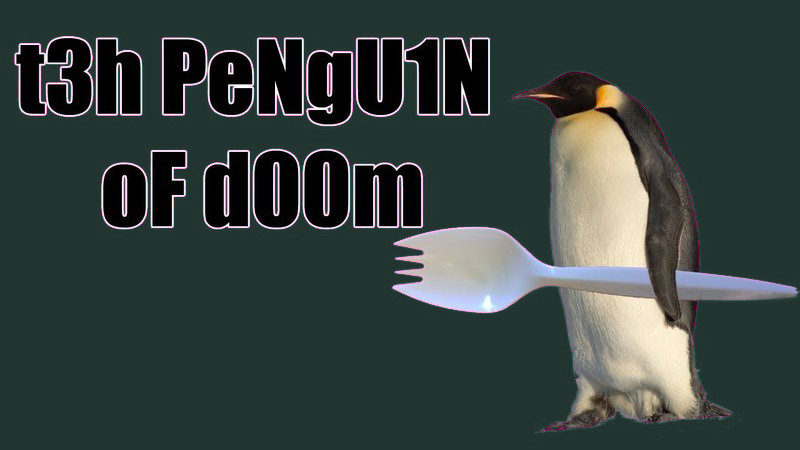 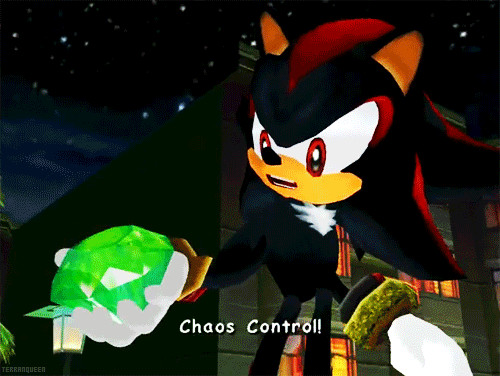 Randomness is meant to be a leveler; gives bad players an edge and brings skilled players down. The problems with chaos is that it’s hard to control.

Hello, friends! Today we begin a new chapter in Popular Mechanics.  We will be discussing Randomness. As before, in Part 1 we will discuss the mechanic at it’s core and argue the pros and cons of it in games. Lots of games have elements where the outcome is largely unaffected by the decisions of the players and is left up to the most random effects we can reliably create. There are plenty of discussions to be had on how random something can be, but we will not be touching on that here today. For the sake of this article, we will be defining a mechanic to be random if the outcome is unknown to all players.

If you’ve missed the previous chapter of Popular Mechanics on Betrayal, click here for Part 1: Breakdown of Betrayal, Part 2: Betraying Your Game and Part 3: How I Would Betray You.

I dove into my research for this article thinking there were going to be dozens of different types of random effects in games. But as I delved deeper, I realized that is not really the case. At their core, random effects boil into two categories: Drawing and Rolling.

Rolling is probably the most common addition of randomness in games. When rolling, the players are all aware of the possible outcomes, they simply don’t know which is going to occur. The results of the die don’t affect future rolls. You can roll a die and roll the same result over and over. This is not possible with Drawing unless the card is specifically shuffled back in everytime. A game mechanic which has cards drawn and shuffled back in everytime might as well be done with Rolling a die. Also, this definition of Rolling would also encompass spinners. At their core, there is no real difference between a die and a spinner. 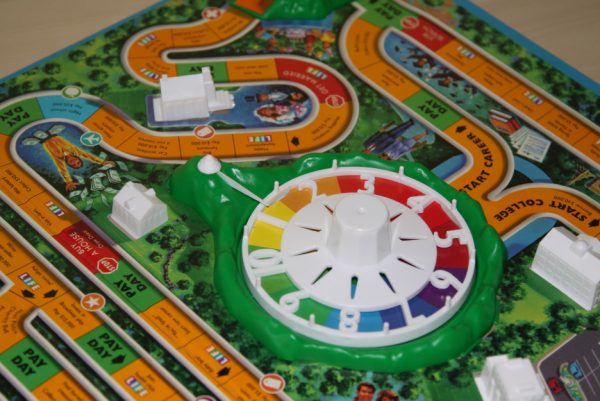 Can’t fool me, you dice wannabe!

Drawing is much more vague because it has so many more possibilities. With Drawing, the players don’t necessary know what the possibilities of the draw are. Many story-driven legacy games specifically request the players do not look at the cards of a specific deck before playing. Drawing can result in previously unknown information, Rolling can’t. Drawing gives the option of altering the possible results. The top card of a deck can be peeked at, which will provide a player with ‘future’ information. A deck of cards can be shuffled. You can add tokens to a cup or remove others. With each card drawn, the odds of drawing the other cards increases. All of these things are specific to Drawing and can not be done with Rolling.

Lots of games like having the random element but try to control the randomness a little bit.  There are a variety of ways this can be done.  Rerolls are one of the easiest and most effective methods of attempting to sway randomness.

If you are trying to find the chances of A AND B occurring, you multiply their chances together. So the chances of getting a success on the reroll is 2/3 * 1/3 = 2/9 = 22.2% But that’s lower than my initial chance of success? What gives? Remember that this 22% is getting the success specifically on the reroll. We still have the chance to get a success on the initial roll, which was 33%. So what needs to happen to get a success at any point?
1. Roll a 5 or 6 in the initial roll (1/3 chance)
OR
2. Get a 5 or 6 on the reroll. (2/9 chance)

So by adding a reroll, we’ve increased our chances of success from 33% to 55%. The amount of additional chance of success changes based on the result you are aiming for. Below is a little table outlining the chances of success for each die result on the initial roll, with a reroll and the percentage chance gained through the reroll.

I might have gone a little overboard on the math stuff here but I did it to emphasize a point. A single reroll increases the odds of success by around 20%. That’s definitely significant.  On top of that, from a game design standpoint, rerolls can offer a sense of drama and tension. Rerolls are often limited in scope or number so when they are used, they are used with importance.  When you need that one last hit on Cthulhu or need to find just the right piece of equipment before the zombies overrun the grocery store. It creates a moment of excitement while the players watch the die tumble and roll, on the edge of their seats waiting for it to determine the outcome of the entire game! But is that such a good thing?

Randomness Can Be Frustrating

We’ve all been there. Everything comes down to this one die roll. Everything hinging on this one little cube landing just right for everything you planned to come to fruition.  Otherwise, it was all for naught. Is that a good game mechanic? Should a game hinge so greatly on any random effect? The answer is most likely that it comes down to the player and the game. Some people will love that suspense and tension that randomness can bring to a game. Other players will find it demoralizing to know there is nothing they could have done for secure victory if it ultimately boils down to a die roll. On top of that, some games lend themselves better to that randomness while others are designed to shy away from it. Any strategic, tactical game usually tries to avoid it, but it is very difficult to completely remove randomness from a game and still have it remain popular. 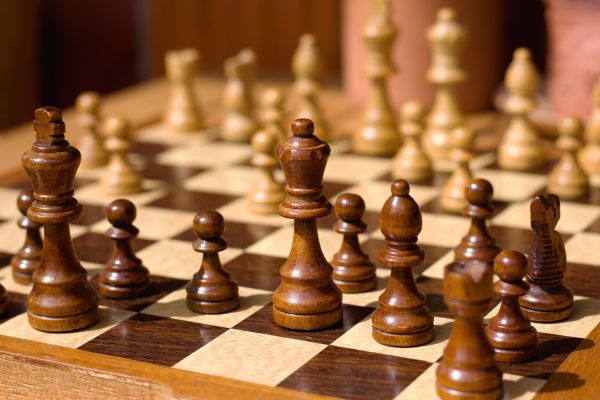 If you watch our Twitch channel regularly, you’ll know dice and me don’t get along very well. Very often, I roll extremely poorly and it affects the outcome of the game in a way I have no control over. Unfortunately for me, because I’ve never heard of confirmation bias, this happens to me all the time. Players don’t like feeling out of control. They want to know that if they play well and make good decisions that will increases their chances of victory. Conversely, if your opponent just keeps drawing just the right card each time, that can also be frustrating. 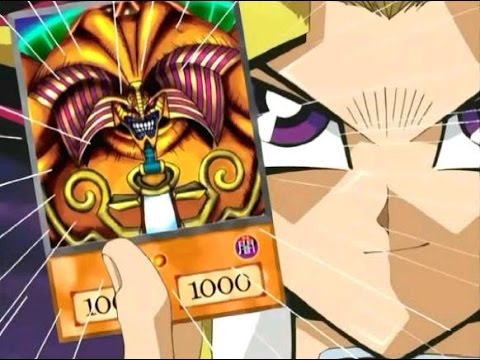 From a game design standpoint the differences between Rolling and Drawing come down to logistics of what the designers want to be random but also how they want the players to interact with that randomness.  Rolling feels more under the player control. When a player rolls poorly, they often will blame themselves.  But why is it that players will often blame themselves for poor die rolls but blame the deck for poor draws? The players rolled the dice just as much as they shuffled the decks. Both are under the player’s control, inasmuch as the chaos of the universe allows. When dealing with something like randomness it is important for a designer to consider how the players will view these random events. It’s okay for something to be a hurdle to be overcome, but as soon as it hits that “Oh, come ON!” point, you’ve crossed a bad line.

If a game is trying to appeal to a wide audience, they will usually have some random mechanics in them. This is mostly to increase replayability and even the playing field among the players. Games with randomness in them can be played over and over because each game will inherently be different each time, even if the players attempt the same strategies. In games with zero randomness, the differences in each game are based solely on the players. Also games with zero randomness can often be “solved“, making for an unbeatable player.

Additionally, random events in games can help out players doing poorly and bring winning players down a peg. An event card or a bountiful resource roll can swing the game in either player’s favor. Knowing a random plague might wipe out the winning players crops is a great way for losing players to hold onto that hope of winning. A game with randomness is going to have that ’emotional roller coaster’ effect that random-free games just can’t manage. Players want to feel those highs and lows throughout the game. For better or worse, randomness makes a game exciting. 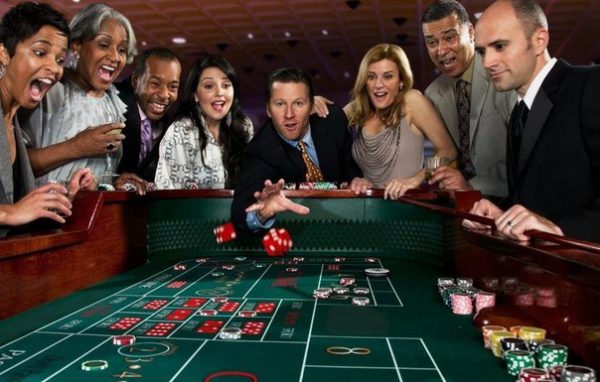 At least most of them look like they’re excited

We’ve discussed how games can add randomness, how the players can manipulate that randomness and how all that ultimately affects the game. At the end of the day, there is no right or wrong for how games deal with randomness.  Each game is different and wants to bring a different gaming environment to its players. Some games love the random hodgepodge of chaos while other games want nothing to do with it. It’s not a discussion over whether or not randomness is good in games. It’s a discussion of how randomness can and should be used in games.

Next time in Popular Mechanics: Randomness we will discuss several games which use randomness in some capacity and how they do it well or poorly.

~How much randomness do you like in your games? How much is too much or too little?

Author: Matt Sall
Matt has loved games of all kinds his whole life: board, video, war, roleplaying. He's worked as a writer for BoLS since 2017. He's worked as freelance editor for board game rulebooks and has designed many of his own games as well.
Advertisement
Board Games Card Games Editorials Game Design
Advertisement