Chapter Approved is coming this weekend and with it are some new Matched Play rules – come check them out!

We’ve been chewing through the new Chapter Approved 2017 this week. Goatboy had some of his initial thoughts. We loved the new Apocalypse stuff. And we’ve got our picks for the best Stratagems in the book as well. Yesterday, we took a swing at our favorite Warlord Traits from the book. We even gave the Relics a turn under the spotlight. But today we are looking at what many folks were hoping would be something far greater – The changes to the Matched Play rules.

Other than the points changes, the changes to the Matched Play rules were perhaps the most anticipated changes coming for 40k 8th edition. Folks had some pretty high hopes about big, sweeping changes – or even slight changes to the character rules – but that didn’t happen. As Goatboy covered Monday, the changes were honestly pretty minimal. So brace yourself! 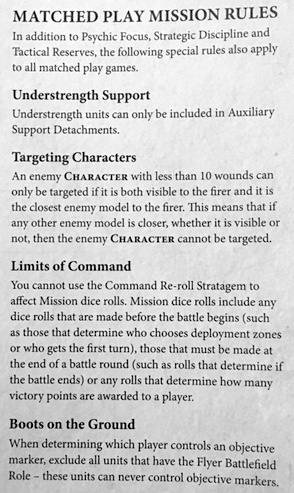 Let’s break these down one by one:

Understrength Support is actually an interesting change. If you take an understrength unit, it HAS TO be included in Auxiliary Support Detachments. What’s the impact? Well Auxiliary Support Detachments are -1 CP if you include them. So players will need to weigh the value of that random “8-out-of-10 man Squad” they want to include vs a Command Point. This would also cut down on including undersized units in other detachments just to 1) points fill and 2) gain access to bonus Command Points.

Targeting Characters basically makes character harder to target. Again, Goatboy covered this in more detail so we won’t retread that.

Limits of Command cuts down on Command Re-roll shenanigans before the game starts. No more using them on Mission dice rolls such as deployments or first turn rolls. It also limits using them to determine if the game will continue or end. And finally, you can’t use them on rolls that determine victory points. Overall, this just feels like a good change to clarify when you can use the Command Re-rolls.

Boots on the Ground is basically the same as the FAQ/Errata rule – it’s just in print officially…again, for the first time…

Now, the Chapter Approved does have 12 new missions for Matched play use. So if you want to count those as “rules changes” well, that’s up to you. Chapter Approved hit shelves this weekend so be sure to stop by your FLGS or your local GW store to check out all it has between the covers!

There looks to be change on the horizon…