You’ll battle, build, scheme, overthrow, usurp, connive, rally, inspire, overwork and a dozen other things all in a single game of Root.

Don’t worry, everyone. Gloomhaven is slowly creeping back into its rightful place in the Top 3. We have a handful of titles from last week sticking around still: KeyForge, Root, Everdell and one of the Brass titles. Since KeyForge is getting lots of coverage already (rightfully so, that game look rad as heck) let’s focus on this week’s top game, Root, which has uprooted itself from 4th place last week. 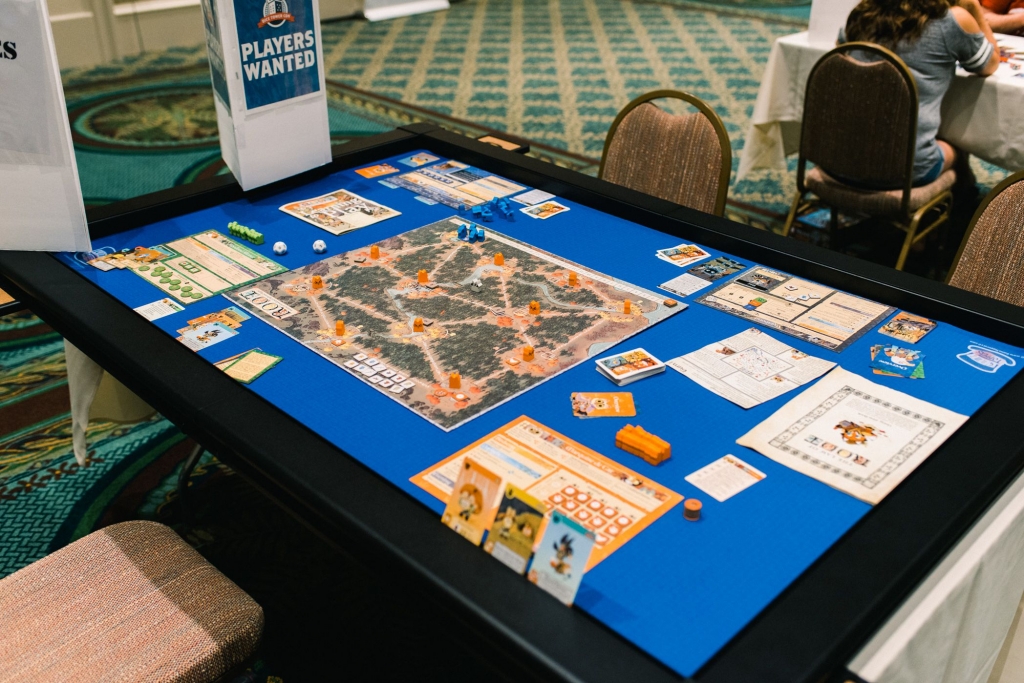 In Root, each player takes the role of a different faction. What makes Root so great and unique is immediately obvious once someone starts explaining the rules. Each faction plays completely differently. They have different goals, objectives, turn structure, resources, items, battle abilities… everything.  Plus, they all are just so darn cute. 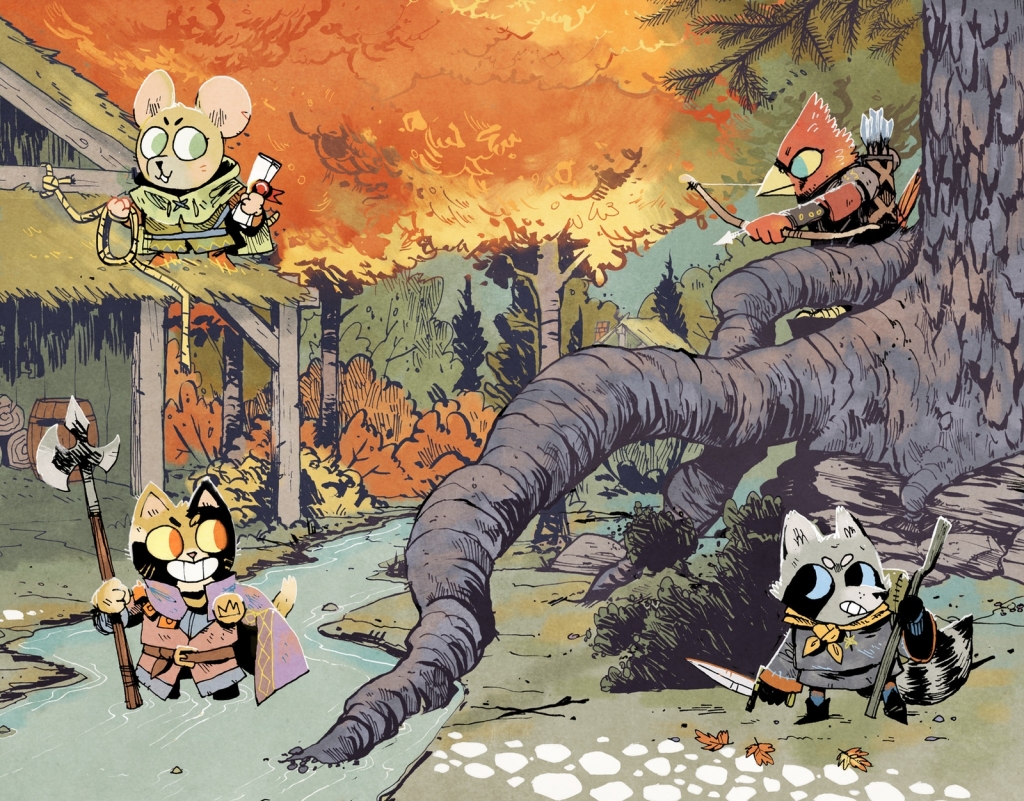 So, rather than go over how the game works in a grant sense, we’ll do a quick overview of each faction.

The Marquise de Cat is the governmental body of the woodlands. They want to harvest the wood from the trees to build further workshops, sawmills and recruitment camps while using those resources to craft valuable tools to fend off the pesky Woodland Alliance or troublesome Eyrie Dynasty. 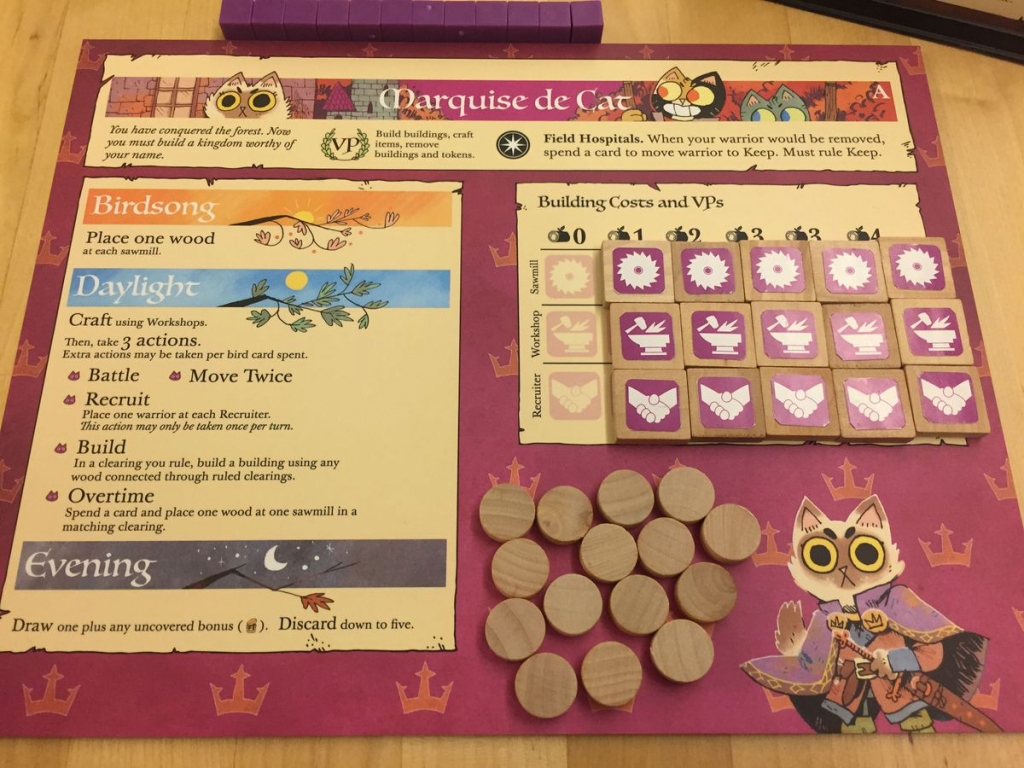 On their turn, the Marquise gathers wood resources from any mills they have constructed, then can use that wood to build more buildings around the forest, gaining points for each one. Additionally, they can use that wood to activate the cards in their hand or craft new tools to use.

The Eyrie Dynasty are stalwart in the defense of their lands. The Marquise has pushed them back to only a single roost, but they have enough force to push back against them and take back their lands. But the turmoil within the faction causes unrest and leaders cycle as often as the sun. 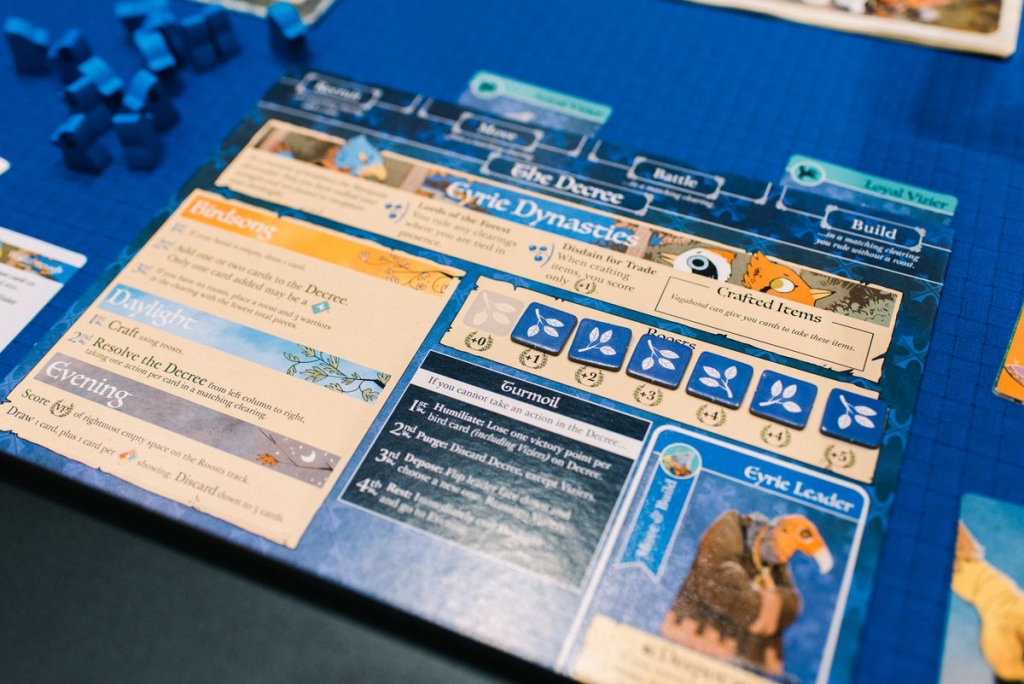 The Eyrie’s objective is to gain as much territory as possible. On their turn, they use something of a programmed turn mechanic to do as many actions as they can. However, if any of those actions fails, the faction goes into unrest, costing them points and forcing a new leader card to take the place of the old one. Each of these leaders has a different abilities and bonuses. So, unrest at the wrong time can cause big trouble.

The Woodland Alliance are the voice of the people. They lurk in the shadows, gaining sympathy and hatching plots to overthrow both the Marquise and Eyrie and return the land to the people. 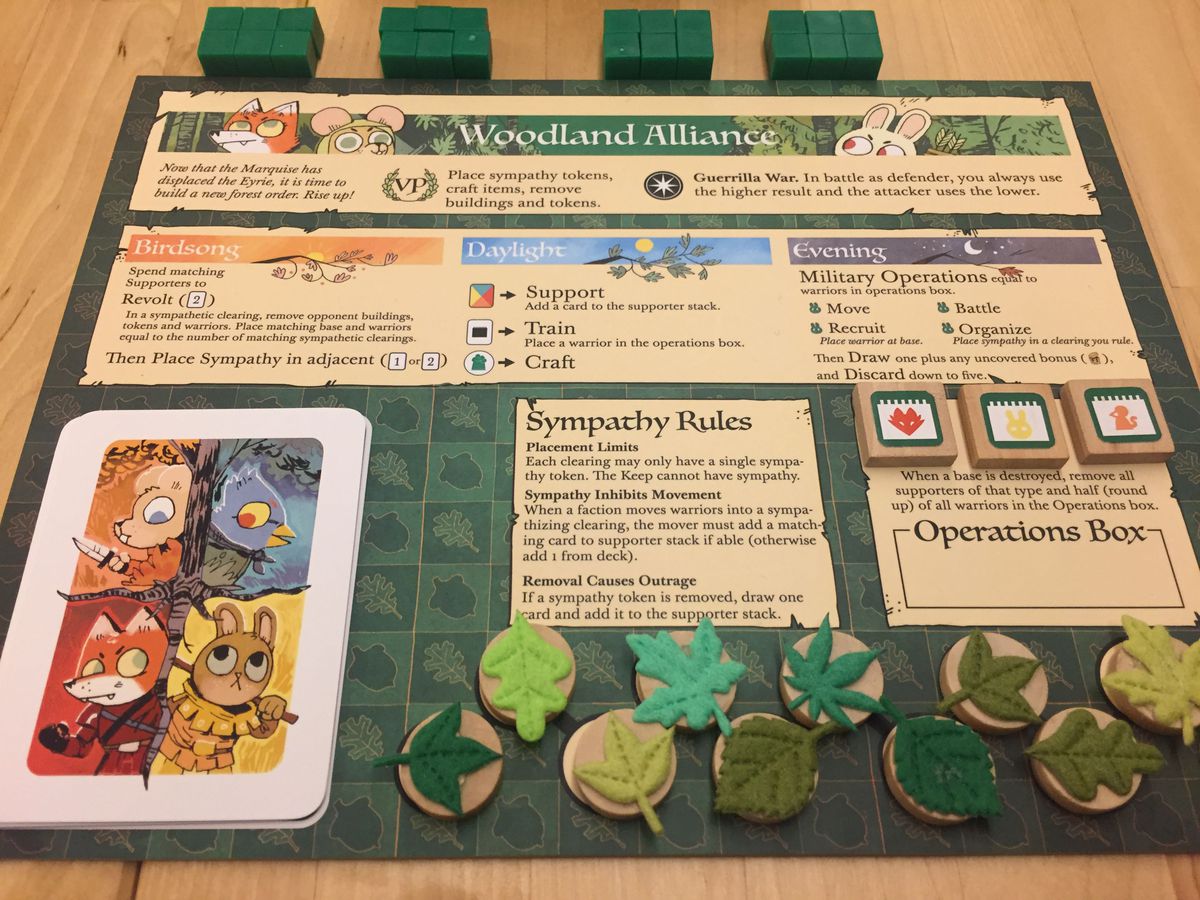 The Woodland Alliance gains Sympathy tokens on their turns, which they can place in the various locations around the board. As sympathy grows, so does the Alliance strength and more rally to their side, giving them the forces they need to repel the armies from all sides. Once they have enough sympathy, they have enough force to overthrow both governing bodies and bring peace to the land.

The Vagabond is not a faction nor army, but a single individual. They play all sides against each other and use the conflict to their own advantage. Their allegiance to any one faction is as fleeting as their feet. They remain hidden in the woods themselves, coming out only when the time is right. 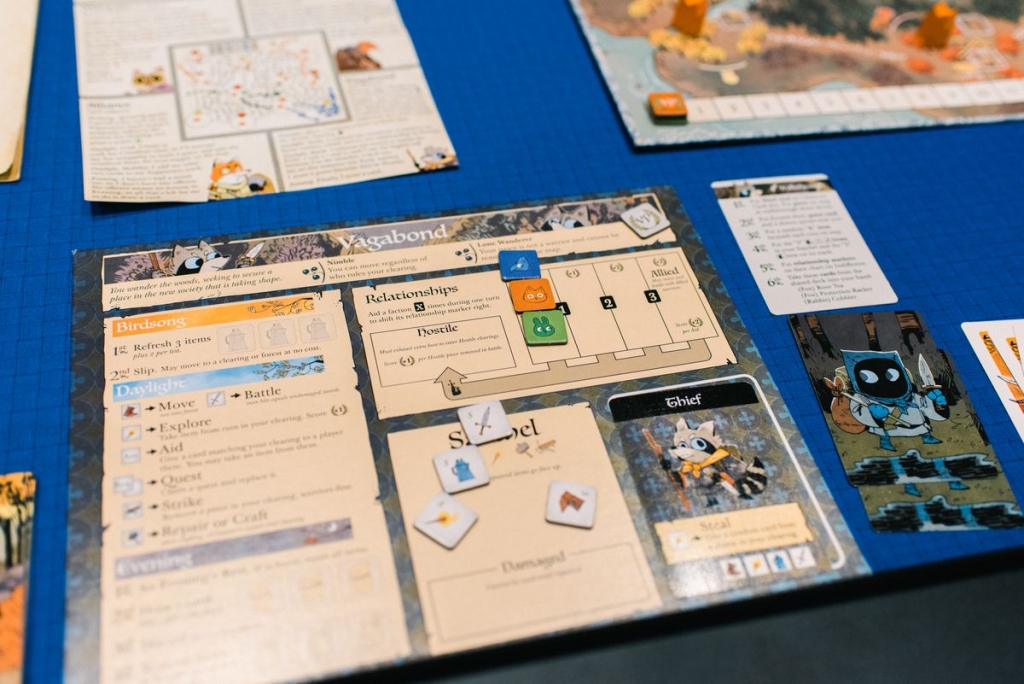 The Vagabond plays more like an adventurer; picking their battles and gaining loot and items along the way. These items help the Vagabond in all manner of ways, but they are fragile and can break and will need to be repaired. They gain alliance points with each of the factions until they fully ally themselves with a single faction. If that factions wins, so does the Vagabond.

Root is an absolutely fantastic game in gameplay, theme, style, art, just about everything. I love asymmetrical gameplay so this is right up my alley. If you’re at all interested in the game, there is a Print and Play version you can look at too, but I highly recommend getting a published copy. Supporting this developer is a good deed and the quality will be much better. 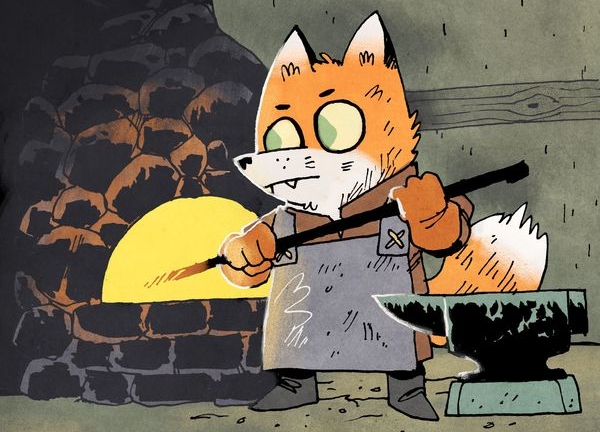 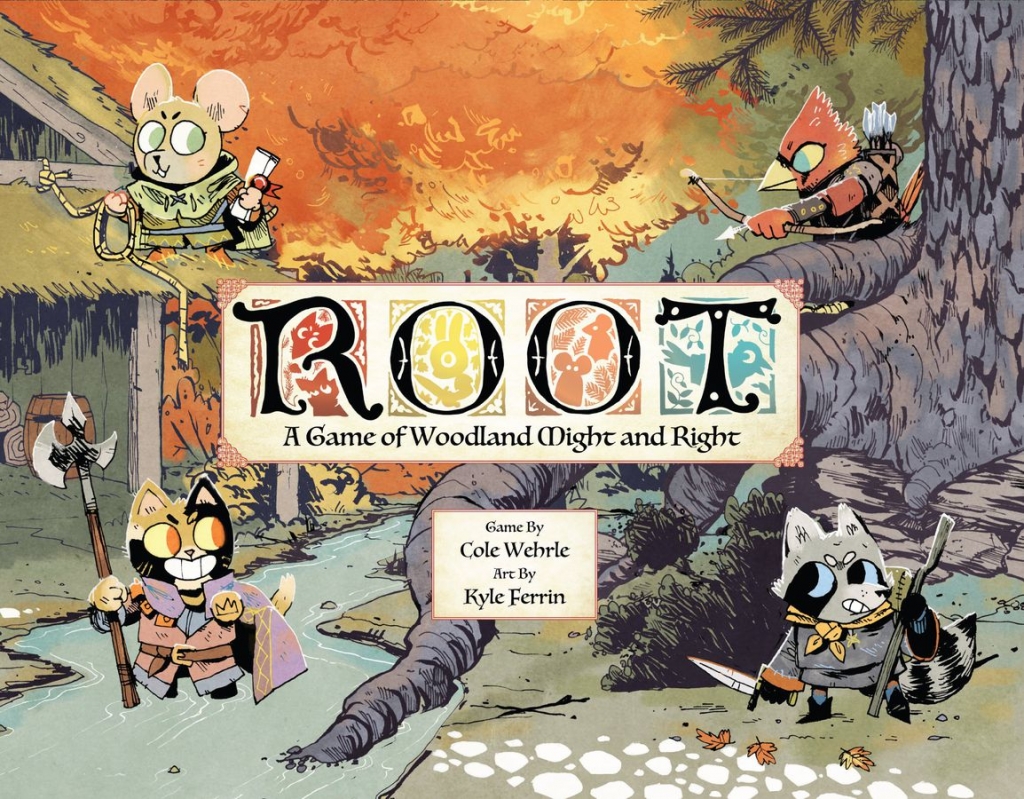 The nefarious Marquise de Cat has seized the great woodland, intent on harvesting its riches.

Under her rule, the many creatures of the forest have banded together. This Alliance will seek to strengthen its resources and subvert the rule of Cats. In this effort, the Alliance may enlist the help of the wandering Vagabonds who are able to move through the more dangerous woodland paths. Though some may sympathize with the Alliance’s hopes and dreams, these wanderers are old enough to remember the great birds of prey who once controlled the woods.

Meanwhile, at the edge of the region, the proud, squabbling Eyrie have found a new commander who they hope will lead their faction to resume their ancient birthright.

The stage is set for a contest that will decide the fate of the great woodland. It is up to the players to decide which group will ultimately take root.