Happy FAQ Day Y’all! Let’s take a look at how this is going to change the meta.

Well, friends, the promised day has arrived (not that one). The next BIG FAQ is upon us – or I guess its the April 2019 Update, as they are now calling it. Whatever it’s called, this is a significant update to both the core rules and rules for many armies. Combined with the new rules for Ynnari and Slaneesh, it’s possible this could be a big shakeup for the meta. There is a lot of stuff in this update, with the main document and updates for pretty much every other FAQ. A lot of it is very good (the best part is the designer commentary which shows why they made certain changes and is greatly appreciated), while some seem out of left field. Today I’m not going to talk about every detail; rather I want to focus on a few changes and how it could shake up the meta.

This has not been a good weekend for Aeldari players out there. They’ve been one of the most dominant forces in the meta since the start of 8th, using powerful Ynnari combos to rack up victories and only picked up more steam with Craftworld and Drukhari books. While the last few months have seen them win less major events, they took top place in most of the big tournaments for nearly a year. That reign seems to be over now. 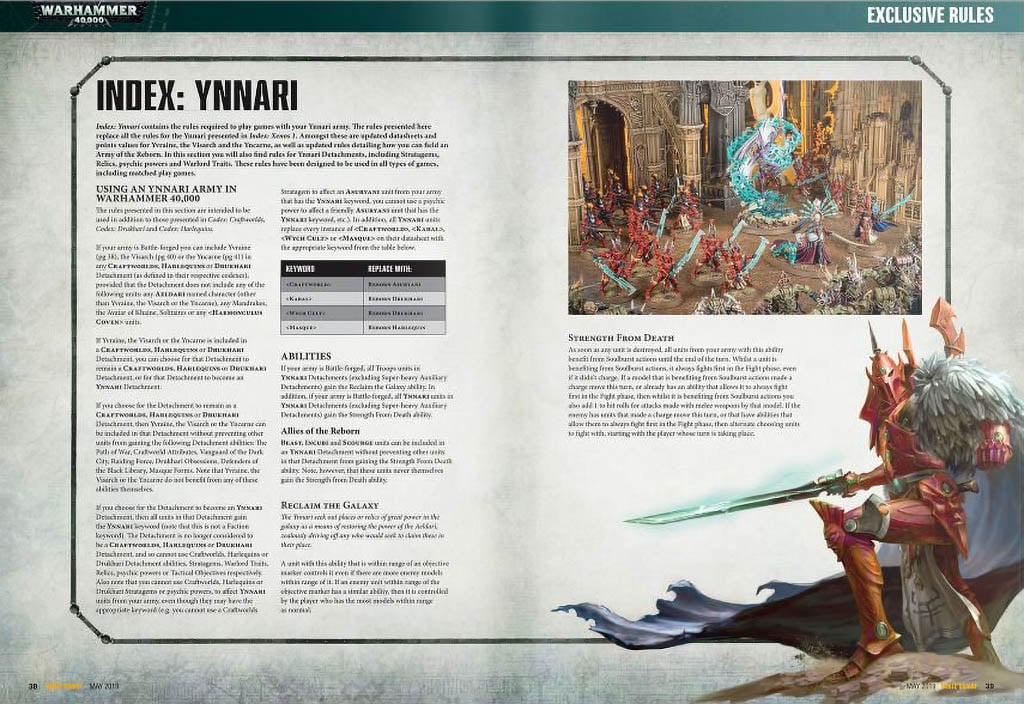 This weekend we got a look at the leaked White Dwarf update for the Ynnari. While the update may be better for the game as a whole, and gives the Ynnari a flavor of their own beyond a handful for rules, it is a pretty huge nerf to their power level. In particular, it gets rid of their ability to act twice and curbs the ability of different Aeldari soup factions to affect other parts of the soup. This alone would radically shift how Aeldari soup armies work and hurt their power level a lot.

The Fall Of The Aeldari 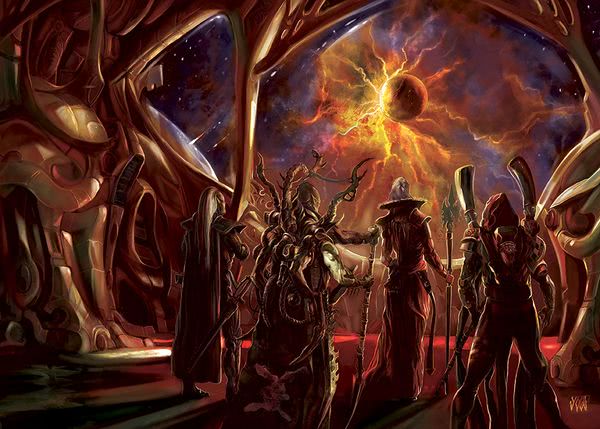 However, Ynnari weren’t the only thing to hurt to Aeldari, a couple of critical rulings in the FAQ have also struck blows against the pointed eared overlords. The first significant change is to make the psychic powers Doom, Jinx and Reveal only benefit Asuryani units. Also based on the Ynnari rules it also seems like these abilities won’t effect Asuryani units in Ynnari detachments. This is a significant blow to Aeldari soup lists as it was widespread to see Craftworld pyskers casting these powers on enemy targets and then powerful Drukhari units, often flyers or Ravagers, take advantage of the powers. This is another ruling that hurts Aeldari soup a lot.

The other change to the rules that hurts Aeldari are the new Aircraft rules. In effect this lets players move models over the bases of flyers, making it harder for them to block movement and funnel enemies. While this isn’t directly aimed at Aeldari lists, it is looking hard at lists that have been running flyer spam – with 4-6 flyers showing up in many lists. Anything that hurts flyers, however minor, is going to hurt them. So with all this said it’s clear that Aeldari, and especially the powerful Aeldari soup lists we’ve been seeing, have taken a significant blow in several areas… and it’s going to hurt them. 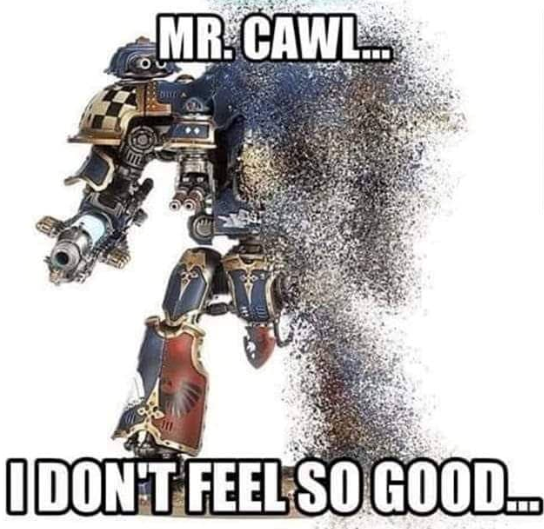 The other big nerf to a top tier meta army is aimed at Knights, and the Castellan based soup lists we’ve seen dominating the meta the past few months. There are two main changes made in the FAQ. The first is a simple points increase of 100 points (110 for the Chaos version, but that ends up keeping it the same price as the Imperial). This is something like a 16% points increase and brings them up to just over 700 pts. This change is coupled with a ruling that the Rotate Ion shield stratagem can’t make you save better than a 4+.

So this is, without question, a nerf. Knights are objectively worse than they were before. However, I’m not sure it’s enough to take them down a whole ton. An extra 100 points for a Castellan still means its one of the best units in the game and throws out a ton of shots. In the current meta winning AM/Castellan soup list all this change does is cost you a couple of Infantry squads and an upgrade. Take a look at the LVO winning list for year; the only thing that would change is maybe two fewer infantry squads and swapping a Hellhound for another squad of Rough Riders, or maybe turning a Wyvern into a heavy weapon team. It’s not a huge change. Honestly, losing the save is a larger issue, but I’m not sure it’s enough to dethrone knights.

So what does all this mean for the meta overall? Well, right now we’ve had two real lists fighting for the top, Imperial soup (mostly Castellan based) and Aeldari soup. Chaos soup has struggled but has been able to breach into the top tires sometimes. The FAQ is going to hurt two top armies – Knight soup got worse, but I don’t think all that much worse. And the good news for Imperial Soup players is that their main rival, Aeldari Soup and Ynnari lists got a huge nerf. Knights might have gotten a slightly worse save, but they don’t have to worry about double shooting Dark Reapers or Dark Eldar flyers and Doom.

So I think Knights will stay on top, given that there was no other attempt to address Imperial Soup or soup at all. Aeldari are in trouble and might fall back into the pack a bit more. Chaos on the other hand might have a real chance. They’ve got a new Codex, new buffs in Vigilus and are getting some rad new demons. They’ve come out of the FAQ pretty much untouched (sadly Cypher lost the ability to call in Assassin to a Chaos army, that I talked about here)  and I think they are set to jump ahead of Aeldari, meaning it’s looking like 2019 could be all about Chaos vs. Imperials, sorry Xenos, maybe next year.

Let us know what you think about the FAQ and what it means for the Meta, down in the comments!

40K Tough Love: The Ynnari Had it Coming