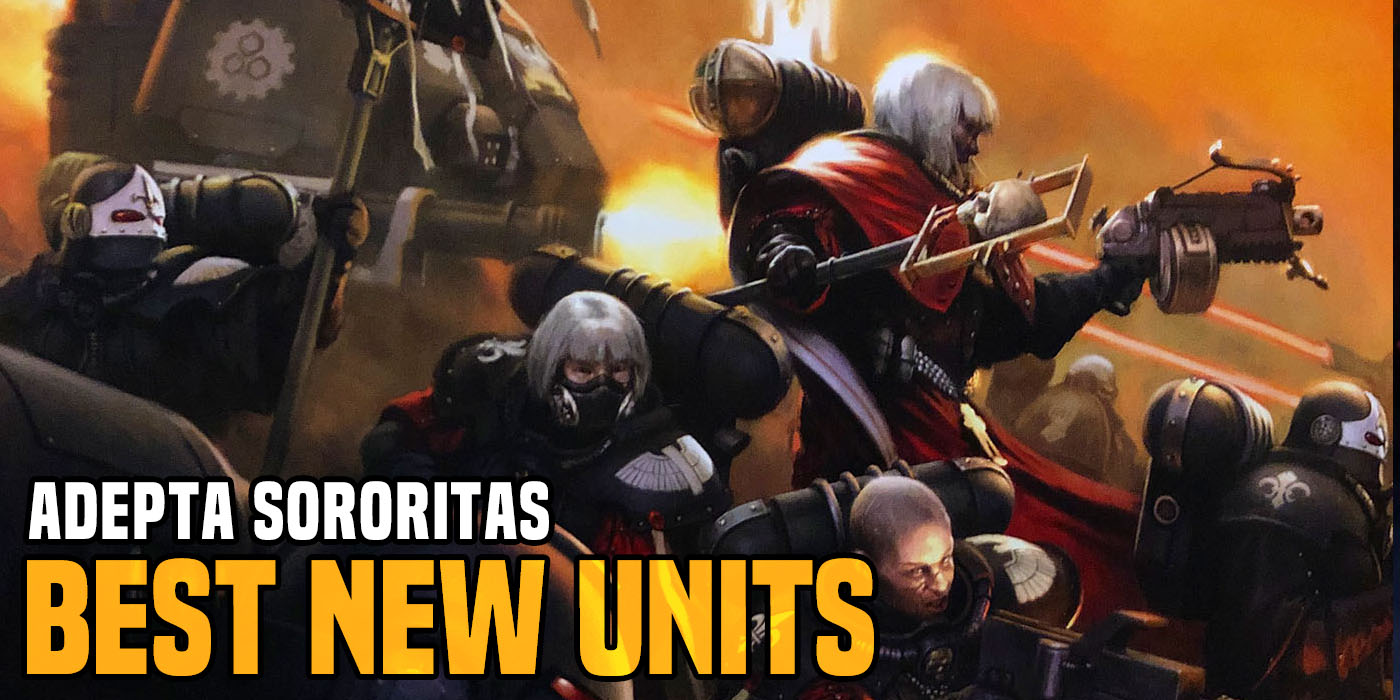 Let’s take a look at and rank the five best new units from the new Sisters of Battle Codex.

Well, loyal servants of the Emperor, after long years of prayer and waiting out faith has been rewarded. We, at last, have in our hands a brand spanking (with rulers I assume) new Sisters of Battle Codex. The book is full of new rules, relics, stratagems, and all the trappings of an 8th edition book, including some fresh new units, that are as lit as the hordes of heretics are about to be.

Now our own dear Goatboy has done an excellent overview of the army, so rather than repeat that I want to dig in a take a look at the new units, by ranking the top five new units in the book. Now, I admit I am cheating just a little bit, as there are ONLY 5 new units in the book, but hey, that means no one gets left out this time, and isn’t that nice? Anyway, let’s dig and look at what we get.

Junith Eruita, aka the “Bully Pulpit,” is a very 40K character and a divisive model. She also ranks last on our list here for a couple of reasons. Now, she does bring a few things to the table. She’s faster than a regular Canoness and tougher. She also allows rerolls one 1s for both hits and wounds, which is nice. She gives friendly units an extra +1 to their invulnerable save, again nice and has more offensive power than a base Canoness. These are all nice, but she does have drawbacks.

The biggest, of course, is that she locks you into playing Order of Our Martyred Lady. If you were going to play them anyway, great, but it is a downside. Secondly, she’s about as pricey as 2 Canonesses, with upgrades, and doesn’t add a whole ton. Her weapons are short-ranged, and she shouldn’t be using them anyway, as she needs to be buffing. That leaves her with re-roll 1s to wound, and the invulnerable save buff, neither of which I think is on its own enough to Play OoOML for. You can take Celestine for the invulnerable save buff, and not get locked into an Order. You could take both to give all your sisters a 4++, but at that point you are casting, and it’s hard to fit all your units in both auras. Overall, Junith is decent, but not miraculous. 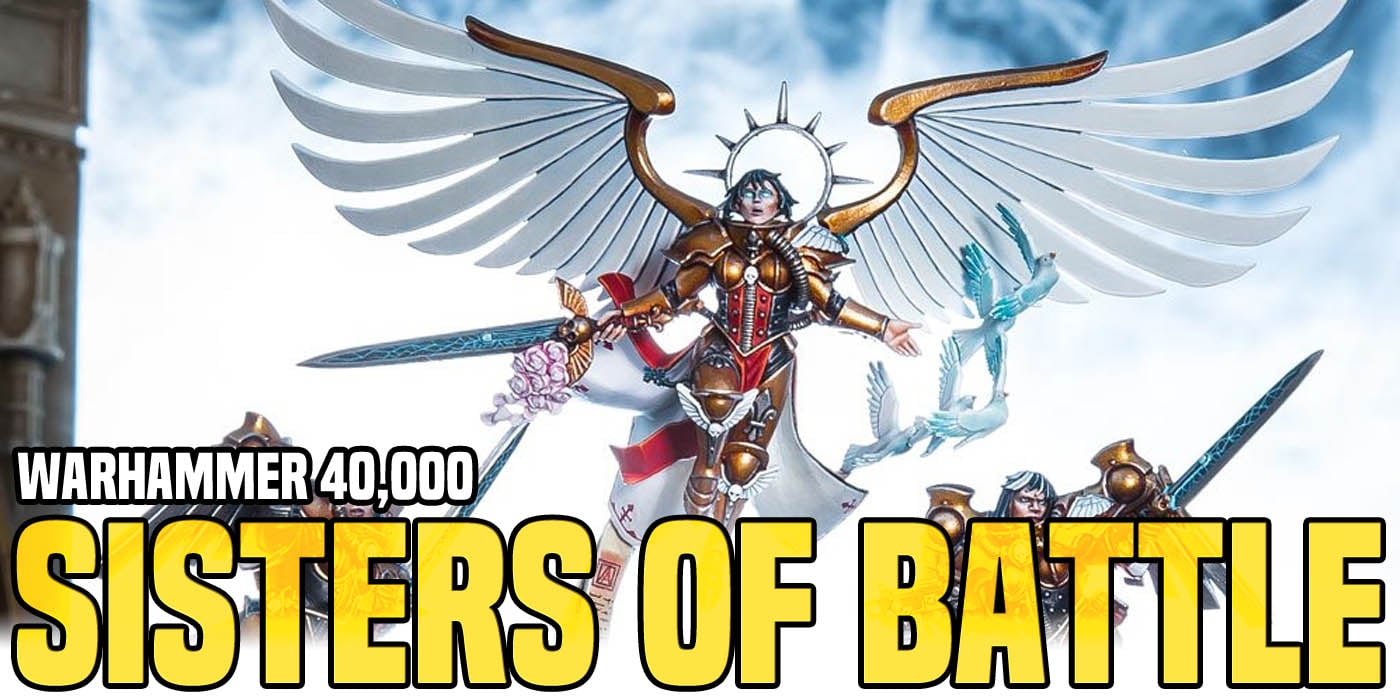 Zephyrim are the new alternative build for Seraphim and are more close combat-oriented. These gals swap out one bolt pistol for a power sword and also get the ability to re-roll wounds in combat. They can also take an upgrade that allows them to re-roll charges. Now, on its face, this unit does seem to have some potential. While it’s only S3, the reroll to wound helps a lot. Also, they can deep strike, and between their upgrade and Acts of Faith, they can get off a guaranteed charge. There are some armies that this will really mess up.

The unit, however, is held back by only having 2 attacks a model and by costing 17 points each. That’s a pretty high cost for a pretty fragile unit. With only two attacks, the Zephyrim are looking at only really getting one wound each against T4 or better target, and will struggle vs. hordes. Now you can buff them, Bloody Rose gives them +1 attack on the charge (you almost have to take Bloody Rose with them to be worth it), a missionary or priest can give them another attack and an Imgifyer can give them +1 S. Stack all those, and you’ve got 4 s4 attacks re-rolling wounds, which is very respectable.

However, the characters needed to get those buffs are on foot and can’t deep strike, neither can the ones needed to give you a 4++ save. That means either you are using Zephyrim without all the buffs, or you are sacrificing their speed and deep strike. Overall the book has better assault units. 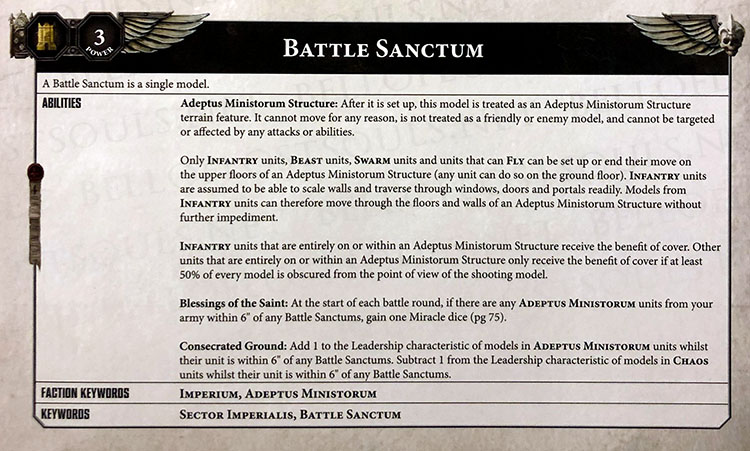 The Battle Sanctum, barely a unit, surprisingly ranks right in the middle of the new units. Like most of the new terrain pieces, it’s got pretty underwhelming rules and has only a minor effect on the game. Likely it’ll look cool, but we don’t have any idea what it will look like or how big it is. Now, just because it’s not great, doesn’t mean it won’t get played. The Sanctum has two main rules. The first gives Ministorum units within 6″ +1 LD and Chaos forces -1 LD.  This is forgettable as morale doesn’t really matter in the game, and Sisters already have high morale and ways to ignore it, Chaos likewise doesn’t care.

The 2nd rule gives you a miracle dice at the start of each battle round, as long as you have a Ministorum unit nearby. This does effectively double your base dice, which is pretty nice. Also, the Sanctum gives infantry units cover. At only 50 points I can see this being useful, giving you extra miracle dice and a guaranteed bit of cover, it’s a cheap buy, and I won’t be surprised if it gets played. I would think GW needs to show pictures soon, or TOs need to rule on how big they can be, lest players go crazy with a massive Sanctum to give their whole army cover.

2. The Triumph of St. Katherine 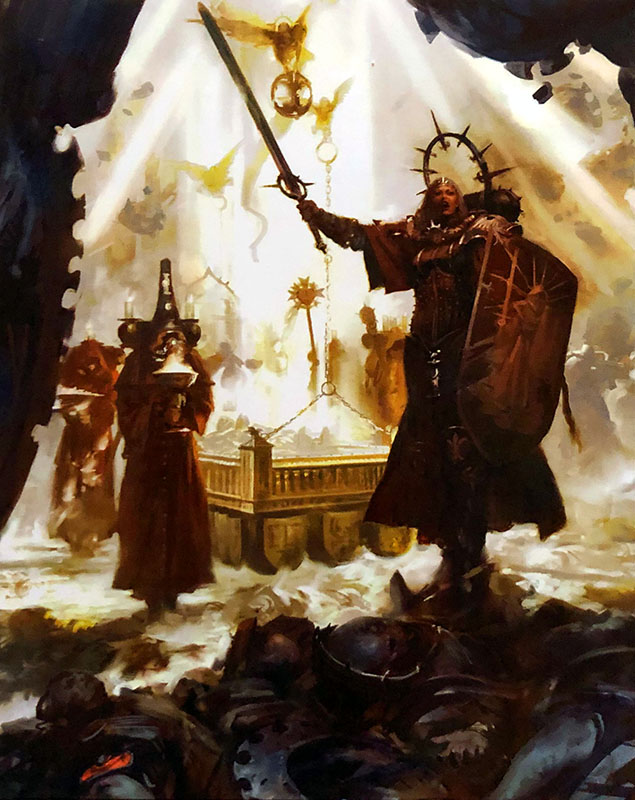 The Triumph of St. Katherine is the absolutely mad new character without a model in the book, and one of the unique units in 40K. This thing is less a unit and more a moving diorama, but for all that, it seems pretty solid. Now it is a bit pricey for Sisters running at 185 pts, though it does fill an HQ slot. Also, and unlike the “Bully Pulpit, it can go into any army and isn’t limited by Order. For it’s cost, the Triumph does a fair amount of things. It’s pretty solid in melee, putting out a lot of decent attacks.

It’s also got a ton of Auras. In short, the model gives you more and better miracle dice, lets you make more AoF, buffs your sisters in close combat, and can do random mortal wounds. All of these are pretty good, and this is a solid centerpiece for a close-range or melee focused list. It’s totally vulnerable to being shot, but I think overall, it’s a solid option for a lot of builds. 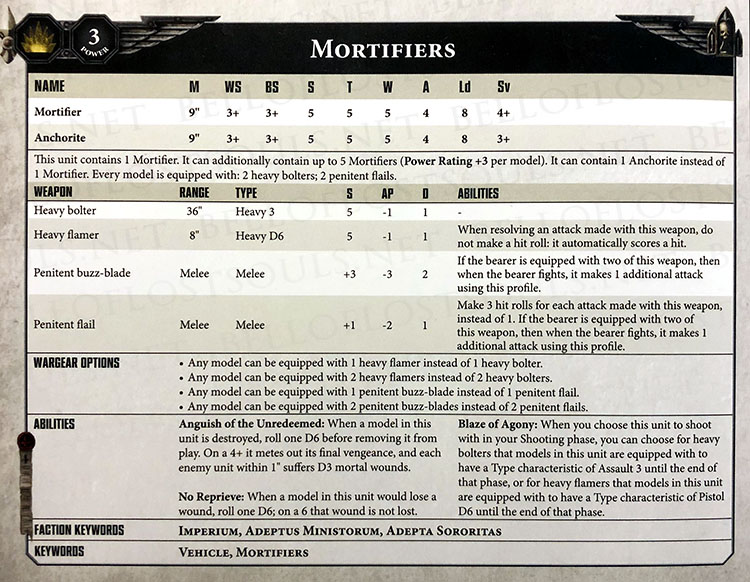 Mortifiers are the new variant of Penetant Engines; they are piloted by Sisters of Battle and the best new unit in the Codex. Statline wise these gals are a big bump up from basic PEs, with a 9-inch move, vs. .7, and WS and BS 3+ vs. .4+ and 5+ (not that BS matters for PEs).

Other than that, ,they have the same solid stats of the new PEs, 5s for strength toughness and wounds, and four attacks. They get a solid loadout as well, with their choice of 2 guns, mixing and matching between heavy flamers and bolters, and 2 CC weapons, again mixing and matching with buzz-blades and fails. If you take two of the same CC weapon, you get an extra attack – and you should. They also get some decent rules, with the biggest one being the ability to make their guns better.

Overall I think you keep these guys with the base loadout. For 56 points, you get a model with 15 s6 attacks and six heavy bolter shots, that can move and shoot without issue, and you can have 6 in a unit. That’s a really solid unit. With stratagems, the unit can also advance and charge, and/or fight twice. Since the unit doesn’t get any of the Sisters rules, other than strats, I could also see this being a unit you use as allies, maybe in place of Bullgryns in an AM army. Overall I think its an impressive unit that is good in both shooting and close combat. I think they are the best of the new units and I can’t wait to field 18!

Let us know what you think of the new units, down in the comments!

Author: Abe Apfel
Abe is that rare thing, an Austin local born and raised here. Though he keeps on moving around, DC, Japan, ETC., he always seems to find his way back eventually. Abe has decades of experience with a wide range of tabletop and RPG games, from historicals, to Star Wars to D&D and 40K. He has been contributing to BOLS since almost the start, back when he worked at and then owned a local gaming store. He used to be big into the competitive Warhammer tournament scene but age has mellowed him and he now appreciates a good casual match. He currently covers 40K tactics and lore, as well as all things Star Wars, with occasional dabbling in other topics. Abe remains in mourning over the loss of WFB to this day.
Advertisement
Editorials Rules Sisters of Battle - Adepta Sororitas Warhammer 40k
Advertisement