RPG: When AI Takes On The Role Of Dungeon Masters 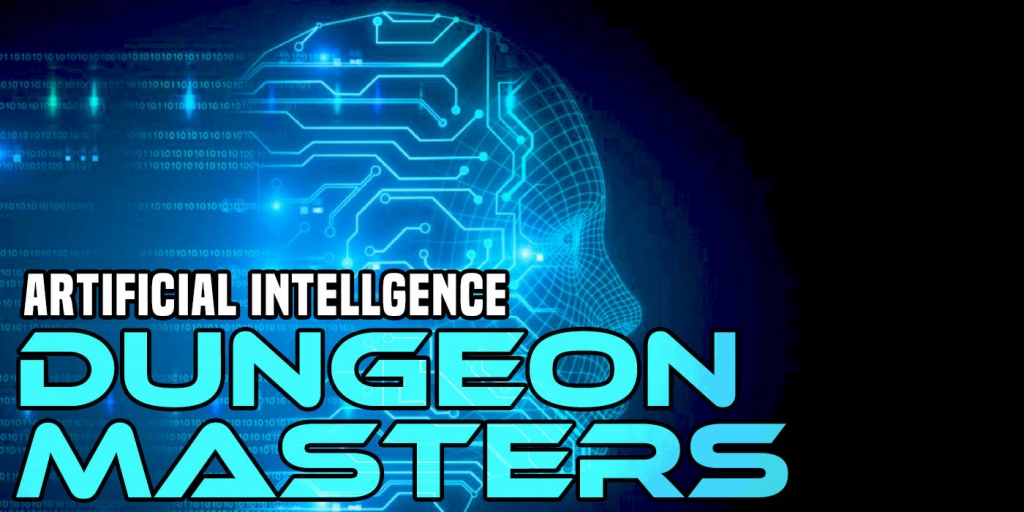 If ever you needed proof that we live in the future: an AI is currently learning to be a dungeonmaster. What happens next involves giraffes.

It’s only a matter of time before the robots would figure out how to play roleplaying games without needing humans. Over the last two years, we’ve seen artificial intelligence starting to learn everything about roleplaying games. From creating custom monsters and spells, as well as surprisingly intricate character backstories and names, neural networks have done an entertaining job of learning what behavior goes into running a successful game of something like Dungeons & Dragons. Now it seems, they are that much closer to making the next big leap–now they have stepped into the role of Dungeon Master. Come try for yourself!

via AI Dungeon (From the BYU PCCL Lab) 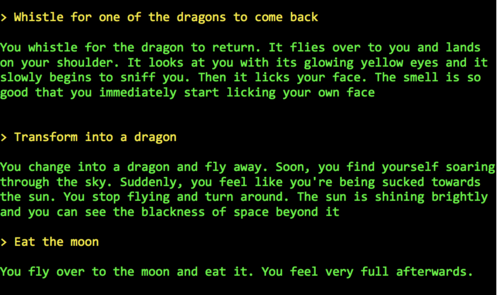 Imagine an infinitely generated world that you could explore endlessly, continually finding entirely new content and adventures. What if you could also choose any action you can think of instead of being limited by the imagination of the developers who created the game?
Welcome to AI Dungeon 2.

AIDungeon2 is a first of its kind AI generated text adventure. Using a 1.5B parameter machine learning model called GPT-2 AIDungeon2 generates the story and results of your actions as you play in this virtual world.

Unlike virtually every other game in existence, you are not limited by the imagination of the developer in what you can do. Any thing you can express in language can be your action and the AI dungeon master will decide how the world responds to your actions.

What does all that mean? For now, it means that this neural net, emulates an old text adventure game, only instead of spitting out pregenerated rooms and scenarios, the AI creates based on an initial seed, and then responds to your typed actions–which is basically the core, atomic element of any RPG. Someone says “this happens, what do you do?” And then runs with whatever you answer.

So it is with AI Dungeon 2, where they have trained the neural net on a collection of text adventures from choosyourstory.com, then modified the AI to help it decide which settings and characters to play with. You help decide on the starting prompt, and then from there the game is your own. 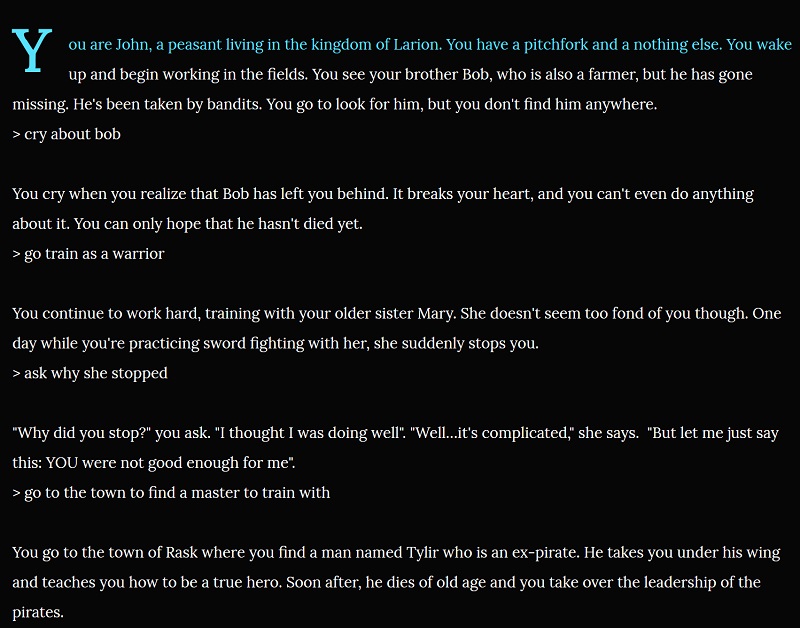 And as you can see, these stories can get quite complex. It really does let you do whatever you’re after. And depending on what you seed it with, these adventures flow into strange directions that you half decide, half just follow what has happened and trying to hang on to the AI-controlled ride.