OMG OMG OMG – let’s take a look at the previewed cards for the Separatist Fleet!

For too long have we suffered under the heel of the decedent and corrupt Republic! My friends! My confederates! It is time that we throw off the shackles of oppression and separate ourselves from the tyranny of the Jedi and Senate. We’ve seen the weapons they will be using against us, today lets take a look at the fleets we will muster to hold them off and gain our FREEEEEEEDDDDDDOOOOOOOM!!!! 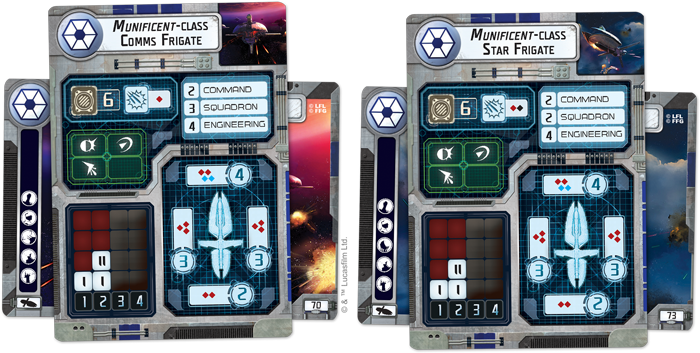 The Munificent is the backbone of the starting Separatist fleet and the counterpart to the Republic Acclamator-Class. The ship is pretty similar to the Republic ship in a lot of ways, with very similar costs. They do feel a little more like Rebel ships, as they are a bit less dependent on big forward arcs. They’ve got the same, kind of OK, defense tokens as the Acclamator, and while they have one less hull, they have more shields on their sides making them pretty similar in their survivability. Both ships are slow, at only speed two, but pretty maneuverable, they can also take the all important Engine Techs to boost speed and maneuvering.  Firepower wise, they have less guns than an Acclamator (a dual arc of 7 dice versus either 8 or 9) but are a bit longer range with a mix of red and blue dice. They will want to stay at range as best they can. They also have very powerful red anti-squadron dice which lets them hit a ton of fighters. The Comms Frigate is better as a carrier and the Star Frigate is a bit better in straight combat but the two ships are pretty similar and solid middle ships. 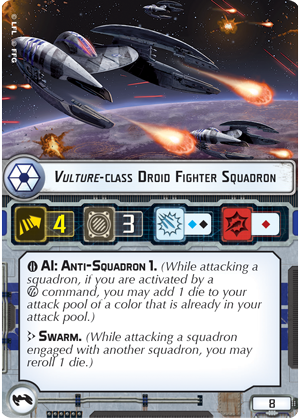 The Vulture Droid is a cheap disposable squadron. It’s tied with the TIE as the cheapest squadron in the game and plays a similar role.  Its got the same speed and hull (4/3) as the TIE fighter and also has swarm. Its anti-squadron is worse, but if pushed with a squadron’s command it gets to be about as good, meaning you really want these guys to be supported by a carrier. With a red anti-ship die its actually better at attacking ships, and if you can get a large swarm to hit enemy capital ships they can do some real damage. I think due to that they are a little better than TIEs, since you don’t really expect either to kill squadrons much anyway and being able to hurt ships is big. 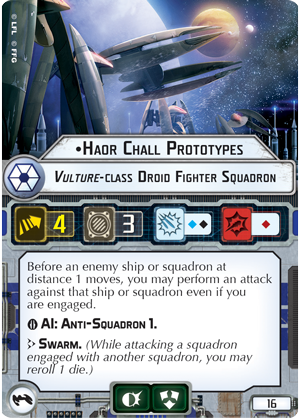 Hadr Chall’s are a unique Vulture droid ace. They have the same stats, but cost twice as much. For those 8 pts they gain brace and scatter, making them much more survivable. On top of that they get to make free attacks at any enemy ship or squadron within distance 1 that moves. This is a pretty nice ability as it might well let you get a few extra hits in here and there. Combined with scatter it likely makes it better than having two Vultrue droids and worth taking. 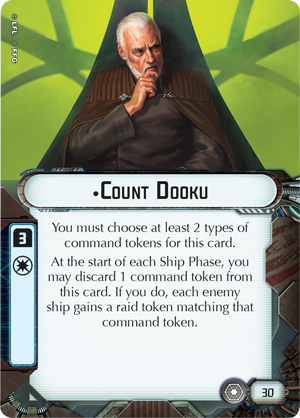 Dooku is a very interesting fleet commander as he doesn’t do anything to directly buff your fleet. Instead  he hurt  the enemy fleet by giving them raid tokens. Used correctly this could really cripple an enemy fleet, by either shutting down their ability to move needed squadrons or stopping them from using maneuver orders and tokens to get a ship out of danger. In a sense he acts a bit like a reverse Tarkin. While potentially powerful, I think Dooku will need a fair bit of skill to really make work, and if you run into an enemy fleet that doesn’t really need orders or tokens to function, he could be less useful. 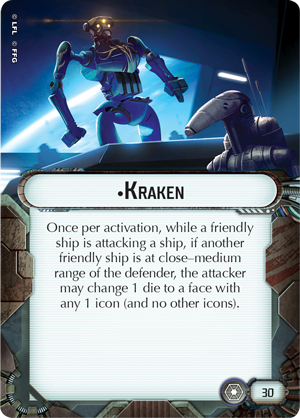 Kraken is the other starting Separatist commander and was shown off a while back. He’s got a pretty powerful rule, that reminds me a bit of Screed. While he can only change a dice to a facing with a single symbol, no doubt hits like Screed, he also doesn’t cost you a die from your pool. All in all the fleet with Kraken that can stay in some kind of formation will have really accurate attacks and likely wants to take upgrades that proc off of crits or accuracies as they can guarantee getting those. Overall I think he’s going to be the commander we see more of, as being able to get a ton of crits is just useful in all situations. 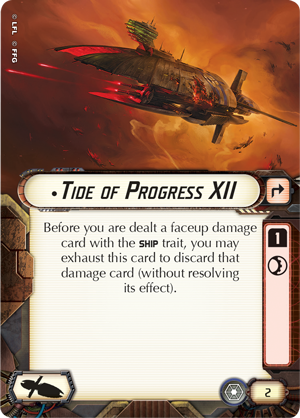 At only 2 pts the Tide of Progress XII is an amazing title card for the Munificent. Getting to ignore a face-up damage card, and its effect is pretty dang rad. Now it is limited to ship cards, but that makes up 36 of the 52 cards in the deck. Even getting to use the upgrade only once in a game means you’re saving yourself 1-2 damage and a horrible effect. For the cost, I don’t know if I can see a reason not to take this. 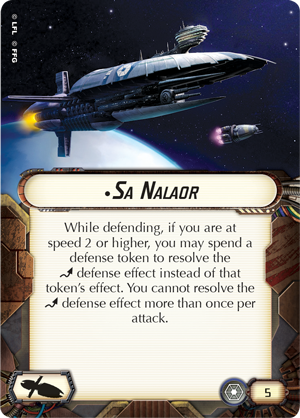 Sa Naldor is another Munificent title card, and it’s pretty simple, letting you turn a defense token into an evade token if you are going speed two or higher (speed 2 is of course the ships base max speed). Since Munficents want to stay at long range this is pretty useful, but not as good as Tide of Progress. 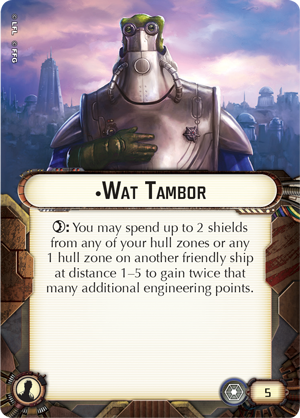 Continuing their trend of trying to make their ships more durable with upgrades, Wat Tambor allows allows you to spend friendly ships’ shields to gain engineering points. Combined with Engineering Teams this could let a ship get like 11 engineering points a turn, with redundant shields you could make a pretty insanely resilient ship, that can ignore crits and go from no shields to effectively full every turn, or heal from half dead to just fine. Tambor seems like he might be even more useful on a larger ship. 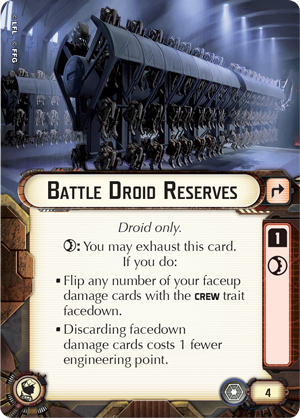 You could also forget engineering teams and take Battle Droid Reserves which allow you get get rid of crew crits easily, and make repairing damage a lot easier. With Battle Droid Reserves and Tide of Progress  you are mostly immune to critical effects and with Tambor could repair up to five points of damage a turn, taking you from next to dead to full health. Pretty crazy. 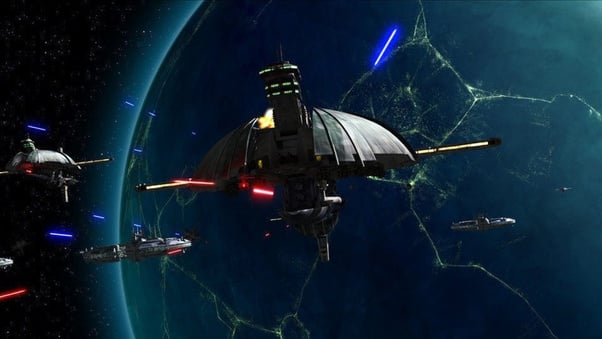 Let us know what you think of the new ships, down in the comments! 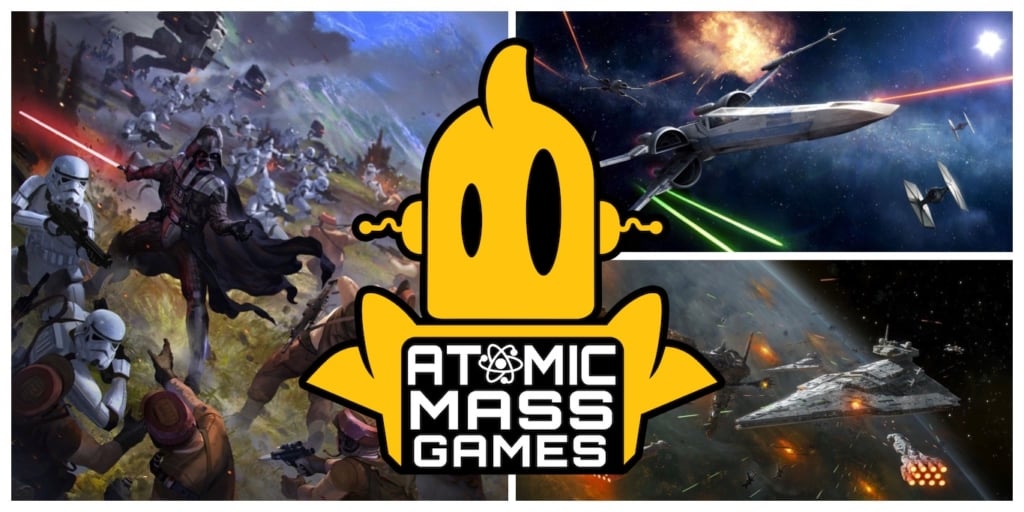