40K Editorial: Return of the Footdar! 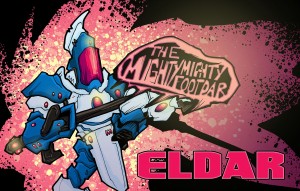 They’re mighty, oh yes, so mighty… After years in the wilderness – the foot Eldar are BACK!

Reecius here from Frontline Gaming and I’ve been waiting a long time to say that! The Mighty, Mighty Footdar are one of my all time favorite armies to play. In 5th ed, a skilled general could play his or her way to victory with them in even the most competitive metas. In 6th they had a brief period of time where the Harliestar was a thing, but Heldrakes but an end to that quickly. Then, the notorious Wave Serpent came out with the 6th ed book and was the thing.

7th dropped and all anyone could talk about was the Scat Packs and Wraithknights and the War Host detachment was largely swept under the rug in favor of a simple CAD. I’ve been trying to make them work in various build-outs all this time but quite frankly, they’ve sucked. Well my friends, I have been play-testing Footdar again in a War Host and let me tell you, they’re back. Boo-yah! 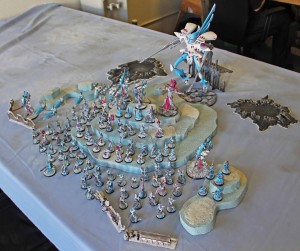 Have feet – will kick butt!

So there it is in all her Candy Colored glory! 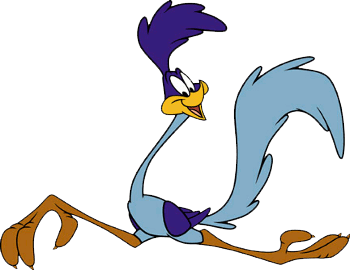 So what makes the list work, you make be asking, incredulously? A few things. For one: speed. HOLY EMPEROR’S THRONE, this list is fast! Like, you wouldn’t believe it fast, especially for a foot based army. The War Host Command Ability, Matchless Agility grants an automatic 6″ run for units that use Battle Focus. This means your infantry are typically moving 12″ a turn, each. The awesome thing about a Run move is that it ignores terrain! So, you fly across the table, even into terrain which typically slows you down. It’s so useful to be able to move a full 6″ avoiding terrain, and then another 6″ into the terrain to gain maximum distance and cover. Once in position, you can then move, shoot and move again out of range/LoS or into cover or out of your opponent’s charge range. It’s super useful. 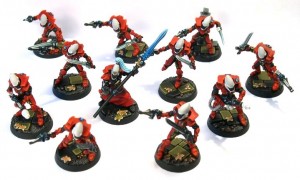 The Guardian Stormhost is the core formation of the War Host. I chose this after initially going with the Guardian Battlehost (which also works great!). However, I needed to make room in the list for the Wraithknight (yeah, yeah, I know!) as I had been trying to make the Avatar work as in my previous version of the Footdar. For one, my Forge World Avatar is my favorite model in my collection, and for two, he is just so boss! Unfortunately, his rules suck hard in a competitive meta and no matter what I did, he just died like a punk without doing anything in test games, even with Matchless Agility.

The Storm Guardians are actually really good! I was more than pleased with their performance. They get free wargear in their formation, so the 6 Fusion Guns at BS4 are so useful, better than the Weapon Platforms of the Guardian Defenders. They serve a similar function to Fire Dragons but at a lower price point and again, with Matchless Agility, they are so quick. In melee, they are better than you’d think with BS5, WS4 and 2 Power Swords.

The War Walkers just erase things. They’re fragile but have a ton of deployment options which is awesome. Twin Link them with the Farseer and they are so savage. Definitely a fantastic unit but they do tend to be a high priority target and often don’t survive more than a few volleys. Be sure to position them to do maximum damage in their first turn or two because there often isn’t anything more than that.

The Farseer is incredible, as well all know. For a measly 100pts, you get one of the few psykers in the game that can operate on his own. His rerolls and Ghosthelm make him very efficient. I tend to stick him in the Vaul’s Wrath Support Battery where he boosts their leadership, is protected by the gun’s T7 vs. shooting, and increases their accuracy.

The Support Batteies are so good! Wow. I tried the Shadow Weavers first as they are cheap, but, found that my army didn’t need any help with anti-infantry. The D-Cannons are just brutally powerful. The short range means they often act more as a board control device than anything else by scaring away enemy units, but that is also super useful. My first turn I typically move and then Battle Focus them forward to the middle of the table in cover and then project a 24″ bubble of death around them. It forces units to be very wary. They often draw a ton of attention and some games die without shooting once, but they are ALWAYS useful. When you play against an army that comes at you, that’s when these bad boys shine. They will reap a heavy toll on your opponent and they will come to hate these bad boys, quick.

The Vyper is a tax unit, but not bad at all. I slap a Star Cannon on mine for some mobile AP2, but mostly he zips around grabbing objectives, Linebreaker, etc. As tax units go, he’s not bad at all. 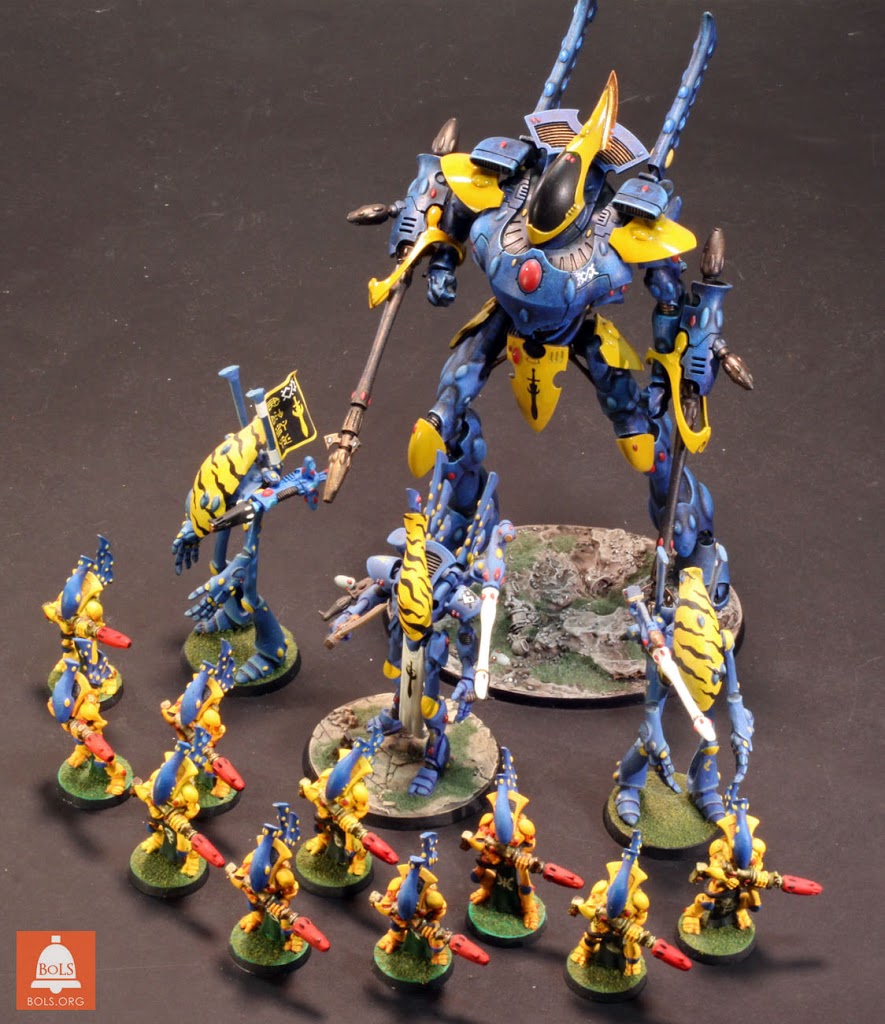 So, as Storm Guardians come in minimum units of 8, it cut the points I needed (along with a single Dire Avenger) to squeeze a Sword and Board Wraithknight. The Wraithknight is amazing tool–as we all know–and comically underpriced. In my list, he provides a pressure unit, a mobile counter assault asset, and a counter to other big nasties like Knights, Stormsurges and Wraithknights, etc. Not much to say, lol, the Wraithknight is a bully of the battlefield. 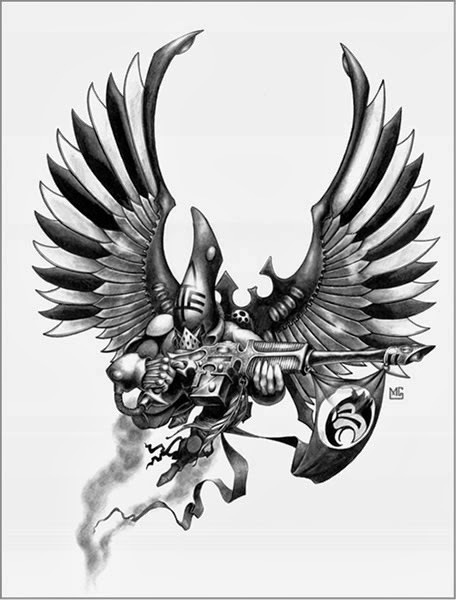 This is a ridiculous formation. Most people who’ve faced Eldar are familiar with it. So, so, so good. I pack mine with two of the best units in the game:

Warp Spiders. Yeah, they are over the top. The speed on these guys is absolutely absurd. At BS5, they simply shred things. Damaging vs initiative is brutal, most units are getting wounded on 2’s. These guys are my heavy hitters and they fly around the table just obliterating things, then annoyingly fading away with Hit and Run and Flicker Jump (and yes, I play it as only a single jump, not infinite as that is just too obnoxious! haha). Oh yeah, and choosing to pass morale tests…lol, sure, shy not?!

Swooping Hawks are just as good as Spiders, in different ways. Where Spiders shoot you off the table, Hawks are a fine instrument for winning games. Their incredibly speed, ability to go anywhere on the table, ignores cover weapons and Haywire Grenades make them incredibly versatile. They grab objectives, Linebreaker, and kill vehicles (and Imperial Knights) like nobodies business. Easily one of the best units in the game. 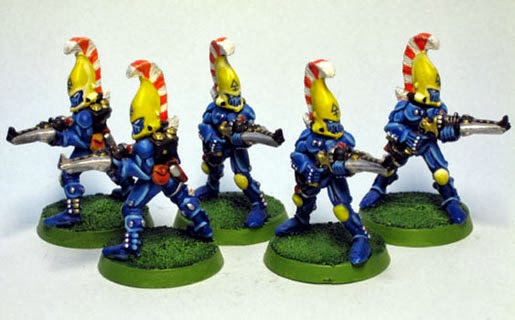 This is a vastly underrated formation in my opinion. To be fair, I love Dire Avengers. Easily one of my favorite units in 40k. I have always used them, even when they were pretty dang sub-par. Now though, WOW. These guys are savage. With Matchless Agility, they have an effective 30″ range. BS5, Bladestorm and especially Killing Strike, make this formation so incredibly deadly. On the turn they choose to shoot 3 times each, you get 87 BS5, pseudo rending shots…it is absolutely devastating. Anything toughness based just gets shredded. Combine this with psychic buffs (particularly Doom) and it’s messy. Great formation, plus reroll morale tests just because, is super useful.

So far I have taken these fellas out against a wide variety of top tier lists and never felt outclassed. They really have the tools to hang. Some of the lists that I used to give me trouble aren’t around any more (Leaf Blower IG, etc.) and now with the incredible speed the army has, I don’t think it would be as much of an issue. The only game I got my butt handed to me was a game going second vs. Tau, who D’d the Wraithknight in one shooting phase and then double shot the Riptide formation…lol. That was a short game! But, in the same match-up going first, it was a slaughter the other way with Tau getting wiped out by turn 2. Eh, that is kind of the way it goes with Tau.

I really feel it is dang near a TAC army. It is fragile, takes some getting used to but once you do, the hitting power on it is absolutely crazy. I will continue to play test it, but so far, I am stoked to have one of my favorite lists back! As always, be sure to check the Tactics Corner for more great articles!

~Do you think an Eldar foot list can handle the current meta?

Author: Reece Robbins
Reece Robbins, is one of the most respected names in tabletop gaming. He founded Frontline Gaming and the largest Warhammer 40K tournament in the world, the Las Vegas Open. Reece has been playing competitively and covering Warhammer since the 1980s. He has won major events including Adepticon.
Advertisement
Armylists Editorials Eldar Warhammer 40k
Advertisement

Signals From the Frontline Episode #396 Elves or Aelves?? 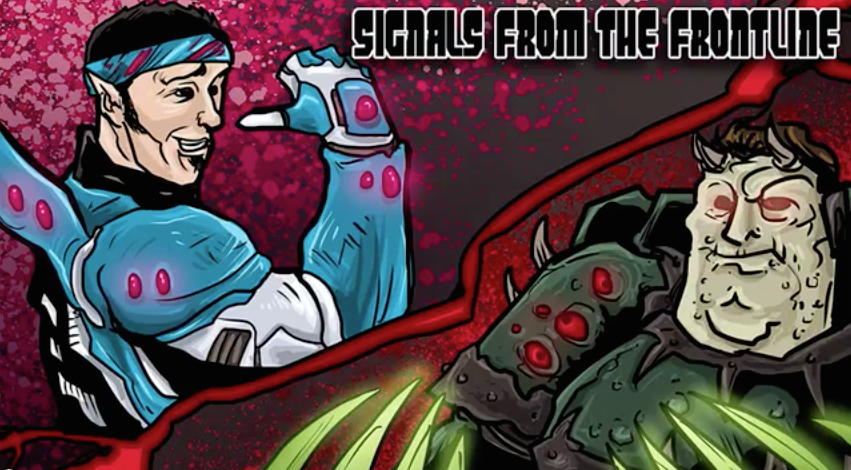