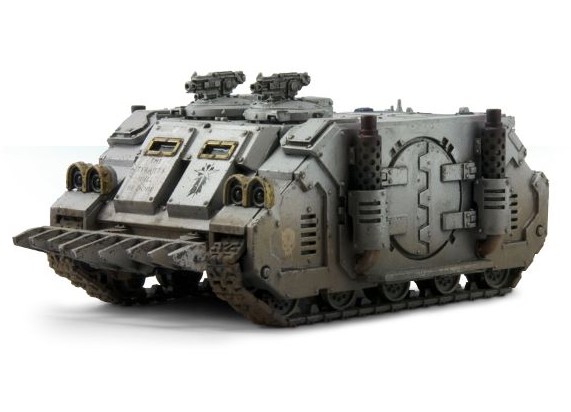 Will the Forge World Mk I Deimos Pattern Rhino follow in the footsteps of the Contemptor and get redone in plastic? Come see the latest:

Massive Loads of Salt on this one

The MKI Rhino that has been long rumored to potentially be moving to the plastic Horus Heresy line, is now “No Longer Available” on Forge World’s Site.

Now this highly popular vehicle has also been in a lot of combos offered by Forge World since the Betrayal of Calth’s release in November, however it’s unclear if they are just working on a new batch OR if it will not be returning in resin.

We did see a number of weapon upgrades get the same treatment recently just before Forge World unveiled new “plastic friendly” ones!

We’ve updated a whole range of bolters, special and heavy weapons for Space Marines so they’ll fit perfectly with the new plastic Space Marines in Mk IV armour that you’ll find in The Horus Heresy: Betrayal at Calth.

So will we see a new MK1 Rhino in plastic anytime soon? Well this is what the latest word on the street was from a few weeks ago about new Horus Heresy plastics:

via an source who spoke of BoLS on condition of anonymity

Plastic Heresy kits will be arriving in Q1

The initial kits will be boxed sets for Mk. IV Tacticals and Cataphractii Terminators

The initial kits will tie into the upcoming February 6-7 Horus Heresy Weekender. Look for GW pre-orders to arrive then.

Looks like for now the magic eight ball says: “ask again”. But if I was a betting man, I’d say it’s a huge possibility that all those plastic legionnaires will need a sweet ride to get them to battle when the line goes up on the shelf in stores!