The third Mythos Pack for the Forgotten Age Cycle has been announced for Arkham Horror: The Card Game -Heart of the Elders. It’s time to load-up your supplies and head back into the jungle of madness!

Arkham Horror: The Card Game is currently my favorite LCG from Fantasy Flight Games. I’ve been collecting and playing the game because of it’s unique narrative-driven scenarios and fun deck-building around each Investigator. It’s a wonderful mix of deck-building, Role Playing, and challenging game design that have sucked me in.

The Forgotten Age is the next deluxe expansion for Arkham Horror The Card Game. It’s kicking off the next big story arc for the game. Within that arc, there will be 6 Mythos Packs. We’ve already gotten to take a look at the first and second packs. Each one builds on the story and takes you to the next location where you’re investigators will have to test the limits of their own sanity.

Now we’re getting a peek into the third Mythos Pack and it stabs straight into the Heart of the Elders!

After completing a scientific expedition in the rainforests of southern Mexico, you returned home only to discover that you had done more harm than good. Now, you must return to some of the darkest corners of the Earth to undo your mistake. Fantasy Flight Games is pleased to announce the upcoming release of Heart of the Elders, the third Mythos pack in The Forgotten Age cycle for Arkham Horror: The Card Game! 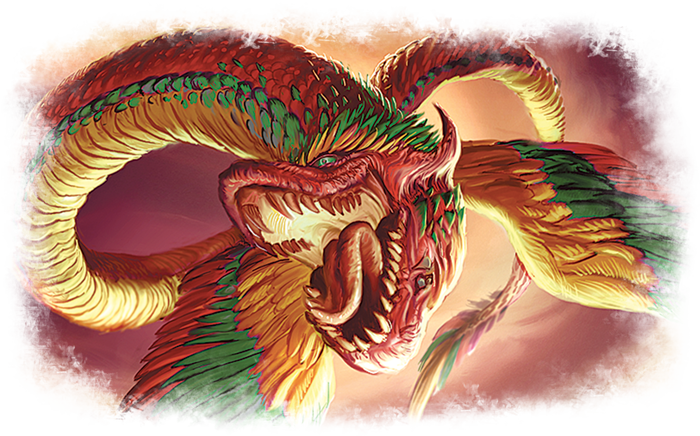 One of the things I really like about Arkham Horror: The Card Game is that the story can unfold in unpredictable ways. Your successes and your failures craft your own narrative; things can go very differently between groups of players. One of the cool things about this particular Mythos Pack is that previous events from the scenarios will have you playing through two very different scenarios.

Heart of the Elders contains scenarios V-A and V-B. The 60 cards in the pack contain a mix of player cards and the scenario(s) to play out. It’s a trip back into the jungle to stop the madness – or to drive you further insane!

If you’d like to read more about the story up to this point, FFG has a full article with more of the plot details. I won’t spoil anything further, but we are going to cover some of the new cards that will be in the pack.

I Think The Jungle Is Trying To Kill Us

We talked about the poison condition in an earlier preview. Well it’s not just the fauna that is trying to poison you, because the “strange Flora of this region” is also quite deadly! 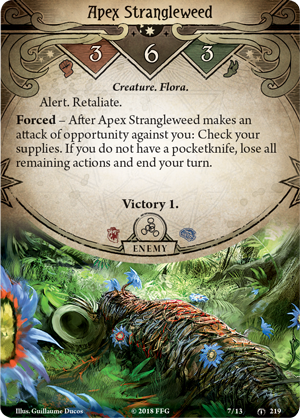 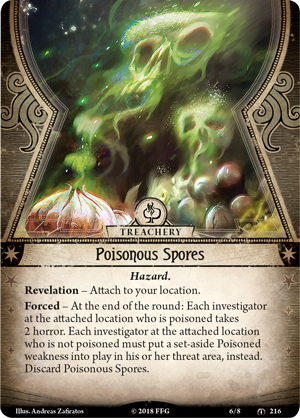 Again – poison by itself isn’t deadly. It’s the Treachery cards that kick in to mess with you. You’ll have to weigh the value of carrying the right supplies (like a pocket knife) vs medicine if you want to make it out alive.

The Mythos Pack also cotains a few extra helping hands you can recruit to your cause as well as some new upgrades to help you make it through this deadly trek. 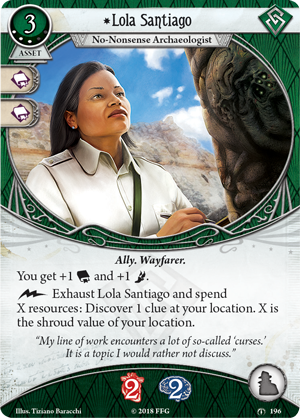 Lola Santiago is an Archaeologist who can help with clue grabbing – it’s a quick action (so it doesn’t use one of your 3 actions in a turn). But it’s going to cost you resources – but being from the Rogue class, resource generation is something they do quite well. 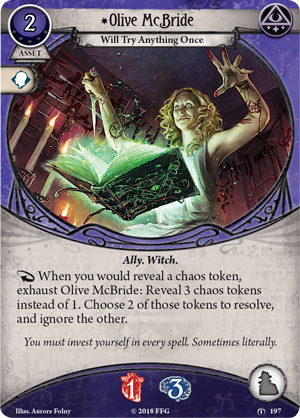 Olive McBride can help you avoid pulling the dreaded “tentacle” token which is an auto-fail. However, you’ll have to resolve the OTHER two tokens which could mean some pretty high minuses. If you’re willing to take the risk (or if you’re pretty confident in your bonuses) she’s a very powerful ally to have. 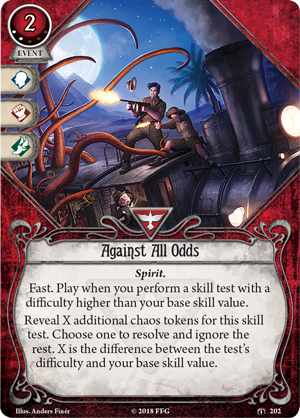 Against All Odds is similar to Olive as it allows you to grab multiple tokens and choose the result you want. Sometimes that’s a choice between bad and worse – but maybe it will be enough to tip a test from auto-fail to barely pass. 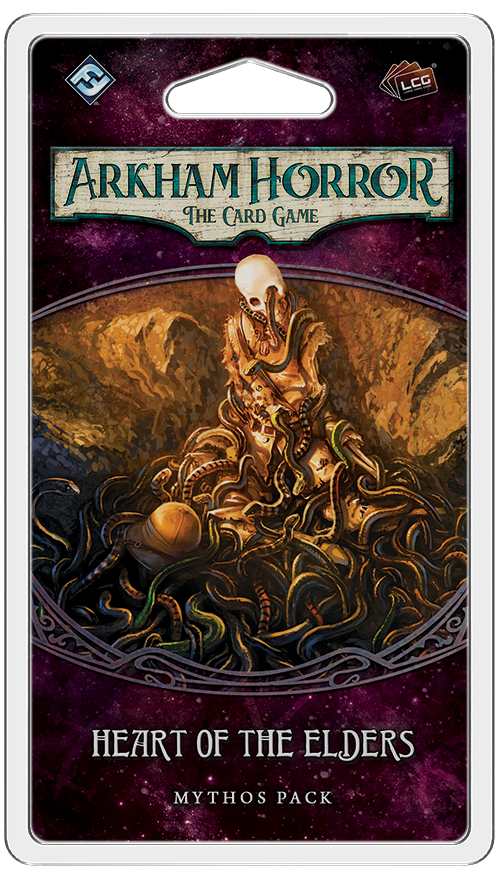 Heart of the Elders is the third Mythos Pack in The Forgotten Age Cycle.

Following the events of The Boundary Beyond, you and your team of investigators head deep into the jungles of southern Mexico in search of an ancient, forgotten cavern. After several days of trekking through the jungle, you find what you believe to be the entrance of the cave, but something is not right. Six pillars surround the cavern, carved with strange symbols. Are they a warning? A lock? You must investigate this further, but time is running short. Your supplies are already starting to run low and countless eyes watch you from the shadows of the trees. What secrets are they trying to protect?

This Mythos Pack features an immersive two-part scenario that takes you on an adventure both above and below the Earth. Immediatley forced to face the consequences of your choices, you shape the scenario as you go, determining which dangers you face and which allies you rely upon. Isolated from the rest of civilization, who can you trust?

Heart of the Elders is up from Pre-Order from FFG and your FLGS now!

Pathfinder: The Blood of the Ancients Runs Deep