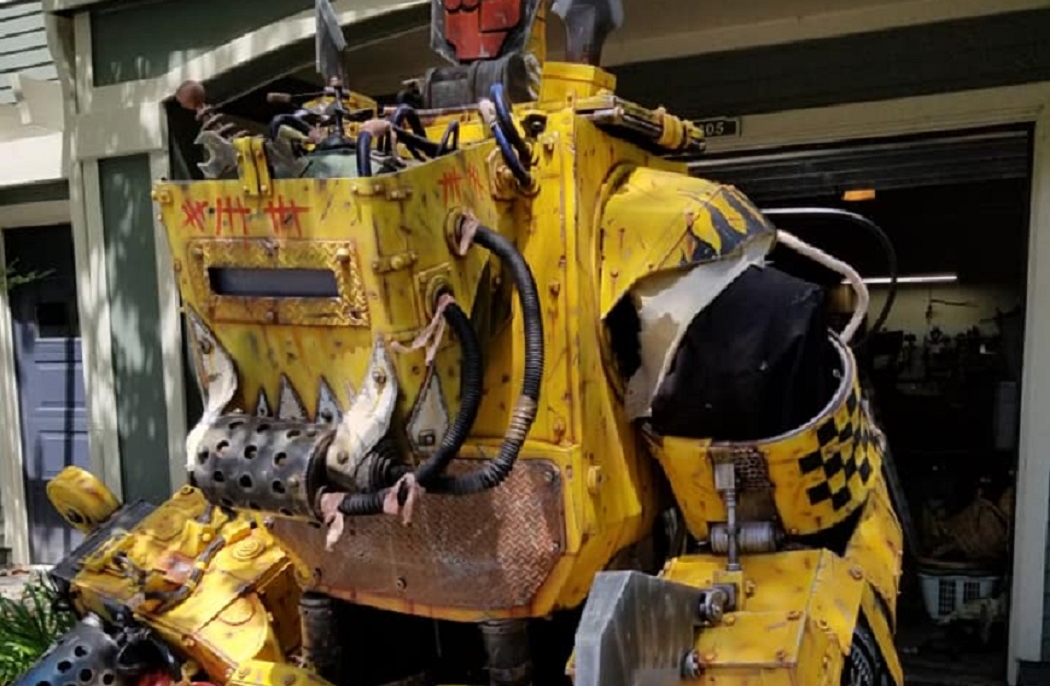 Humies is all weak scum that deserve ta get stomped. …dis 40k Ork Cosplay- he knows how ta fight.

We’ve covered space marines galore, Eldar Farseers, and a wide gamut of tech priests, sisters of battle, and beyond. Today though, it is time for the true heroes of the Warhammer 40k Cosplay universe to shine- the Orks. 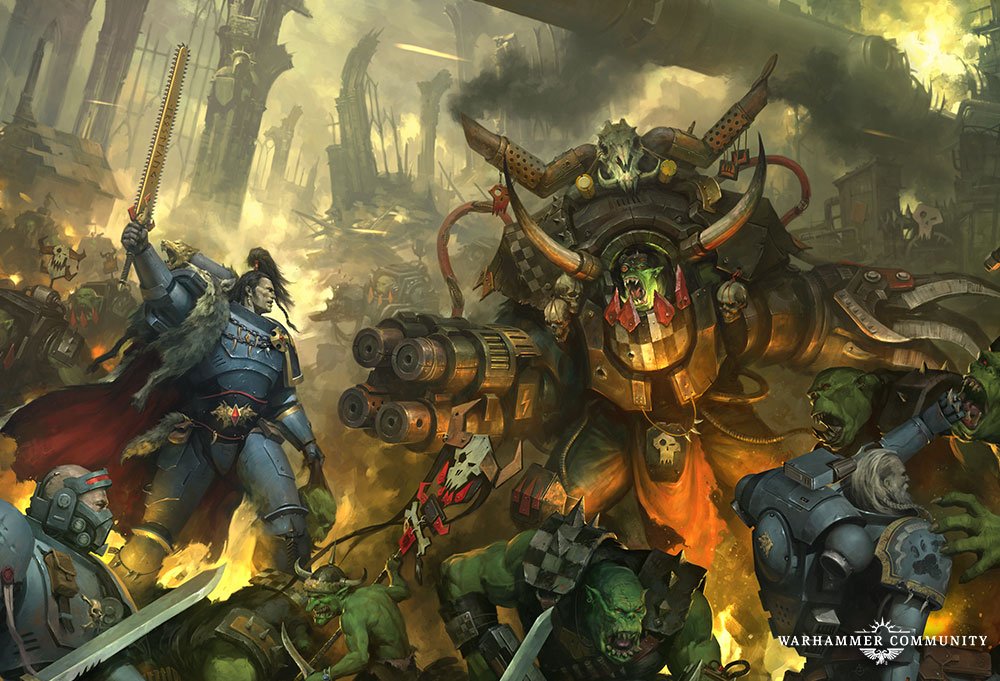 Husband and Wife cosplay duo Fred and Elle Designs have a huge love for the Warhammer 40k Universe, and are constantly upping their construction game and portfolio of cosplays. This month, they are finishing a unique and IMPRESSIVE Ork build. We have featured their work before, which you can see HERE and HERE.

Check out a walkthrough video of this Ork Cosplay HERE.

“Warhammer 40K Ork. Almost finished the refit of the Big Mek into a Nob in Mega Armor. All the internal support structures and changes work. Needs a few tweaks to make it completely stable…. and to add details to the base itself. 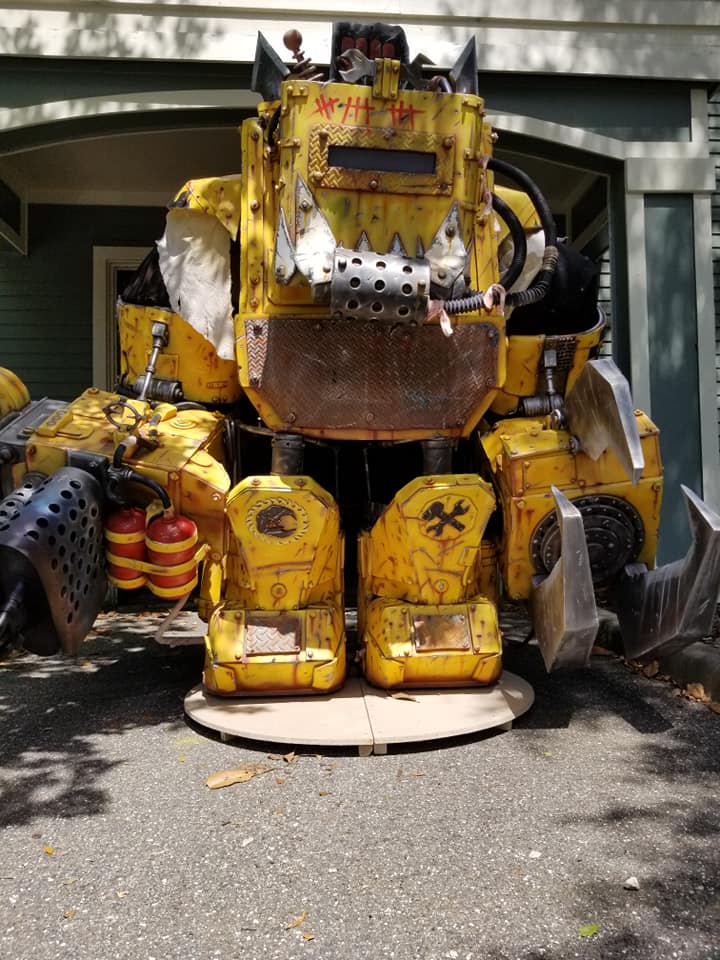 “We’re da best. Think diffrent do ya? Come and have a go then, ya runty little wimp!” 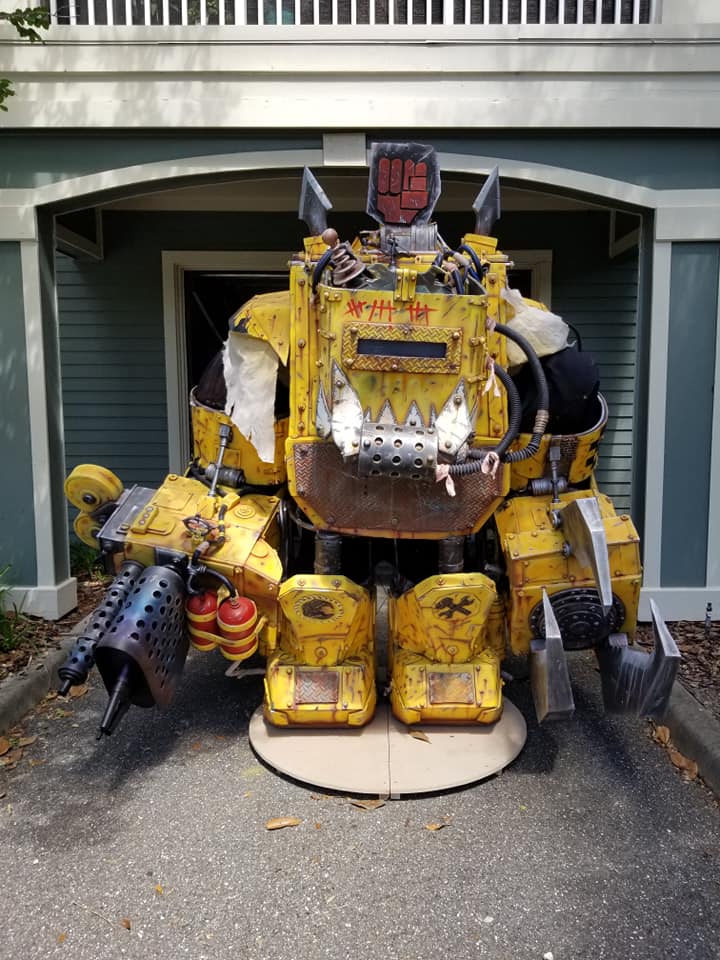 “We is gonna stomp da universe flat and kill anyfink that fights back. we’re da Orks, and was made ta fight and win.” 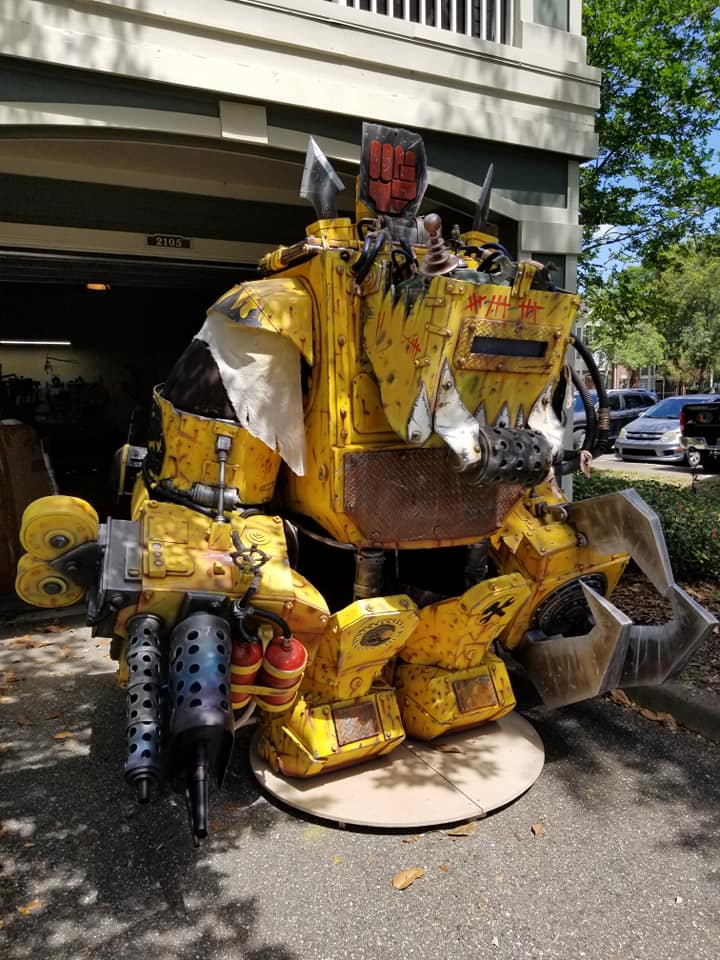 “We’re safe ’ere Gobbitz. There’s no way da beakies can get to us at the top of dis cliff…”
– Last words before being overrun by Space Marine Assault troops from the Salamanders Chapter 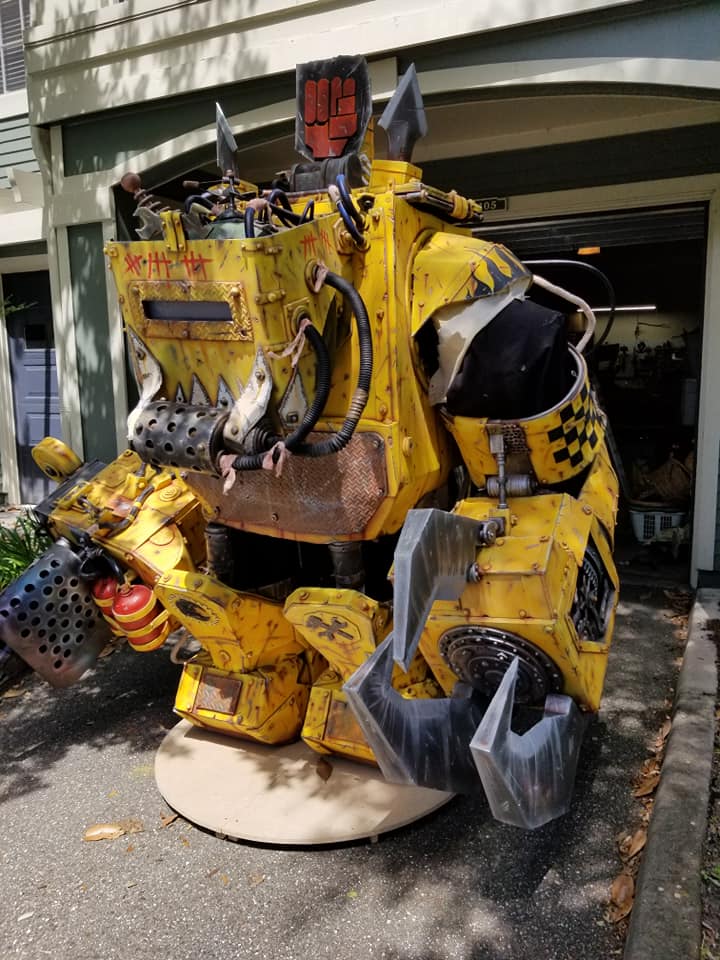 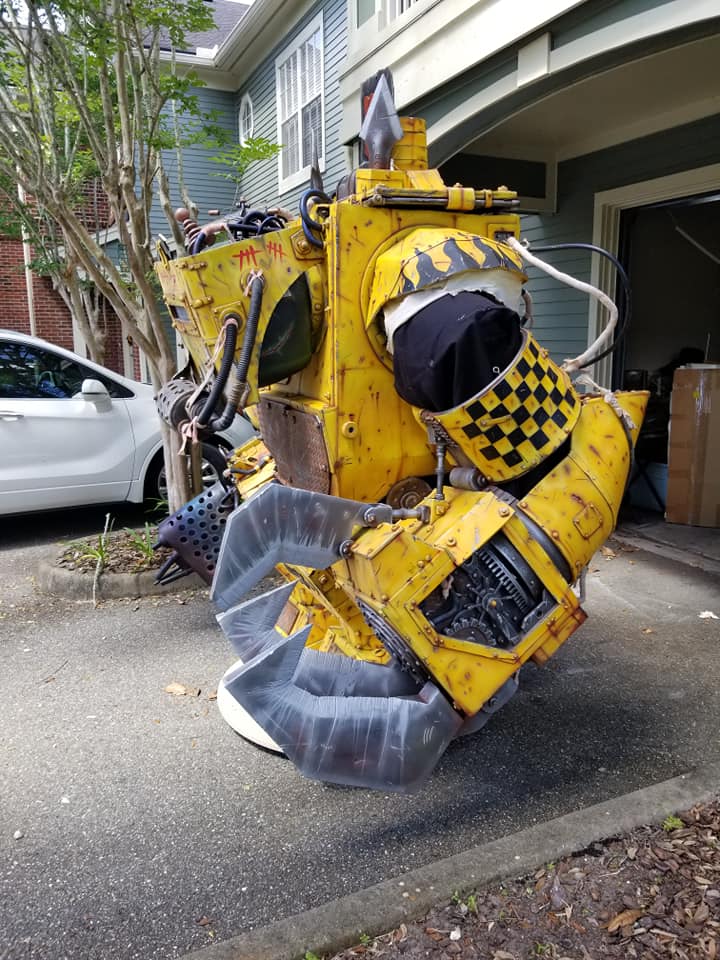 “OI! Lissen ta me wen I’z talkin’ to ya! We’z gonna go on ‘dere ship, we’z gonna smash it up an’ kill anyfing dat gets in our way, an’ den we’z gonna get back on da boat an’ go home. Dat’ll show ‘em. Do you lot of ‘umie runts unnastand dat? Good. Now, wiv me: WAAAGH!” 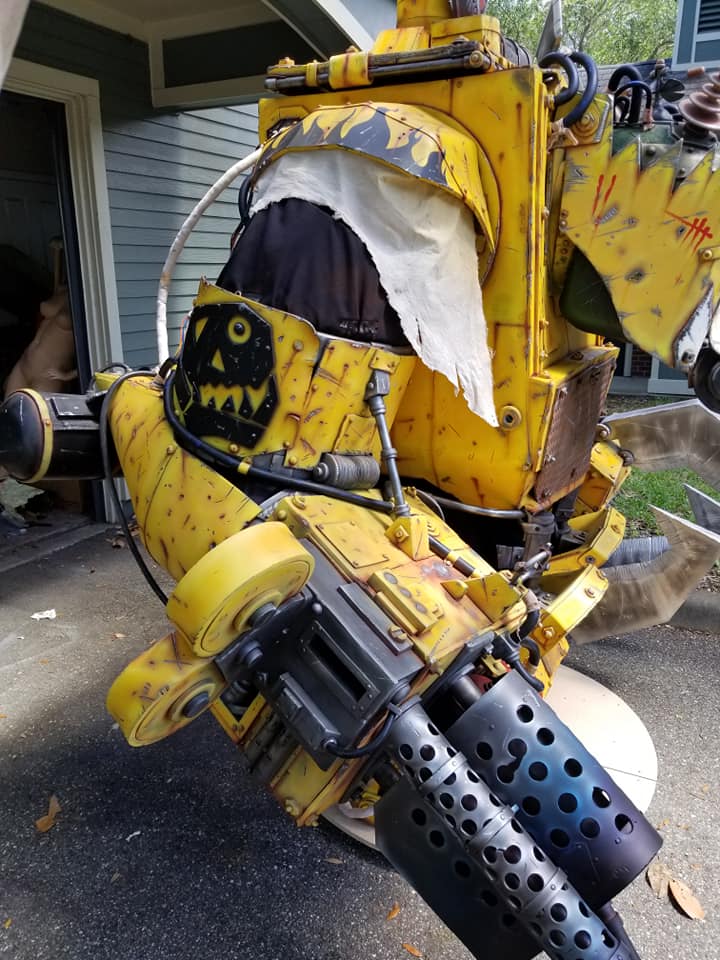 “Wotter yer mean we only got four Stompas? We had a lots of ’em! Roight – we need ammo and scrap, an I know just where ta get ’em.” 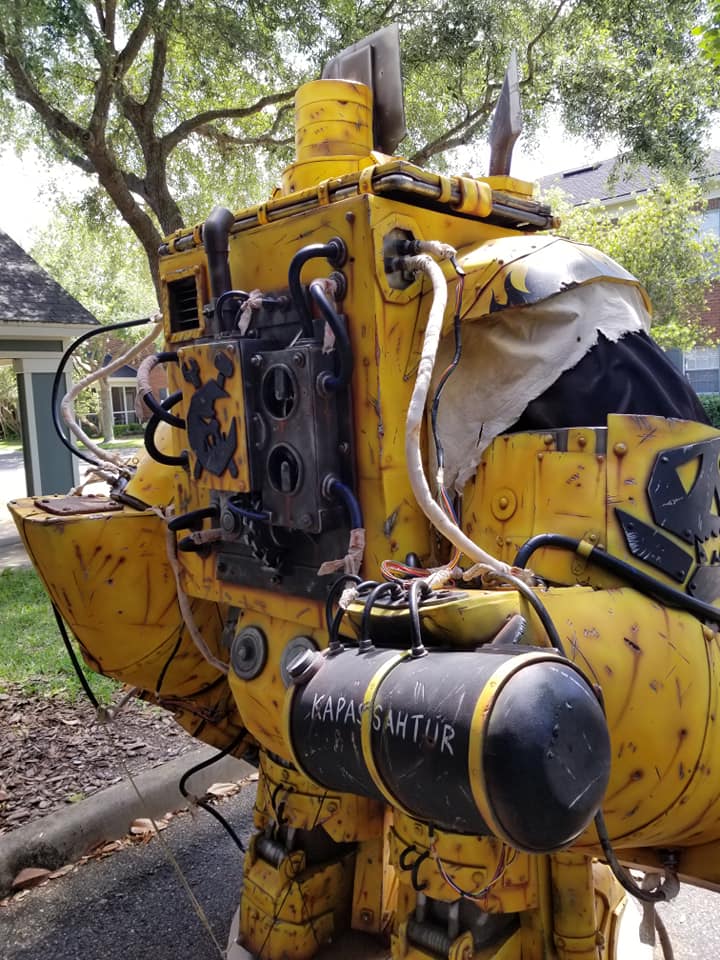 “Yer boss, dese weapons are the best wunz ever. Da Boyz will hit better, an ‘arder than ever before!” 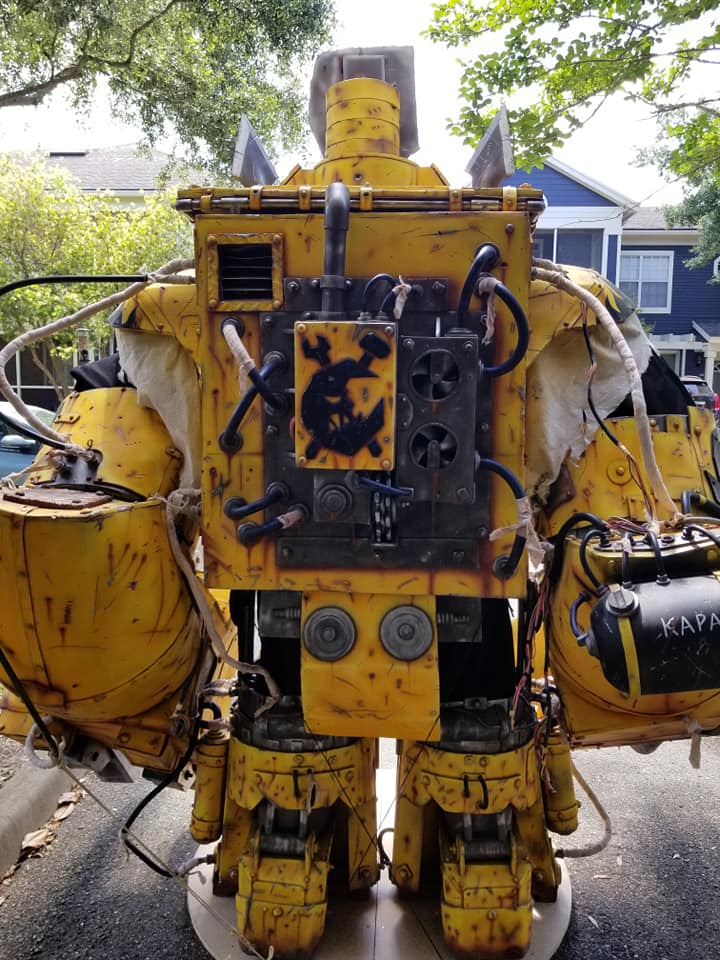 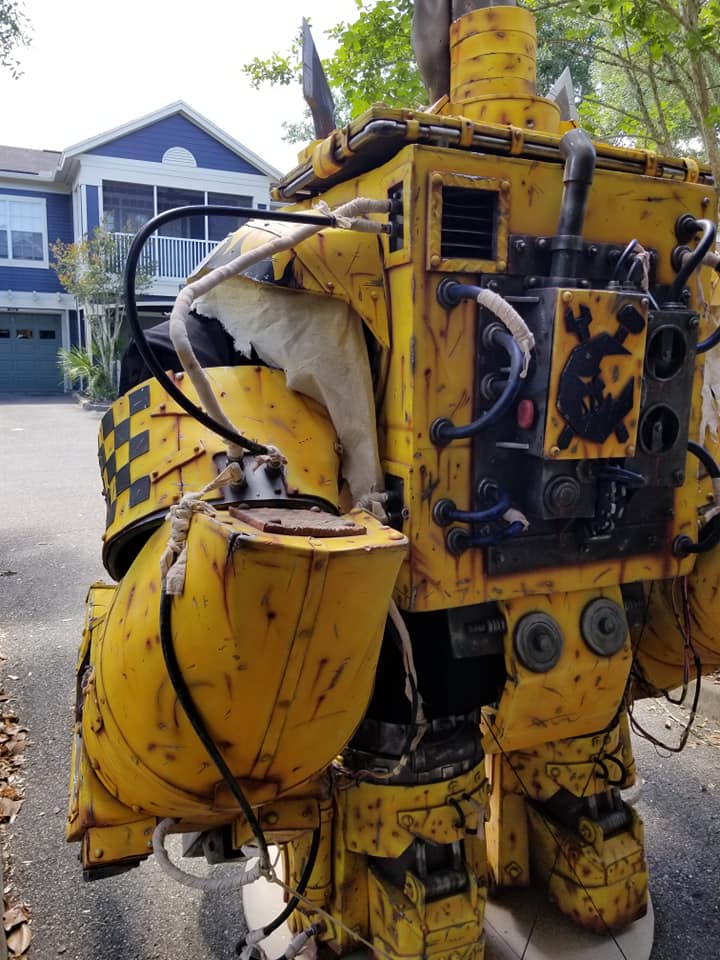 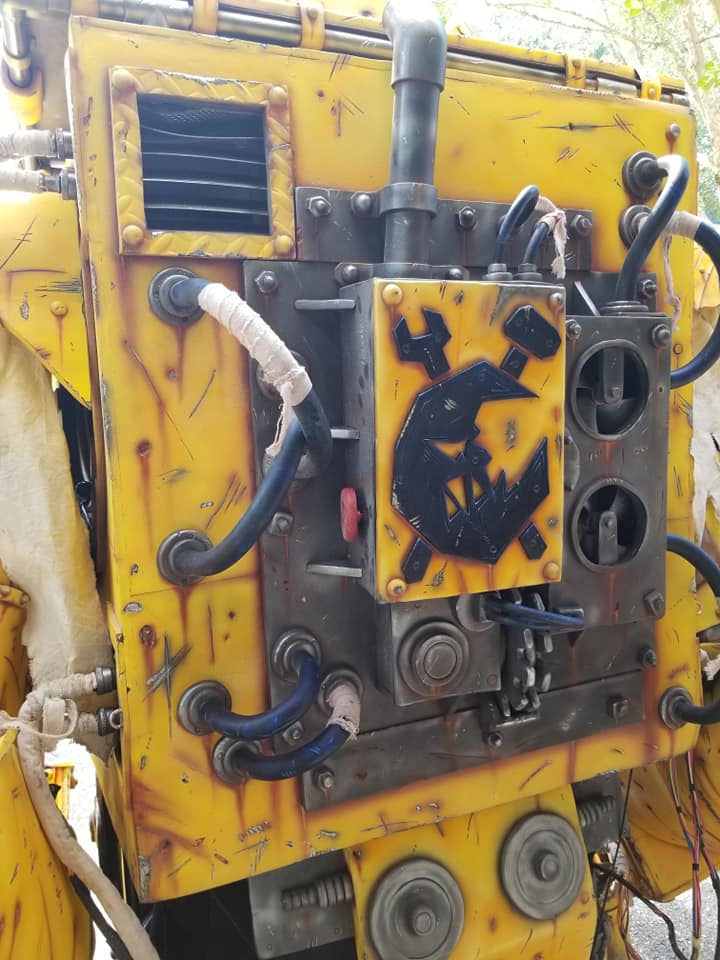 “We don’t fight fer food, or fer teef, or guns, or cos we’s told to fight. We fight cos we woz born to fight. And win.” 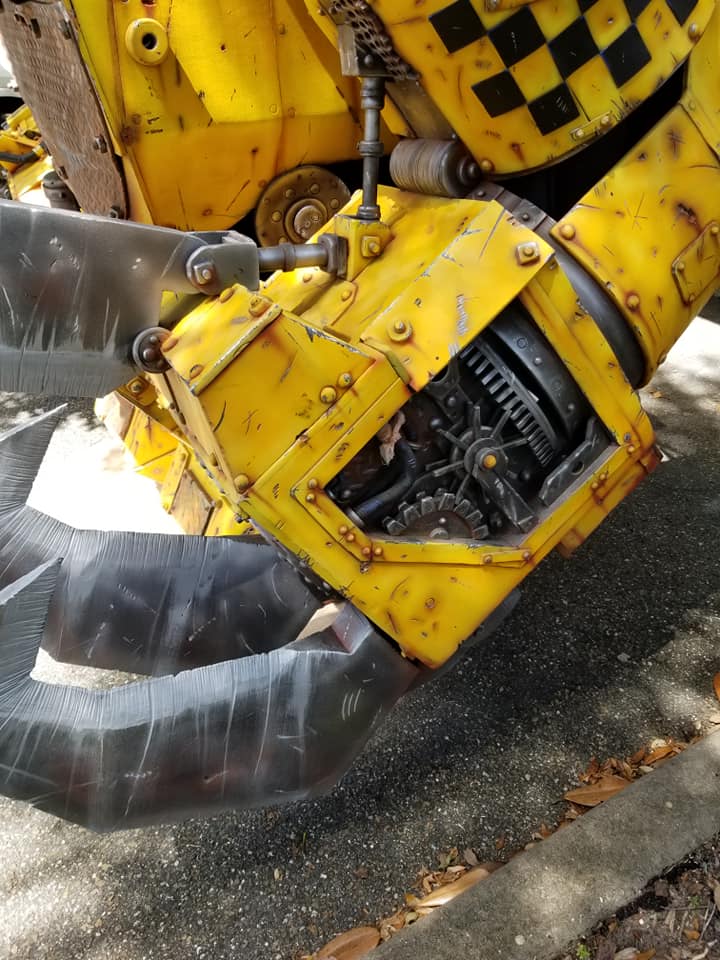 “Right, first I’ll take those teef out for yer, dat should help ease da pain in yer leg. Grokkit, hand me that wrench. Now then… Open wide, and say… AAARGH!” 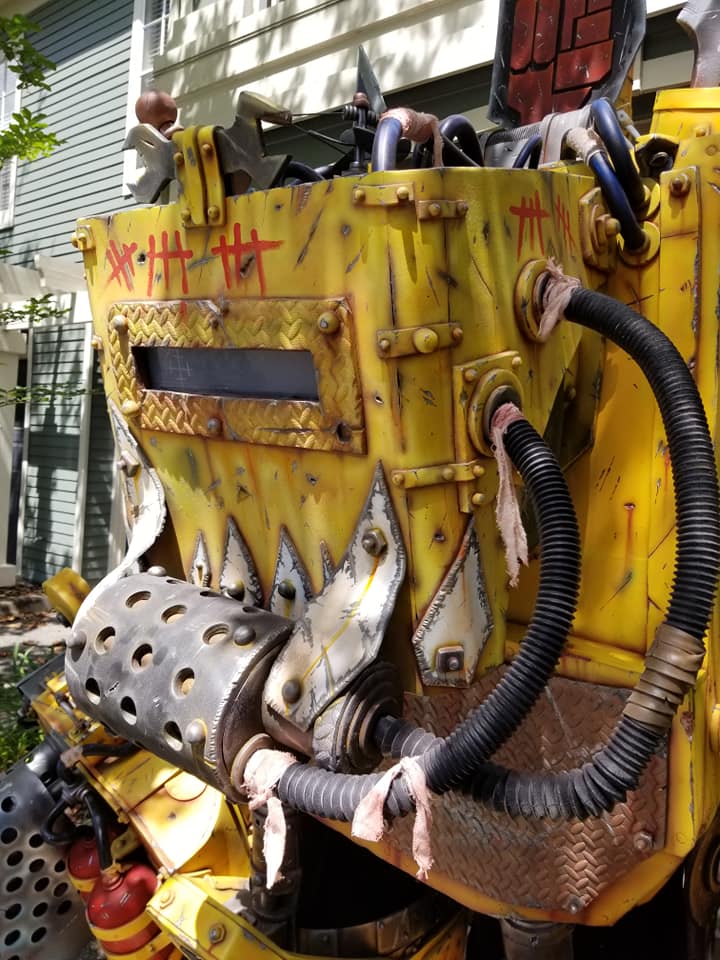 – Nah, I put da little feller in upside down.” 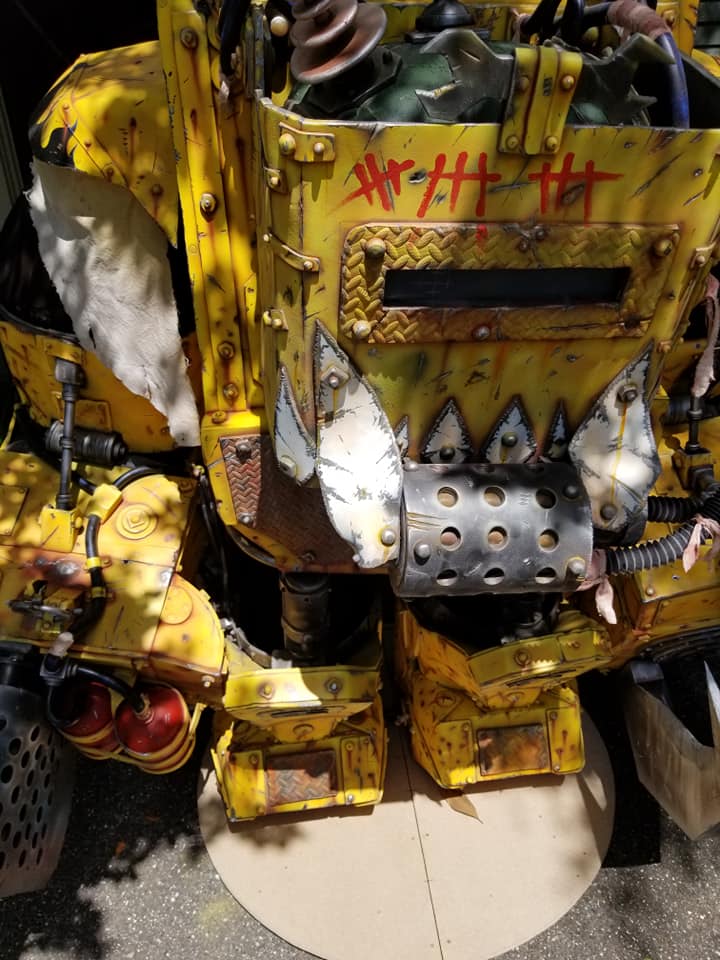 “Wot’s faster than a warbuggy, more killy than a warbike, and flies through da air like a bird? I got no bleedin’ idea, but I’m gonna find out.” 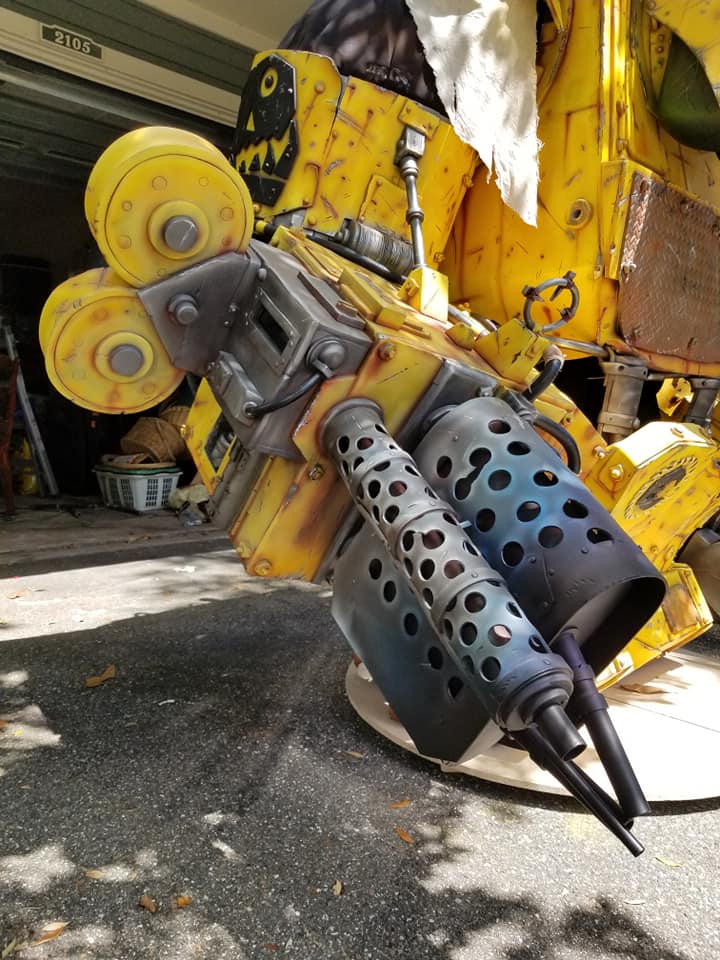 “Evil Sunz like two fings most: Going fast and krumpin’ stuff. Dat’s why we’z so good at it.” 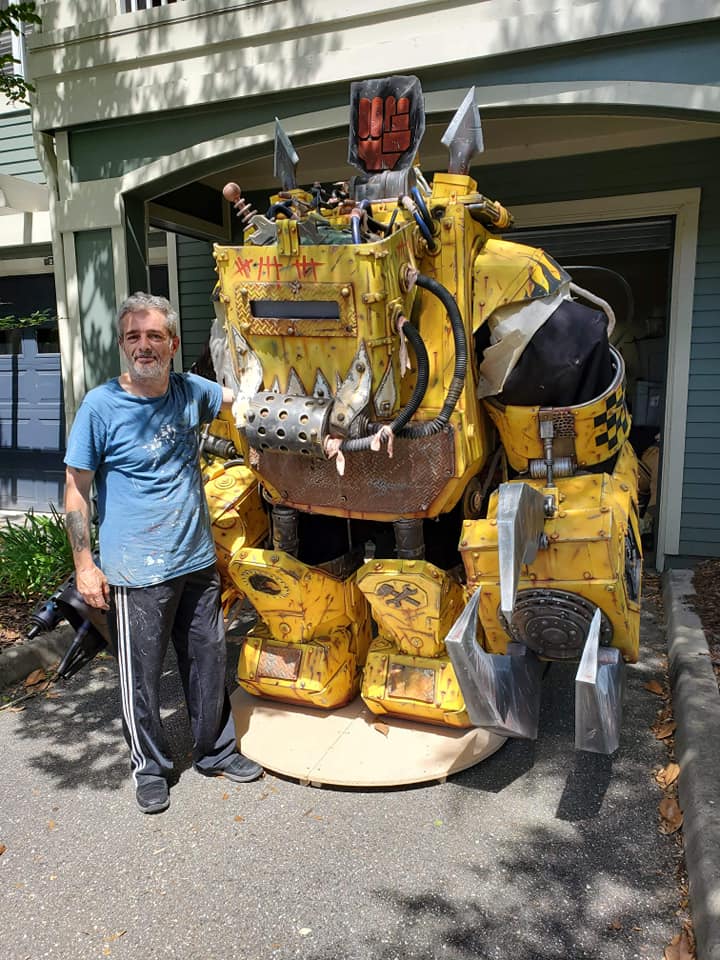 Author: Jennifer Larsen
Jennifer Lynn Larsen, aka "Mayhem's Muse" is originally from the Seattle area of Washington State, and manages Communications and the Cosplay Beat for BoLS. Her Cosplay Awards include the RTX Judge's Choice Award, and Dragon's Lair Austin's Cosplay Symposium. Jennifer has been a Cosplay Guest Judge at RTX, Tacticon and Genghis Con in Colorado. Her cosplay work has also been featured in Girls Who Love Monsters, Geek Fuel, Renaissance Magazine and other publications. Jennifer has modeled in the Her Universe Fashion Show, Precision Camera's yearly Precision Camera University, and has taught several workshops for photographers about partnering with cosplayers and creative muses/models. For BoLS, Jennifer covers everything from video games, fantasy, comic books, to sci-fi and historical garb. She is a lifelong enthusiast of retro video games and loves Dungeons & Dragons, urban fantasy, tabletop games, VR technology, and historical archery. Jennifer has set several National Records through USA Archery’s Traditional Division for Asiatic Bows, and earned 4th Place in the World Nomad Games in Kyrgyzstan in 2018 for Women’s Korean Archery. She is currently studying at Denver University for her Masters Degree in Organizational Leadership.
Advertisement
Cosplay Orks Pop Culture Warhammer 40k Warhammer 40K 9th Edition
Advertisement 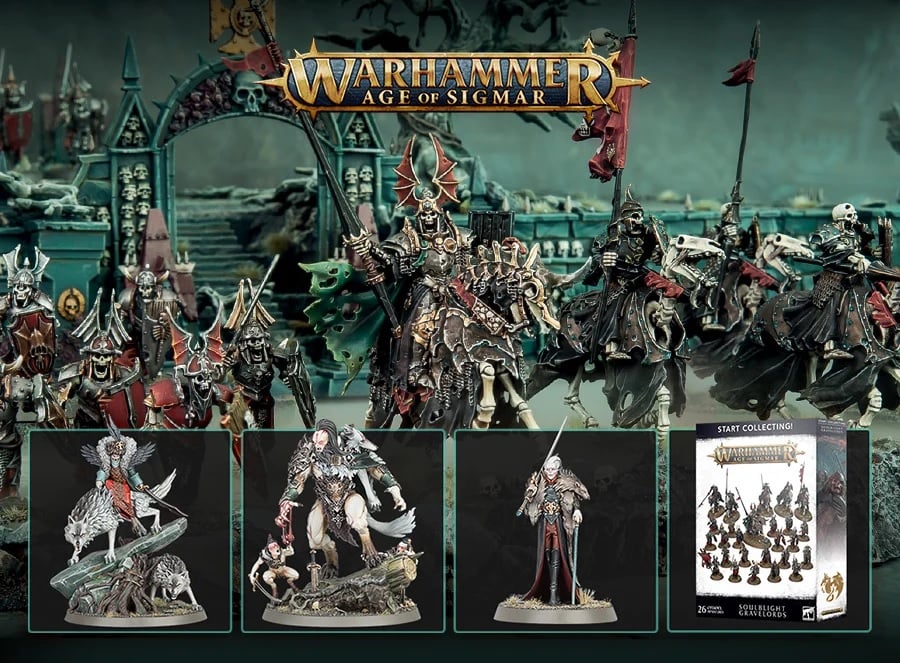