40K: Necrons On The Horizon For April

Are the Necrons coming in April? Signs point to yes.

The T‘au are locked in for March. We got that confirmation via the White Dwarf pictures and the fact that GW running their previews for the T’au all this week. And we know that the next three Codexes are in fact T’au, Necron and Drukhari:

The mystery is which codex is next – Drukhari or Necrons. But if I had to put money on it, I’d probably go with the Necrons.

Rise of the Machines

“So why Necrons?” Well, for one, I’m hedging my bet here. We also know that Forgebane is coming soon. Could that be in April? Man I hope so – that boxed set looks freaking GREAT!

We know that the boxes are at least at the printers at this point and the components are probably being packaged/shipped around as we speak. Stuff is happening logistically in the background that we don’t know about. Then again, GW showed up to Adepticon last year with a couple dozen boxed sets of Shadespire and that product didn’t launch for a few more months.

So maybe Forgebane was just being shown off early and someone snapped some quick pics and BOOM. The cats out the bag either way and GW has announced it’s coming “Soon” – which could be next month or 6 months from now…who really knows.

“Soon is the Robot Code for Exterminate!”

The Evidence is Growing

There is one more piece of evidence I’m leaning on to place my bet however…and that’s the teaser from the latest White Dwarf:

Coming in April 2018 – “Ancient Evils” is listed. Now, that phrasing is a pretty common title for the Necrons. Heck, even back when GW was pushing Stormcloud Attack they called them “The Ancient” – take a look: 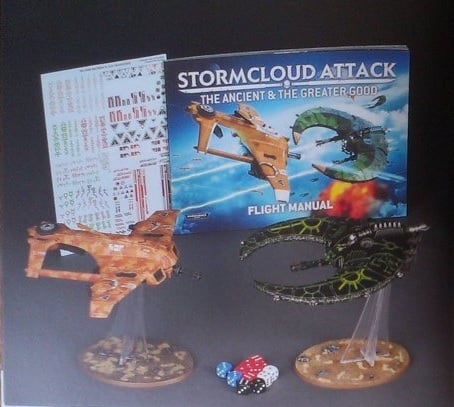 Oh and look at that – it’s a T’au flyer too. It’s almost like the T’au and Necrons are tied together for some reason…

Could “The Ancient Evil” be referring to the Drukhari? Or perhaps something to do with Slaanesh? I mean, maybe… But in the grand scheme of the 40k universe, the Necrons are older than even Slaanesh. According to Lexicanum:

“Slaanesh was fully born at the moment of the Fall of the Eldar. “

And the Fall of the Eldar was AFTER the Old Ones raised up the Eldar to help them fight The War in Heaven. So actually, no – I don’t think it would refer to Slaanesh or the Dark Eldar…they aren’t as Ancient as the Necrons afterall!

Also, funny enough, the item on the teaser list directly after “Ancient Evils” is ” ‘Eavy Metal” – now I know that ‘Eavy Metal is a painting column, but c’mon! One of the writers/graphic designers must have been playing with the double meaning there.

I’m really just hoping for Necrons in April. New Codex or Forgebane, I want the Necrons to get some love. I don’t even play Necrons! But I do enjoy playing against this army and I want to see it pass it’s Reanimation Protocols and return to the tabletop in April!

So what do you think? Necrons in April or is something more Ancient-er and/or Evil-er in store?