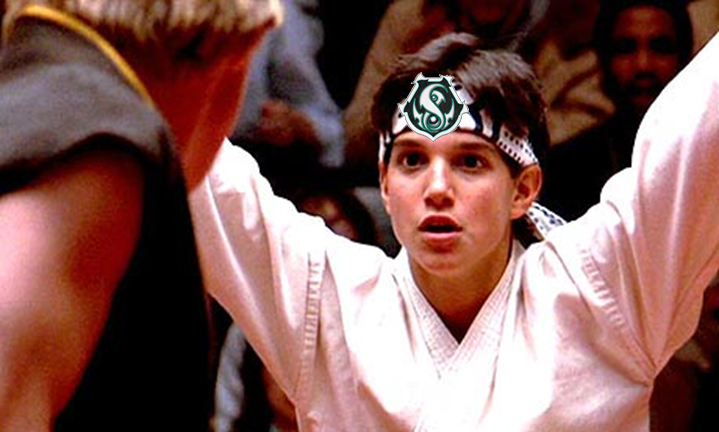 What’s the least-used model/unit in Retribution of Scyrah? Can a list highlight them?

Chalkboard here from Chalkboard War, with part eight of a series on underdogs in Warmachine and Hordes. If you’re a certain old age like me, you remember just how cool the film The Karate Kid was. The Cobra Kai were the big, bad, skilled guys, and Daniel was the puny underdog. And yet, through training, luck, and what now I realize is complete cheating (no blows to the head, except when our hero does them?), the scrawny kid who shouldn’t have won the fight managed to triumph. It’s a great moment in underdog cinema, and we tend to love all sorts of underdog stories. Warmachine and Hordes are no exception. Many players have that favorite piece: it may be puny and scrawny compared to what they could take, but they want to see it succeed. So that’s what I’m trying to think about for each Warmachine and Hordes faction in this series. After some thoroughly non-scientific polling, I compiled what many players agree is least-used model within each faction in the game. The goals? First, to figure out why they’re least used (meta has shifted, model is over-costed or under-powered, bad sculpt, strange rules, no clear spot, better choices for the points, no caster to pair with them, etc.). Then, to try and theorize a list that could make these underdogs shine.

Two words: Jack Marshal. Well, more like five: Jack Marshal with little upside. Jack Marshals are often an iffy bunch to begin with–many times they get fielded to not actually do the marshaling, but for the other abilities the solos (or units) can bring. And the Dawnguard Scyir doesn’t really sparkle on this account. It’s got some interesting options, but nothing that makes anyone go “whoa, this is a must include piece.” There are so many good solos in Retribution at the same cost, it’s hard to justify one (or two) of these: compare the utility of the House Shyeel Magister or the assassination threat of the Mage Hunter Assassin. The Dawnguard Scyir seems to simply not hit the table because there’s just better choices at most timings. 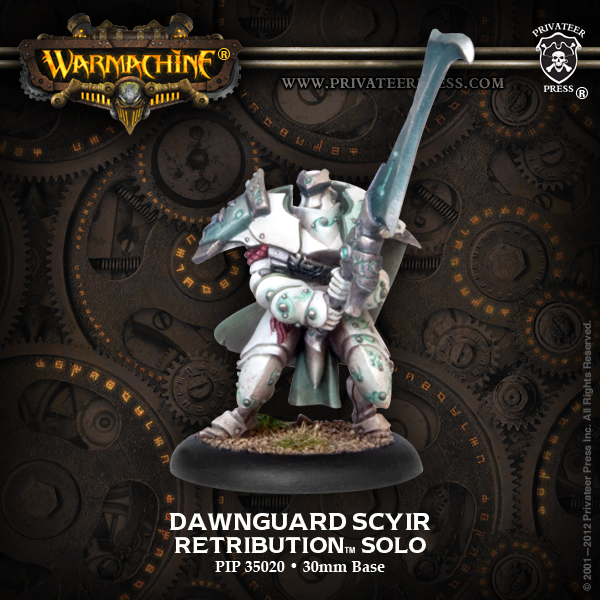 Runner Up: Nayl. Another lower cost solo for the faction, Nayl probably sees less table time simply because the model is a gamble. If you can get it to function, awesome. But if your opponent has any decent spot removal that overcomes its protections, Nayl is more liability than bonus–and thus is infrequent. Still, the cool-factor of when it works is often enough to mean it gets fielded more than the Dawnguard Scyir.

I’m going to start with the fact that I think the Jack Marshal and Drive abilities on this model are a trap–there are simply better ways to get these things in Retribution lists. Thus, I think that finding a way for the Scyir to shine means treating it as a combat solo. Critically, that means two rules need to be in operation to make the most of him: Iron Sentinel (keeping him alive better if base-to-base with a warjack) and Flank, which adds +2 to hit and an extra die of damage if a friendly warjack is also threatening the target he’s swinging at. That meant two things: fielding a fair number of melee warjacks (preferably with reach) and finding a way to improve the Scyir’s melee ability even more.

Thus, I looked at Thyron, Sword of Truth leading a myrmidon-laden list to make the Scyir shine. His feat won’t affect the Dawnguard Scyir directly, but it can let the myrmidons side step into the best positions where Scyir charges will also leave them in base-to-base with the friendly jacks. And then Storm Rager upkept on one Scyir, or on a critical turn cycled from one to the other, can let them punch even harder with their swing. The trick in making them the stars to the show is letting the myrmidons do the work clearing the chaff, and getting a fair amount of damage onto the harder targets–allowing the Scyir to charge in and hopefully act as the finisher, “mopping up” the target with four dice and +2 Strength charges if all goes according to plan. Like a crane kick to the villain’s face.

Mop Up On Aisle 4 Tactics: The myrmidons all have ways of harming infantry pretty well–either through covering fire that keeps them away or bursts of flame/continuous fire to finish them out. With them on clearance duty, hopefully they can take a few strikes at heavier targets as well as they roll in. The pair of Ghost Snipers and Eiryss1 also serve to damage critical portions of enemy heavies. That way the Scyir is set up to close things out. They roll in against those heavies that survive but are in melee range of the Myrmidons and hopefully land finishing strikes (while ending base to base for the Iron Sentinel bonus. With the right use of the heavies in keeping foes contained except for enemy heavies, the hope is that the foe will have to rush those up to try and make an opportunity for the rest of the force. With the little more “oomph” that the Scyir has the potential to provide, the piece trade can hopefully start to fall in favor of the Retribution force.

Underdog Grade: Yeah, this isn’t so much Karate Kid as it is Little Miss Sunshine. As in: “awww, it’s cute that you tried to make it in the big leagues but simply were not cut out for the competition.” 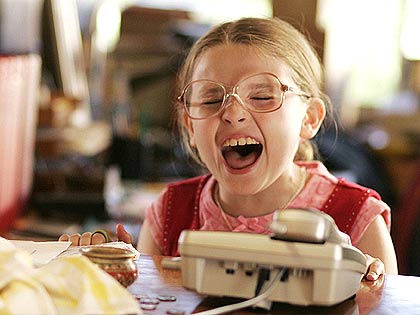 The Dawnguard is just screaming for joy that it got a call to join a list.

At every point in this list, Mage Hunter Assassins would accomplish everything the Scyir can do plus more. And in pretty much any lists. And the same holds true if I had used the Scyirs as Jack Marshals, I think. Retribution has two other Jack Marshal options, both of which seem to be better (not to mention Elara, the Journeyman Warcaster). The Dawnguard Invictors can do it if you’re simply looking to ease some Focus burden on specific myrmidons, and the Dawnguard Sentinels can do the same, with their UA providing a much better Drive ability for the marshaled warjacks. The Scyir’s Drive ability isn’t even good for fishing for critical effects, as it only allows marshaled myrmidons to re-roll missed attacks. As the grade above suggests–I worry that this model is simply not as good as the other options that compete with him.

~ What would you pair with the Dawnguard Scyir to make them better? Is there any chance for an underdog story on this one?

Interested in what underdogs the author is fielding? Check out Chalkboard’s blog at